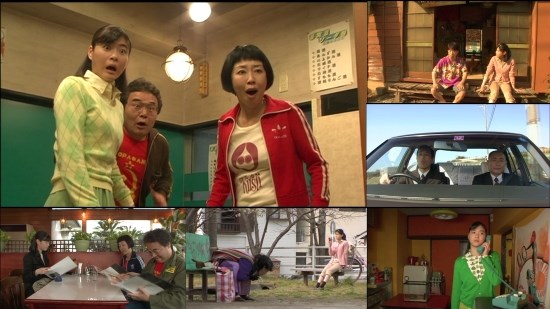 Suzume Katakura whiles away her days bored and resigned to a life of monotony and insignificance: she is neglected by her husband who is away on business and only calls her to check up on their pet turtle, she feels constantly in the shadow of her more spontaneous and outgoing best friend Kujaku and is even ignored by strangers. By happy accident she discovers an advertisement for a career in espionage and decides that learning to be a spy is the perfect antidote to her uneventful life. In this at least Suzume is right: her life soon becomes anything but uneventful, although not in the way she could’ve anticipated.

Juri Ueno (who has since gained attention through the live-action adaptation of Nodame Cantabile) is on fine deadpan form here, acting as an ideal foil for writer/director Satoshi Miki’s offbeat and absurd character and situation-comedy. Her down-to-earth and sensible persona is surrounded by a varied and eccentric cast – this is perhaps why she’s perfect as a sleeper agent but the fact that her character is also the only semblance of normality in the entire movie is one of many often subtle yet decidedly funny gags.

The town where Suzume lives is decidedly strange already, but when her career as a spy gets underway she discovers that the people and places there are even weirder than they first appear. There are some nice surprises in the supporting cast here: Yuu Aoi, who lent such dramatic weight to the troubled Shiori in All About Lily Chou-chou and the enigmatic Tanyu in the Mushishi live-action film is instead unpredictable and in-your-face as Kujaku. Yoshiyuki Morishita, who strikes me as one of those actors who’s naturally funny without needing to speak a word of dialogue, makes for a delightfully eccentric shopkeeper.

The comedy is full of non-sequiturs and often features sudden unexpected developments and quirkiness; it’s very farcical but since the jokes are often visual rather than pun- or wordplay-based there’s little that is lost in translation. The liberal and consistent sprinkling of humour throughout the film means that there’s never a dull moment so there are no extended periods that fail to raise a smile. After a while I started to ‘tune in’ to the film’s own twisted logic and found its style quite charming.

The pacing doesn’t lose momentum but the plot itself is less solid: there are no big mysteries to solve and no clear thread apart from that of Suzume learning how to become a spy (which is hilarious in itself when you look at the so-called spies who are training her). The narrative occasionally jumps backwards with flashbacks to flesh out the characters and most of the screen time is devoted to discovering how they are connected and how it wraps up the whole affair. Perhaps surprisingly for a movie about spies Turtles is, perhaps intentionally, devoid of suspense, gunfights or frenetic action.

If the storyline is vague and there’s so much humour, what exactly is this film trying to tell us? It’s certainly fun to watch and visually it’s colourful and vibrant, along the same lines visually as Kamikaze Girls or Amélie. It also has a few things to say about the humdrum and routine nature of everyday life: as we follow Suzume in her quest to find something to spice up her mundane existence and learn more about the oddball characters who surround her, she consciously tries to be ‘ordinary’ like a proper undercover spy but starts to question what ‘ordinary’ really means.

Through its weird characters and unlikely occurrences Turtles makes some quite pointed observations about how the ordinary often hides extraordinary things. There’s a ramen shop owner whose food is notorious for being so-so and unremarkable (if I were to explain the reason for this I’d be giving an important plot point away) but the scene in which he reflects on how he could make a great bowl of ramen if the situation were to arise struck me as quite moving and profound; the time when Suzume visits her father and the two of them reflect on the passing of time was also quite poignant.

This is one aspect of the movie that I felt could have been explored further, but it instead feels like a dead end. If a deeper meaning is intended to be drawn from this story, it’s obscured by the trivial events whose drama is often lessened in favour of comedy value. The film really thrives on the strength of its cast and how they react to the weirdness that Miki’s writing throws at them but since there’s not much substance plot-wise I started to question what the point of it all was.

Then I remembered how I’d spent an hour and a half grinning like an idiot and laughing out loud unexpectedly, which is I think the true aim of the exercise. The early part of the film might suggest it’s one of those ambitious commentaries on the absurdness of the everyday but it is ultimately something more modest and low-key. When it’s as well-acted and fun as this though, that’s just about enough.

7
Although it feels lightweight and directionless, Turtles is an eccentric and undeniably fun caper brimming with absurd situations and colourful characters.
LATEST REVIEWS