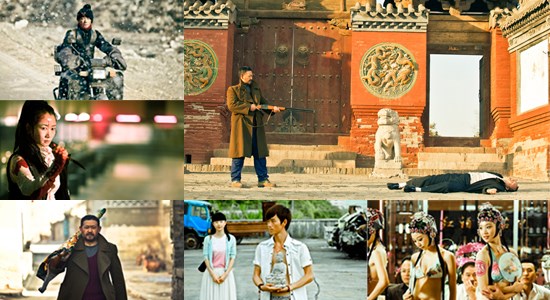 Director Jia Zhangke has long been regarded as one of the best directors working in China at the present time. His work spans many different media, moving between fiction films and documentaries and occasionally ending up somewhere in between. Up to now his narrative films have followed a naturalistic style, but A Touch of Sin marks a slight detour as he engages with a previously unfamiliar genre - the wuxia film. The English title of the film is a sort of homage to the famous King Hu movie A Touch of Zen - the famously spiritual wuxia film featuring a bumbling scholar and a vengeful female swordswoman. However, Jia’s film is a far more modern approach which adopts some wuxia trappings rather the sweeping martial arts epics enthusiasts might associate with ‘wuxia’ brand. The film takes the form of four interwoven short stories in which each protagonist commits an act of violence brought about, to some degree, by fatalistic or societal pressures.

The film begins with Dahai - a former miner who is concerned and increasingly angry with the bigwigs in his village who promised to share the profits from the mine's sale with the impoverished villagers. Predictably, they haven’t kept any of their promises, preferring to drive around in expensive cars and own their own jet planes. Finally, he decides to take some restorative justice into his own hands. Next up is Zhou San, who has a wife and son he barely sees at home - he tells people he's a migrant worker, but really he earns most of his money through modern day banditry and isn’t afraid to turn to lethal methods if it will get the job done faster and cleaner. His story gives way to that of Zheng Xiaoyu, who works as a receptionist at a ‘massage parlour’ and is having an affair with a non-committal married man. When two gangsters refuse to believe she just works on reception and doesn’t get involved in ‘other services’, she’s forced to defend herself by whatever means possible. Then there’s Xiaohui, who works at Xiaoyu’s boyfriend’s factory - that is until he’s chatting with a colleague one day who gets distracted and catches his hand in the machinery. Forced to make up his friend’s shifts for zero pay he skips town, catching a gig as a waiter in a fancy ‘hotel’ (also geared towards providing ‘other services’, presumably for businessmen), but it’s not long before he moves on again to another factory and begins to get fed up with the aimless and repetitive drifting nature of his life.

In Jia’s conception of modern day China, there are no shortage of reasons why people end up turning to violence to solve their problems, or even just to make themselves feel better in someway. Dahai feels betrayed and belittled by people who are no better than he is, but with a shotgun in his hands what does a shiny sports car matter? Likewise, Zhou San could have stayed in his village working a menial job for no money but there’s a romantic allure to his life of itinerant crime - at least he’s living his own life, on his own terms and a slave to no man. Zheng Xiaoyu was unlucky in love and then threatened by violent men who refuse to believe there are things money can’t buy. It’s difficult to regard her actions as sinful so much as aggressive self defence. Xaiohui’s story is the saddest - a tale of modern disillusionment that sadly feels timeless and inevitable; unable to find a place in the world and brokenhearted, his final act is all too human.

In the post show question and answer session, Jia remarked on his intense love of John Woo films as a young man - in fact he’s referenced the director in previous films before, most notably in Still Life which features a young guy completely obsessed with Chow Yun-Fat’s character in A Better Tomorrow. The early action scenes with Zhou San effortlessly taking out a group of thugs who’ve picked the wrong biker to shake down and Dahai’s crazed glee with his shotgun have something of Woo’s achingly cool violent aesthetic, but perhaps the most striking sequence is Zheng Xiaoyu’s blood spattered fruit knife dance of vengeance. Deliberately given a ‘60s style haircut reminiscent of the heroine of Touch of Zen, there’s a sort of nobility in her refusal to bow down to the demands of these intimidating men, one of whom proceeds to beat her with money, trying to dominate her with his financial status rather than his physical prowess. Perhaps she represents the difficult situation of these downtrodden women locked into the sex industry (even if only on the edges) due to lack of other available options. The woman that Xiaohui meets in the brothel masquerading as a business hotel is another who’s unhappy with her current way of life, but is unable to simply change and move on in the way the Xioahui can simply through being a cocky young boy. Even if the film gives in to a Woo style in places, revelling the uneasy glamour of violence, it’s clear that the greatest violent act is the one this society is inflicting on its subjects. There is precious little room for love or human kindness in this extremely harsh and unforgiving environment.

Hardly a glowing portrait of ‘the new China’, it’s not a surprise that A Touch of Sin hasn’t gone down well with China’s board of censorship. The picture it paints is bleak, but perhaps not restricted to China alone even if the effects of China’s recent and rapid industrialisation and modernisation have lead to vast inequalities in wealth and a perceived decline in moral values. This film is not without faults - it runs a little long and its four strands don’t always have the interplay you’d like them to have - but its examination of the root causes and effects of violence is both timely and important. A Touch of Sin does run close to providing a justification of violence as opposed to condemning the uncaring society that permits it, but never quite crosses this line. Flawed, but beautifully so, A Touch of Sin is another important examination of the state of modern China from one of its most fearless artists.

A Touch of Sin was screened at the BFI alongside an onstage interview with director Jia Zhangke as part of the Chinese Visual Festival on 8th May 2014. It will be released theatrically by Arrow Films from 16th May.