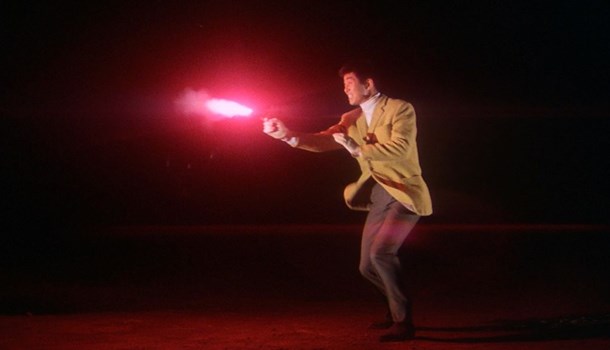 It took seeing the film at the cinema, snug in the biggest of the BFI Southbank's screens, for me to fully appreciate what I’d always known. Not only was Tokyo Drifter (1966) near as dammit the ultimate pop-art gangster (OK, yakuza but to place it a wider context: gangster, underworld, etc.) movie it was also perhaps the most absurd. Tokyo Drifter was also the first Seijun Suzuki film I ever saw, quickly followed by Branded to Kill (still perhaps my favourite).

Boss Kurata (Ryuji Kita) has gone straight and with him Tetsu the Phoenix (Tetsuya Watari). But the Otsuka concern want Kurata’s building and to pull him back into the Yakuza. Plots abound and it may be the only way to settle old scores peacefully is for loyal Tetsu to leave his boss and drift...

The plot of Tokyo Drifter is not too dissimilar to a million other 1960's yakuza potboilers, though here it is pared down as close to the bone as possible and treated with more than a dash of absurdist humour. There are plots, schemes, crosses, double crosses, murders intentional and unintentional, vendettas and so forth, but unlike some of director Seijun Suzuki’s earlier work the plot makes perfect sense (try The Flowers and the Angry Waves for narrative overload where all you can do is just sit back and enjoy the style). There’s nothing much in the story on paper that really separates it from all manner of forgotten films, but bear in mind that unlike his contemporary Shohei Imamura, the studio, Nikkatsu, weren’t interested in Suzuki making unusual, or stylistically or narratively  sophisticated films, they wanted quota quickies for Japanese audiences that made money. And similar to early silent films, they were viewed as ephemera, nothing to be revisited and certainly the idea of cinematic posterity couldn’t have been further from the studio’s mind. Yet Suzuki took the commonplace and produced a film that is stylish, funny, absurd, and with frequent intentional narrative non-sequiturs. (In)Famously, of course it caused Nikkatsu to censure Suzuki (again) and would force him to work in black and white for what would end up being his two last films for a decade (Fighting Elegy and Branded to Kill).

The opening really sets us up for what we’re about to watch, iconoclastic and summing up Tetsu’s character perfectly. Filmed in washed out black and white, Tetsu getting a kicking to check if he really is no longer a vicious yakuza dog, and ends with a splash of expressionistic colour, before thumping into the title theme song, sung by none other than Tetsuya Watari, Tetsu himself. Self-consciously, Watari as Tetsu will sing or whistle the song throughout the film, not just as a musical motif but often as a mechanism to distract those who mean him harm. Suzuki clearly knows what he’s asking of Watari and what could be a tedious conceit instead becomes part of the fabric of the film, just like Watari’s clothing and the colours and lighting of the sets. Colour and the construction of the image is precise in Tokyo Drifter, frequently reflecting the emotions of the characters, the colour scheme of a scene switching from white to blood red or, as Suzuki tends to, washing the screen in swathes of yellow. It's a beautifully constructed artifice and often the contents of a scene are colour-coded to match in a manner not dissimilar to what John Boorman would do in Point Blank a year later to great acclaim.

Just as Suzuki keeps the film visually interesting, he also utilises his signature “time and space mean nothing in my films” editing style, cutting out many of the shots that join up scenes that  can needle the audience and sometimes causes a certain amount of disorientation - but it’s a good disorientation. It also cuts out a lot of the possible crap in the film, ensuring that we get into the meat of a scene without any of the fluff around it. Arguably the time/space conceit fits more snugly into Branded to Kill and his later Taisho Trilogy but again it shows Suzuki straining at the leash of what his superiors expected of him. It also reminds you of the screenwriting maxim that in any scene you should get in late and get out early. Suzuki often takes this several steps further, cutting scenes down to just those exact moments needed to progress the story. 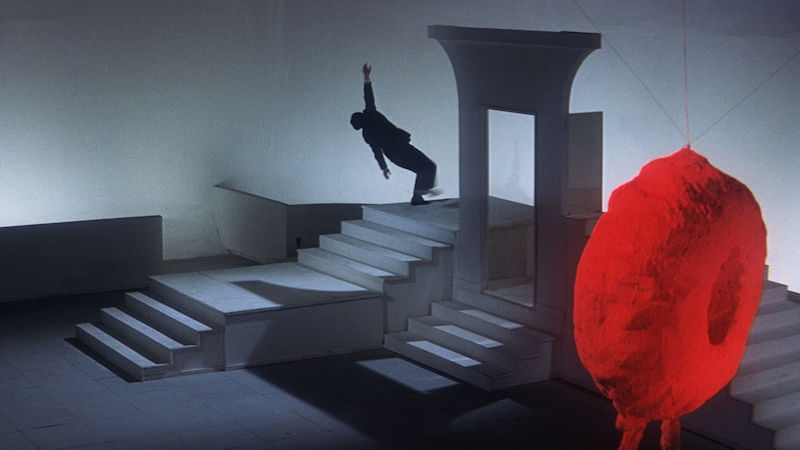 Not your average yakuza movie set

Then there is the absurdity. Some of this is totally at face value; the saloon fight as Tetsu takes to wandering, between American sailors, Japanese bar patrons, yakuza and more women than you’d expect to be employed in such a bar, is a bonkers pastiche of American Western punch-ups taken to ludicrous extremes. Parts of the bar collapse, the singing women lead the Americans into a march, then knock them unconscious and all the men swing their fists with exaggerated abandon as Suzuki seems to revel in the genre mash-up piss-take. It’s also bloody good fun and - importantly - part of the narrative, not just a distraction; other set pieces are rarely quite so extreme in their overt ludicrousness (some come close like the wannabe samurai bumpkin yakuza), but though Suzuki constantly injects humour, he is unafraid to be serious. A gangster’s moll, accidentally shot, is treated with unusual visual solemnity. The core relationships, too, matter. Tetsu’s relationship to his boss Kurata is more father and son in nature, making any change to this relationship more meaningful; Tetsu’s girl Chiharu clearly has depths of feeling for him – even if Tetsu like a Western hero is more likely to wander alone; even some of the more villainous characters have honest emotions and there is an intriguing double for Tetsu, Tatsu (the name kinda gives it away); Tatsu being the killer Tetsu had been, and who is similarly unable to escape his past.

Like so many films, it’s better to go into Tokyo Drifter without knowing too much just relish the experience. Suzuki shows us how well you can make a gold purse out of a sow’s ear when it comes to plot. It's helped by a solid set of characters, some of whom, like the perennially dark glass wearing Otsuka (really, Suzuki loves to slam the camera into crazed extreme close-ups of those dark glasses), are more of the snarling villain end of the spectrum, but when it comes to the core of the film and the relationship between Kurata and Tetsu, Tetsu and Chiharu, then later Tetsu and another wanderer, Aizawa, these are surprisingly well nailed down in terms of both the characters and the performances, which are better than you expect in a lot of the genre films of the period. Admittedly we’re not quite yet to the more extreme end of the genre spectrum where some performances could get wildly pantomime. Tetsuya Watari as Tetsu has natural charm and is always a really solid leading man in action films. Chiharu’s affection for him is understandable but there’s also a real warmth in his scenes with Ryuji Kita, as Kurata. Hideaki Nitani who later joins the film as the more experienced wanderer, Aizawa, has an aura of quiet gravity and a weary twinkle in the eye. Even Chieko Matsubara as Chiharu seems to have a much meatier role than many women in such films, and as she sings, so does Matsubara seethe emotion.

Tokyo Drifter to me is not Suzuki’s best film - I love Branded to Kill, the Taisho Trilogy and Pistol Opera even more - but it was the first Japanese genre film I can remember watching and I can vividly remember being shown the first moments, with the high contrast black and white, the careful construction of the image, the industrial wasteland in the background and almost all aspects of it, even down to the yakuza reporting to his boss in the car that Tetsu wilfully took his kicking, to that splash of colour in-between the train carriages, yet it was over 25 years ago. Some films stay with you, and some films deserve to stay with you.  Tokyo Drifter is both. It is also a classic of genre movies, any genre, though I think most would argue at this point in his career, Seijun Suzuki was pretty close to a genre unto himself.

Blu-ray of the film is available in a swanky but understandably costly package by Criterion. For those wanting to own it for a bit less, the DVD print is still a good one, though wait for a discount on the Blu-ray or be lucky and see it as I did in the cinema (hopefully without some likely drunken guy randomly shouting out stuff: “Run away! Run away!” I was waiting for the bar fight from the film to repeat, just in the cinema, to quieten the guy down. It didn’t happen). 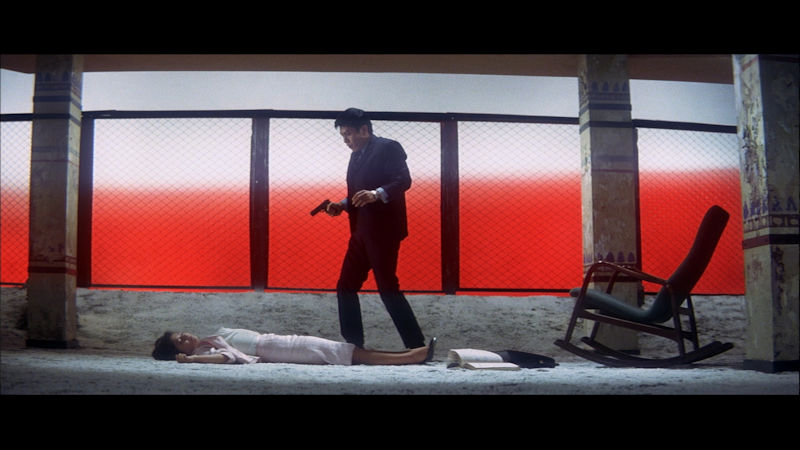 9
A classic of genre movies, any genre: absurd, inventive and subversive
LATEST REVIEWS