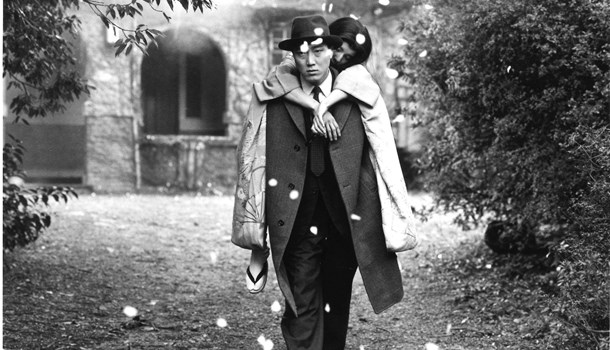 Still, as I received my review copy it was all a bit hazy; I couldn’t remember much about the film except a detective, boiled eggs, the air of mystery and the feeling it was something unique. In short, my feeling about the film lingered even when the story did not. There’s a part of me that’s fascinated by how a film can affect a person so strongly even when the specifics dissipate, but of course this means Arrow’s decision to release this restored version of the film meant I might find returning to it disappointing. Let's see.

Bellflower has been kidnapped! Her mother, aging silent film star, Madame Sakura, sends her butler to hire a Detective, Uotsuka and his sidekick Kobayashi to find Bellflower. Their only clue is a mysterious message from M. Pathe & Co. with hints to her location, and where to bring the one million yen demanded for her release.

To quote The Manchurian Candidate: now, this is very important! Ignore my synopsis. In fact, ignore almost any synopsis concerning To Sleep So As To Dream. Better yet please, please do not read any more detailed synopsis because mine if anything obfuscates much of what the film is about – admittedly intentionally so; because To Sleep So As To Dream is one of those films that tells a story that, like the title suggests, is dream-like and should be allowed to unfold as such, so that as you understand where the story is going it does so organically; it is also a film that is stylistically very precise and assured - the mechanism of the films creation and style are integral to its beauty and its brilliance.

You may have guessed; I was not disappointed.

To Sleep So As To Dream is unusual in how it is a remarkably textually rich film, while at the same time floats before us like a fever dream. It manages to reference Sherlock Holmes as Uotsuka may not smoke but he eats boiled eggs like Holmes smokes pipes; the villain, M. Pathe and Co., will to anyone who has a reasonable knowledge of early cinema scream hints as to where the story is really going; Billy Wilder’s Sunset Boulevard looms large over the narrative, as does silent cinema especially; you wonder if Hayashi has been watching some silent chanbarra films, too. And, oh, there’s so much more, much that I suspect will have gone over my ignorant head.

Set in the early Showa period, yes, To Sleep So As To Dream is filmed in black and white and is almost a silent film but this is not just a stylistic conceit, not in the slightest. Almost all the dialogue is written as title-cards, with sound intruding in the form of sound effects, music (both diegetic or not) and announcements. On the surface this draws us more deeply into the picture, focussing our attention into the visual splendour before us and my To Sleep So As To Dream is a subtly beautiful film to behold. The crisp black and white of the restored film, the compositions, the set designs and locations, are that sublimely beautiful black and white that just seems improbably cinematic, to the point where it seems to render colour meaningless. But as I said the mainly silent cinematic approach is not a conceit, it is integral to the story that is told, and this is where I shall intentionally say no more, because investigating with Uotsuka is one of the joys of the film, a joy that you can see unfolding before you, approaching you, the narrative gorgeously, dreamily unpacking itself so that you start to pull together elements of the film so that you eventually know what’s coming, but as you feel it approach it is not a case of "oh-bloody-hell-what-a-predictable-story event" because the film is so rich in longing, loss, fleeting beauty and recognising the film’s cinematic references instead as the end of the film hoves into view. It’s filled with a joyous warmth of knowing that the film, the story and the characters are all coming together into a moment that is almost perfectly consummated. It reminded me of reading Angela Carter’s Wise Children for the first time, where, as the denouement was almost upon me, I wondered: how on earth can she finish the book without it feeling like a let-down? Then the ending hits, pitch perfect. To Sleep So As To Dream is similar, ending on just the right tone, pulling together all its thematic richness and cinematic references into a wonderfully apposite ending. 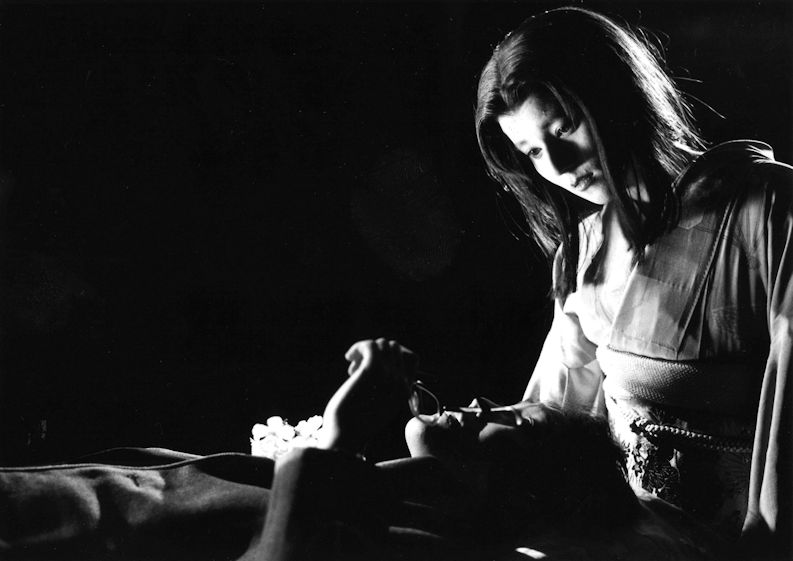 But it is the dreamlike journey that really draws you in: its glorious set of repeating characters and cinematic sequences hypnotise you. The three villains foxing our detectives, appearing, as magicians, as stage performers, as gangsters, all have a joyous playfulness about them: their silent film pantomimic performances slyly melodramatic and knowing. Ah yes, those performances; all the actors bear many of the hallmarks of the silent pantomimic performance, but often this is portrayed in the best Mary Pickford tradition of acting: the subtle change in expression yet with great humour and not the more outrageous eat the scenery pantomime silent film acting can sometimes be (Yoshio Yoshida as the butler is especially wonderful); yet there is often the hint of Chaplin in the villains – one even wears Chaplin’s trademark moustache when as-villain-as-gangster. In each performance there’s a sense of the actor utterly committing to the feel of the film and the sense of fun they are having in their performances shines. It’s an unusual film, nearly silent... except, most fascinatingly – more so for me as I read about them only a week or so before – one extended sequence that includes a Benshi, the narrator who would, as a silent film rolled, as the musicians played, narrate the story. Damn, anyone who saw A Page of Madness (1926) recently at the BFI Southbank will likely be saying: why? Why didn’t we have one for that film? as it needed it. True to the film’s styling, the Benshi speaks! No title-cards.

What’s clear to me is that though To Sleep So As To Dream is not a well-known film, though it absolutely deserves to be, is that it has a potentially very wide audience. Silent film aficionados will likely find its reverential and referential nature a constant source of joy; cinephiles in general tend to love curious oddities like To Sleep So As To Dream being their meat and drink; it fits within the type of artificially constructed art cinema akin to a director like Guy Maddin. Moreover, it’s just a fascinatingly, beautiful dream of a film that deserves credit for its uniqueness, its visual beauty, and its deliriously lovingly constructed narrative.

I often think of a film in terms of not just of if I liked it or not but if you removed it from existence would cinema be any less rich? If this seems odd: imagine if one of the myriad Showa-era Godzilla sequels was removed from existence then likely cinema would not be any less rich, but cinema would be poorer if the original Godzilla was effaced from history. I feel that cinema is immensely richer for the existence of To Sleep So As To Dream. Moreover, I don’t understand why people are not screaming about this film from the rooftops. The director only ever made a handful of films, most of them over a ten year period; I’ve only been able to see three of his films (the other is Zipang, 1990), two have lingered with me more than most films I’ve watched and both To Sleep So As To Dream and The Most Terrible Time in my Life are deliriously entertaining, while artistically fascinating. How has Hayashi never found traction? Well, let’s hope that the release of this restored film is the start of a Kaizo Hayashi renaissance because To Sleep So As To Dream deserves to be considered a classic. And just then remember that this was his first film, which makes it an even more remarkable effort.

Now, it is time for me to climb up on to the roof and start shouting.

Afterword: some reviews write themselves, some are painful, some are just plain difficult. This one was difficult. There are films you can compare, in part, to To Sleep So As To Dream and there is a lot I want to say about the narrative, how it pieces together in its intricacy but it would give so much away and I want you to find that out for yourself. So for all my ranting and obvious joy with this film I feel it is almost impossible to do it justice. Dammit, I need a second review with spoilers!