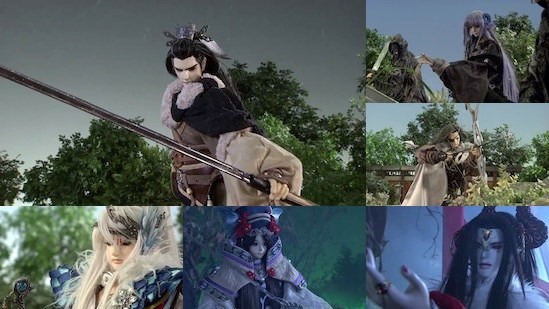 Gen Urobuchi is a busy man. After penning light novels, visual novels, anime and tokusatsu the man behind Madoka Magica, Saya No Uta, Kamen Rider Gaim and more is now trying his hand at a different medium. While visiting Taiwan as a guest at a convention, Urobuchi came across puppet production company Pili International Media and was so impressed with this unique art form that a collaboration between Pili, Nitroplus and Good Smile Company was put forward. Thus, Thunderbolt Fantasy was born. Airing in Taiwanese, Mandarin Chinese and Japanese across Taiwan, China and Japan, this series has already set itself up to be a real oddity amongst the usual summer offerings - and one of the most unique experiences fans will have at their fingertips.

Taking place in an Eastern fantasy setting, Thunderbolt Fantasy opens with the brother/sister guardians of the mystical Tiān Xíng Jiàn sword under attack from the evil Xuán Guǐ Zōng clan. When her brother falls in battle, Dān Fěi is able to escape and soon finds herself in the care of wandering swordsman Shāng Bù Huàn. After Shāng defeats one of Dān Fěi’s pursuers, he also finds himself a target of the Xuán Guǐ Zōng clan and their leader Miè Tiān Há. Much to his chagrin Shāng finds himself coaxed into becoming Dān Fěi’s protector by the mysterious Lǐn Xuě Yā, as the group begin a journey to the Seven Sins Tower in the Demon Spine Mountains.

Anyone who has ever had some familiarity with the works of Gerry Anderson (creator of Thunderbirds, Captain Scarlet and Stingray to name a few) should already be right at home with the puppet stylings of Thunderbolt Fantasy, but what they might not be prepared for is just how much further both Pili and Taiwan puppetry push the envelope when it comes to special effects. From the very first episode you’re greeted with puppets running, performing mid-air flips and clashing steel in the same manner you’d expect from an animated venture. And if that isn’t enough to convince you, there’s also blood spurting with all the subtlety of a b-list horror film. But of course, all of this is happening to the same puppets whose lips barely move with their speech, and emote purely by waving their arms around in typical puppet fashion. Thunderbolt Fantasy is often cheesy and almost always completely over the top, but at the same time it’s bursting with expressiveness in a way few other mediums can match. Also if you’re really interested in the production element be sure to check out “episode 0”, which offers an excellent behind the scenes look at the show and just how much effort goes into it.

It’s important that the visuals make such an impact, because in terms of story Thunderbolt Fantasy isn’t really bringing anything new to the table. Whereas the finer details will constantly differ, the story of a group of warriors on an epic quest to defeat evil and getting new recruits along the way is hardly original - just look at any JRPG game ever made. However that fact the such a formula has managed to survive over time with so many variations is a testament to just how engaging it can be, and so far Thunderbolt Fantasy has gotten its journey off to an excellent start.

What does set it apart though is the characters, and just how much fun Urobuchi seems to be having revelling in the ridiculousness of it all. The dialogue is wonderfully hammy, and the characters themselves all prove memorable while bouncing off of each other well. Whether its laughing at Shāng’s bewilderment at the whole situation or pondering the enigma that is Lǐn Xuě Yā, every character has something to offer. Thankfully Urobuchi is also quick to dispel the idea that Dān Fěi is going to be little more than a damsel in distress, revealing herself as a more than capable fighter by the end of the third episode. With the cast already bolstered by the “Sharp-Eyed Impaler” Shòu Yún Xiāo, “Frozen Wonder” Juǎn Cán Yún and demonic necromancer Xíng Hài, Thunderbolt Fantasy has shaped itself a credible fighting force in only a few short episodes.

However if there’s one aspect of Thunderbolt Fantasy that’s difficult to get over, it isn’t the visuals - it’s Crunchyroll’s overall presentation of the series. Although the simulcast uses the Japanese audio, the subtitles use the Chinese character names - creating a disconnect between the two scripts as you are hearing one thing and reading another. Reading the Chinese names does admittedly create a more “authentic” experience for the viewer, but it does make remember the characters’ names a bit of a nightmare - let alone remembering how to spell them without reference.

Story-wise Thunderbolt Fantasy might not be the most original thing you’ll ever watch, but visually its an experience that you’re highly unlikely to find anywhere else this season. If you like the sound of watching puppets battle it out in a fits of flash and over the top violence, then this is certainly worth your time. It isn’t just a show for Urobuchi diehards nostalgic Thunderbirds fans such as myself, its for anyone eager to check out something a little different among their weekly anime fix.

You can currently watch Thunderbolt Fantasy in streaming form on Crunchyroll.

8
Thunderbolts are go as Urobuchi and company deliver a mesmerising slice of puppet insanity.