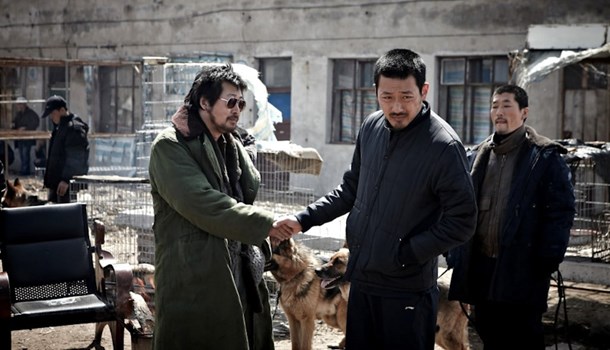 Gu-nam is a taxi driver with a gambling problem. If the gambling wasn’t enough to get him into trouble, he’s also in debt to some gangsters over the money for his wife’s passage to South Korea. His wife was meant to be sending the money she’d make there back to him and their daughter to help pay off the debt, but no one’s heard from her in months. The obvious assumption is that she’s made a new life for herself and doesn’t want to be found, but Gu-nam can’t quite bring himself to believe it. As a Joseonjok - a Chinese Korean from the Yanbian Korean Autonomous Prefecture - Gu-nam and his family had little chance of living an honest and prosperous life. Disowned by both China and Korea, many Joseonjoks are forced to resort to criminality in order to survive.

Just as it seems things are about to hit a crisis point, Gu-nam receives an interesting job opportunity. Myun-ga, the dog seller at the market, suggests Gu-nam go to South Korea, kill a prominent businessman, look for his wife and return back to China (with the businessman’s thumb for proof). Assuming all goes well, Gu-nam will receive the pin number for an account with 57,000 Yuan, maybe return with his wife in tow or at least find out once and for all what the situation is between them and finally get these gangsters off his back. Still, sneaking into South Korea and committing a murder - it’s a big ask, and first off Gu-nam rejects the idea out of hand. However, one conversation with his decidedly tough mother later and Gu-nam has accepted. When he gets to Korea though he finds things aren’t as simple as Myun-ga made out, there seems to be a much bigger game in play than Gu-nam bargained for and it’s not long before he’s running from the police, gangsters, and just about everyone else.

If there’s one thing there’s a lot of in this film, it’s running. I can’t think of another film that manages to make a good old-fashioned foot chase quite so exciting. The set pieces are quite astonishing - multiple car pile-ups; police driving into and over each other; an extended chase sequence through a cargo boat - the list goes on, all with Gu-nam running desperately towards the camera. Propelled by pure survival instinct and later an intense need for revenge and an explanation, Gu-nam keeps running no matter what is coming for him.

One of those things is, of course, Myun-ga, who now has a total mess on his hands that’s threatening to derail all of his current business arrangements (well, except the dog selling - something to fall back on). If there’s another thing there’s a lot of in this film, it’s stabbing (and later axe wielding). Luckily for him it seems Myun-ga is something of an expert at this as we find out in one scene where we see him, badly wounded, enter a room full of angry gangsters - the camera cuts away and we return to find all of the gangsters seemingly dead with very little fuss. He even tries to kill someone with a lamb bone at point - Myun-ga is certainly not someone I’d want to be meeting on a dark night (or ever buy a dog from). He is though, one of the most compelling film villains of recent years.

Speaking of stabbings, I should say that this is a very violent and extremely bloody film. If you’re well versed in Korean crime dramas, you might be aware that South Korea has very tight gun laws, so much so that not even the toughest gangsters carry guns. Consequently what you have here is a lot of people sneaking around trying to get the drop on each other to stick the knife (or occasionally, hatchet) in. Obviously, it’s much quieter than gunfire but also much messier and much more physical. The only guns in the film are those of the police, who are largely depicted as bumbling idiots who can’t tell one end of a gun from another.

This Bounty Films release (distributed by Eureka Entertainment in the UK) is the shorter 140 minute ‘Director’s Cut’. There is, however, some controversy about whether it really is a director’s cut or an international version prepared for the films co-producers Fox International - for the record it runs about sixteen minutes shorter than the version seen in Korea. Despite being the shorter edition, it does still feel a little long at times and it’s really pushing the ideal running time for a thriller of this kind. Nevertheless, it’s genuinely thrilling throughout with a streak of morbid humour running right through it. A sad meditation on the futility of life, particularly for those who find themselves at the bottom of the pile and are forced to scrap like dogs for the little other people have left behind, The Yellow Sea is an exciting addition to the recent wave of Korean crime thrillers. Following on from his impressive debut, The Chaser, The Yellow Sea certainly catapults director Na Hong-jin right into the top tier of Korean cinema.

Korean with English subtitles. Extras consist of a "Making of" documentary and trailers.

8
Slightly overlong but Na Hong-jin’s latest thriller certainly doesn’t skimp in the excitement stakes. A highly accomplished film in all areas and a must see for fans of Korean cinema.
LATEST REVIEWS