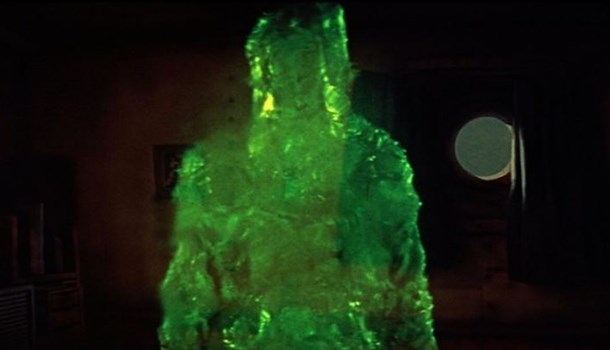 Once again we enter the world of director Ishiro Honda, though this time no Godzilla and no kaiju, but we do have The H-Man (1958) and Battle in Outer Space (1959). Both films include the Japanese and English versions and guess what? I gave the English version the widest possible berth – it’d take more than a stomping Godzilla threatening to squish me to make me go near them!

The H-Man’s Japanese title more correctly translates to Beauty and the Liquid People, a title I rather prefer, mostly because it's more descriptive of the film. H-Man is a bit of an oddity I have to say because it’s a mix of genres: a drug deal goes wrong, because one of the men disappears leaving only his clothes. His girlfriend, Chikako, is hassled by both the drug gang and police Inspector Tominaga. Meanwhile Inspector Tominaga’s friend, the scientist Dr Masada believes that Chikako's disappearing boyfriend and other men may just have been victims of being exposed to radiation…

The mix of crime and sci-fi leads to a plot and series of characters that at times can you leave you wondering what it was that you blinked and missed. So much is packed into the film's 87 minutes that you wonder if two scripts hadn’t been smashed into one. The two elements of the film don’t always fit together and The H-Man starts as a crime drama before morphing into the more familiar sci-fi elements. That said you have to give it credit for the fact that it aims to ground the sci-fi premise in the grimier world of yakuza and dodgy drug deals. It’s a laudable ambition though I’m not sure the film quite pulls it off as it ends up feeling quite overwhelming. It reminded me a bit of Seijun Suzuki’s The Flowers and the Angry Waves in how that film is thoroughly enjoyable, but if you try following the plot too closely your head will just explode! Ironically, the story is quite straightforward but the narrative just seemed to zip about and introduce so many characters it became utterly head-spinning. It also manages to introduce two song and dance sequences! That said the premise of the liquid people (the H-Man) and how it consumes humans is viscerally disturbing, and startlingly similar to John Carpenter’s version of The Thing (From Another World). The concept of a creature absorbing you is, at an emotional level, deeply unnerving.

Intriguingly the story really pivots around Yumi Shirakawa’s Chikako, even if often more screen time is given to Inspector Tominaga (Honda and Godzilla franchise stalwart Akihiko Hirata) and Dr Masada (again Godzilla franchise familiar face Kenji Sahara). The positioning of Chikako as the central character and the obligatory love interest means Shirakawa gets a meatier role than you might expect, even if it's not massively nuanced (but then none of the characters really are). In the end it’s the concept that matters and as such all three actors give their roles a fair stab. Hirata is arguably the best, but he has a certain solid presence and recognisable face - frankly he also has that B-feature lead charm you see in certain actors around the world (similar to say Tom Conway in the Falcon movies or those produced by Val Lewton).

Let’s face it though, this is a sci-fi film and ultimately the real star of the show is the effects by Eiji Tsuburaya. The eventual H-Man, a radioactive green creature that slimes about and takes form as an ectoplasmic humanoid is eerily effective. You can imagine it giving children nightmares! The shimmering creation at times seems almost elegant yet manages to (ir)radiate menace. It’s a truly memorable creation and deserves to be up there with the greats, even if the film doesn’t quite live up to Tsuburaya’s special-effects prowess.

Musically, there are curious strains of the Forbidden Planet, the Theremin twang that accompanied the imaginary Krell creature in that film is echoed in The H-Man. I could complain, but I won’t beacause it works well here so I’m happy. If you are going to steal, steal from the best.

But what of Battle in Outer Space?

If any film can lay claim to going from the ridiculous to the sublime then Battle in Outer Space may just be it. Set in 1965 where, don't you know it, we have both a space station over our heads and TVs in our cars - the film opens with our space station opening fire upon alien ships! Bad move, because attacking unknown aliens who may be coming in peace or anger and who probably have superior tech, well, it ain’t going to go well is it? The UN decide to form a council, perfect a death ray and go into space to save us from the aliens. Oh, and there’s also some mind control and gravity inversion caused by cooling of atoms and stuff in there, too. Yes, mad as hammers time it is.

Essentially don’t worry too much about the plot, it kind of just washes over you. A bit like The H-Man but more so. The thing though with Battle in Outer Space is that the ridiculous is perhaps just too absurd. Such as why would an alien species, the Natal as they call themselves, not be able to just invade us easily if they can mind control us? Why mind control one person for some intel instead just control the lot of us? Seems much easier to me that than try and invade us, especially when they can also lift up boats and bridges using fancy tech. But I suppose we need to suspend our disbelief a little and so let’s do that because otherwise you’ll beat your head against the wall until you are unconscious. That said you then need to contend with some pretty bad acting and the UN council is legitimatly global, so you get a load of foreign actors of not the highest calibre all yakking away without much sense of urgency or skill; though they seem very adept at clapping every suggestion or resolution, which I found very, very odd indeed. Anyway, these negative aside the film manages to at least be entertaining and the manner in which the world comes together in tackling the alien menace felt refreshingly non-jingoistic, with no one nation in charge and even the experimental ray gun is shown to be an international collaboration, ditto is the eventual trip into space where no nation takes over even if there are more Japanese involved than anyone else (but it’s a Japanese film so that is to be expected).

That said as entertainment it is more throwaway than The H-Man. I’m not sure there’s a political point beyond us all working together that underpins Battle in Outer Space. To me this is backed up by how we attack first, which as already intimated you feel a colossally bad decision for any species wishing to survive. So really it’s more space adventure and some of the elements in space are quite thrilling even if the effects are somewhat dated.

Yes the effects are once again by Tsuburaya. Some of these you have to say have aged poorly, especially when you think in less than a decade a film as sleekly designed and elegantly made as 2001 would appear. Moments of it though are truly wonderful, some of the space backdrops are quite serenely beautiful if the spacecraft models themselves are budget by comparison. And those moments in space where the effects work best are definitely those fragments of the sublime and where the film is at its strongest. Early on it’s a bit flat and talky with the conference even if some mind control alien sneakiness is thrown in to add some spice to the plot. It’s definitely the weaker of the two films, the one that if was on a double bill would be listed in the smaller font. At the time it was released I can imagine how thrilling it may have seemed, ships in space with asteroids thrown at them by aliens; bases on the moon and also recognition that ships don’t have gravity, so even if people then generally walk about there is some attempt to be serious, too, in how space and flying in space is presented, something that is definitely unexpected. Sadly, it’s not Honda’s best film and he seems hamstrung at times by a script that doesn’t seem to know how to make the Earth scenes work but is better when it comes to the action. Nevertheless, as a piece of late 50s sci-fi, it’s decent enough and no worse than most of the films the US were putting out at the time. So fair play to all involved.

So these films are probably more for the completist than the idle viewer. The completist who is interested in the work of Honda and/or Sci-fi of the period. Most other folk would do best to steer clear. Still it’s pleasing to see Eureka put out the titles and in their Masters of Cinema range. This rightly recognises that Honda was no hack, but lacked the kind of budgets or control as his friend Kurosawa would have had, hampering his ability to produce films of a similar quality. While you may not want to watch these films more than once, it's a good set to with which to appreciate Honda's work - H-Man is clearly the better of the two features on offer thanks to Tsuburaya’s effects, even if some are arguably dated.

I'd say the films are worth it for his ghostly radioactive liquid people alone.

Give us a song please

6
The H-Man is an intriguing counterpart to Godzilla with some glroious effects; Battle in Outer Space is flawed but saved by some wonderful effects
LATEST REVIEWS