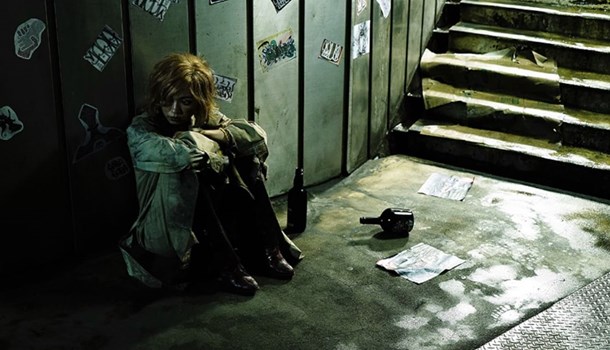 I’m sure we all have cultural blind spots. I sometimes feel I have so many I am unsure how I manage to even cross the road without being run over. One blind spot I’m continually conscious of writing for UKA is my limited knowledge of manga. But even one as ignorant as I recognise the name Tezuka and can visualise, without needing to scour what little remains of my memory, Astro Boy or Black Jack.

But about Tezuka’s Barbara the film I knew nothing and intentionally left it that way before watching it. Directed by his son, Macoto Tezka (sans “u”) it’s a very family affair.

The story is Osamu Tezuka’s take on The Tales of Hoffman, the operetta by Offenbach. I have only seen bits of the Powell & Pressburger film version of it and otherwise none the wiser of Offenbach’s story so I honestly cannot say how true that is, but we’ll trust Tezuka. Anyway, Tezuka’s Barbara is described as an adult fantasy in which popular but trashy novelist, Mikura, finds his life irrevocably altered after meeting a drunken woman, Barbara, in a subway. Finding in her a new, mocking muse, his passion for her slings him into the arcane, the occult and perhaps a way to transcend his trashy literature.

My immediate response to the story was to question how much was real and how much exists only in Mikura's head as his imagination invents a new way to write: something more unique, original? Early on we see Mikura walking into a literary schmoozing: an awards ceremony where a fellow author who is considered to have ‘merit’ is celebrated and the speech introducing him is clearly a rebuke to Mikura’s more lust filled and ephemeral work. We meet Mikura’s long-suffering agent (whenever are they not in these stories?), his china-doll of a fiancée and all we see is that Mikura is both woefully out of place in the literary world and also with his all too pitch-perfect fiancée. What feels far more real is Barbara’s drunken laughter at his attempts to write erotic fiction, or the shop assistant who seduces him while slagging off his work as being instantly forgettable - and she’s a fan- at least until Barbara appears to smash the assistant to pieces, revealing she was never anything more than a mannequin – the first of many fantastic encounters that suggest to me at least that Mikura’s mind is searching for stories and enacting these out in the world to the point where you question can her even distinguish reality or fiction anymore.

Or is perhaps Barbara a literal muse, a guiding spirit? Taking Mikura to a fetish bar, he gets into a fight with a singer who stumbles after and grabs at Barbara, desperate for her to return to him. The ambiguity then increases and that for me is definitely in the film’s favour as, like watching a film by David Lynch, the act of continuing to construct meaning is one I find deeply satisfying.

A further strength is the narrative actively looks to show that which is normally hidden. The opening sequence, culminating in Mikura meeting Barbara shows the homeless, the drunks; those corners of the city that are not romanticised skylines or recognisable landmarks that delineate a place for easy identification – like opening with a shot of London of the Houses of Parliament. Barbara is a drunk, in an underpass, collapsed close to slime-ridden steps. But for all her tattered clothes her lipstick is perfect and coloured hair is carefully unruffled. She’s a romantic, erotic vision of a chance encounter and Mikura taking her home, so their relationship begins. Throughout the film there are similar moments: Barbara drinking whiskey while rolling on a strut under a flyover; sat next to an elderly homeless man on a random everyday street; it seems to revel not in something it sees as sordid but in those hidden and ignored places and people. Returning to how real parts of the story are, it is very possible that certain events exist in reality – Mikura’s agent being hit by a van, for instance – but Mikura’s way of perceiving how or why they occur may be a construct of his fevered mind. 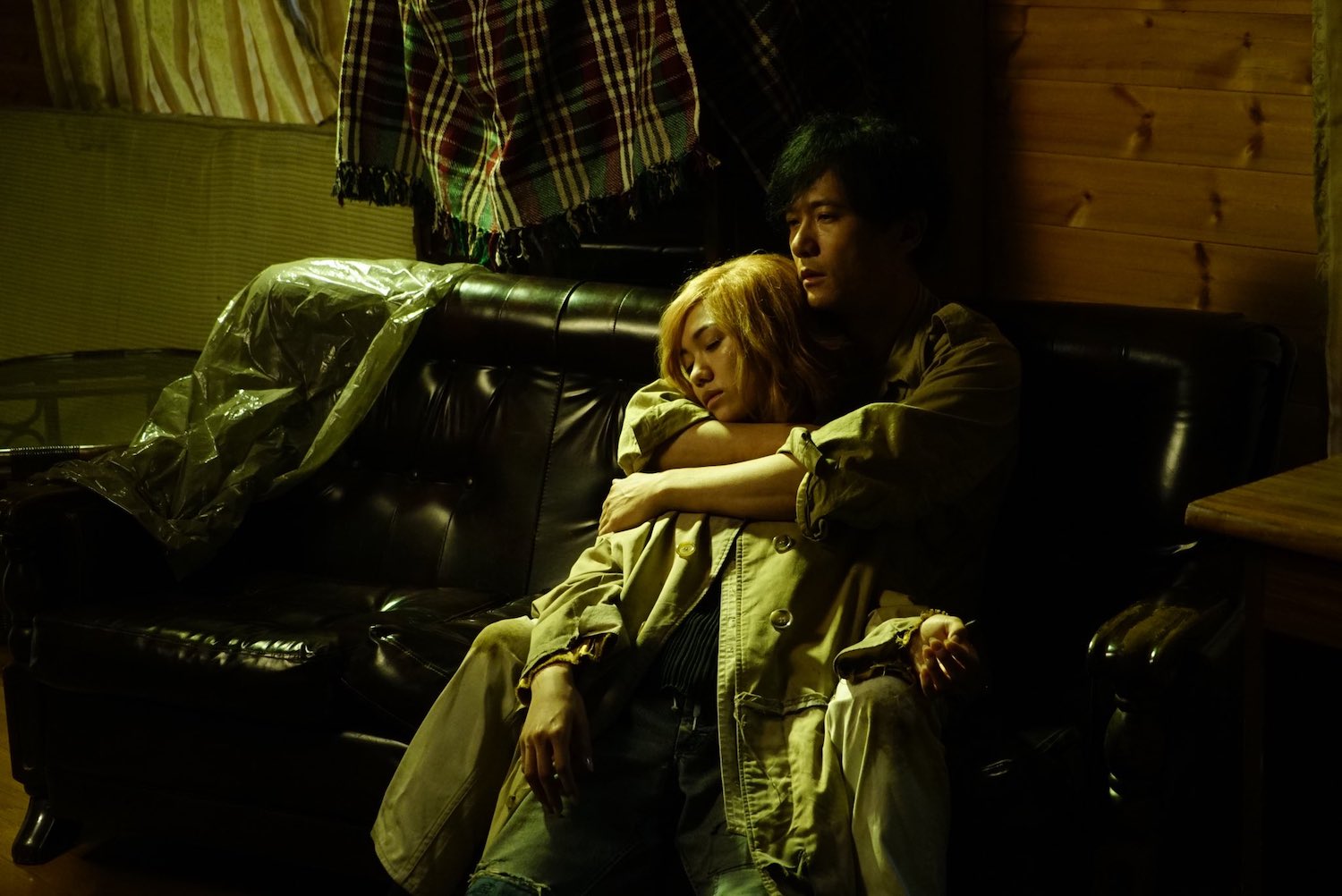 The not so happy couple

For what is considered to have come from a sexually charged manga, some might be hoping for great lasciviousness. Yes, there’s a reasonable amount of nudity (but not really that much) though there I think from the perspective of an erotic drama Tezuka’s Barbara falls short of more skilled work like Shinya Tsukamoto’s A Snake of June. I think it also lacks its depth. A Snake of June is, I think,  a complex, remarkably acted and beautifully shot film, and sadly if there is an issue with Tezka’s film it is that as a director he hasn’t the nous of the film’s cinematographer Christopher Doyle, or a director with the capacity for visceral directness and moral complexity as Tsukamoto. As a director Tezka has a good feel in general for mood often created by sound: the use of low frequency in the opening, that demands listening through good speakers (thank the heavens for the Tannoys connected to the TV) really create a sense of claustrophobia.  Elements of the early jazz soundtrack, especially the atonal squealing records played, serve to illustrate Mikura’s mental state. But otherwise Tezka just doesn’t have the chops and falls short on making the film feel intimate. Doyle being Doyle will give you a well shot film without question but Tezka hasn’t the directorial vision of some of Doyle’s other collaborators like Wong Kar Wai in his pomp. Some of the attempts to be more stylised seem lifted from Kubrick, too – so even Tezka’s best moments don’t feel like his own: the occult wedding feels influenced by the ceremonial orgy in Eyes Wide Shut; and the scene where they drive through the winding mountain roads as Mikura and Barbara flee her mother seems like a clear homage to the opening of The Shining, all that is missing is Wendy Carlos’ soundtrack. Even some of the scenes, used in the publicity shots, of Mikura and Barbara in a junkyard living room, feel right out of Sogo Ishii’s Burst City. Tezka lacks the ability to create an appropriate hypnotic intimacy, something that erotic fantasies of this type often need to have; unlike Laraz’s The Coming of Sin, or the aforementioned A Snake of June – or even some of the pink films released recently by Third Window.

So in many ways the film stands and falls on Tezka’s collaborators. Doyle is a given, and his photography will always look lovely, and stylistically the film tends to move between stark, brightly-lit reality and rich glowing images. The cast too, do a decent job all-round. Fumi Nikaido, a veteran of several of Sion Sono’s films (including Why Don’t You Play in Hell? Which I am still waiting for a release of…ahem… no pressure), is often excellent because in the very beginning Barbara is clearly meant to be over the top, and it threatens to be a tantrum of a performance until she transforms into her role as muse. Goro Inagaki as the trashy author most certainly suits the part of Mikura though I do think it’s the image of dyed haired Nikaido as Barbara that lingers the most in the memory. The sound design, that oft-forgotten aspect, really works to draw you in, just as the music can be very particular. The jazz Mikura listens to is the kind closest to musicians smashing their instruments with their fists to make sounds that borders on unlistenable. Like most films I tend to be picky, it’s in my nature, and I think a few minutes of cutting would have done the narrative no harm. No that the film outstays its welcome but towards the end I did feel it dragged its feet a little – forgetting the old screenwriting maxim of get in late and get out early. Then again, the narrative does fit together nicely like a puzzle as it ends.

If anything the film makes me want to seek out the manga to understand why it was considered unfilmable at the time the manga was released in the 70s. Yes, Japan censorship was stricter then but I didn’t find anything in the film to be any more wild or transgressive than many other Japanese films from the 70's. And from a modern perspective if you compare it to earlier films like A Snake of June or Guilty of Romance or Sono’s other far, far more explicit Anti-Porno, these are often far more disturbing and explicit works.

I did have some trepidation before watching the film, Tezuka’s Barbara is the kind of film I think that is easy to turn into a travesty of clichés because the story deals with a great deal of archetypes. Yet the resultant film is often at its best in its moments, the first lingering shots of Barbara drunk in the subway, the visit to tarot card reading mother, Mnemosyne. Moments of it capture the right mood well but it can be inconsistent, and Tezka cannot quite capture that dream like state so that it is calling out for one of the many other directors otherwise cited – nor the depth they are able to bring to a film, as Tezka’s Barbara has many virtues but it lacks emotional depth. The film, too, is never as transgressive or as shocking as it perhaps thinks it is. The fetish bar is nothing on the real life scenes in the gay S&M bar in William Friedkin’s Cruising (yes, the context is different but Cruising has a visceral realness; Tezka’s Barbara though cannot commit to the same extent - maybe because Friedkin is willing to be uncompromising; whereas Tezka hasn't that same ability to really push the envelope). I think perhaps Tezka needed to go a step beyond and maybe there’s a problem in that he’s adapting his father’s work and perhaps unwilling to take it all that bit further. The film opens declaring the film celebrates the 90s anniversary of his father’s birth and I think that says a lot about the film, and the film’s title: it is Tezka’s Barbara; it is not Tezuka’s Barbara.

That said watching Barbara batter the human-mannequin to bits to Mikura’s uncomprehending eyes is a bizarre hoot, and there really is a lot of moments to enjoy in the film, some of which are easy to overlook but it is ultimately a film of moments that is desperately in need of a director capable of creating a more consistently intimate package.