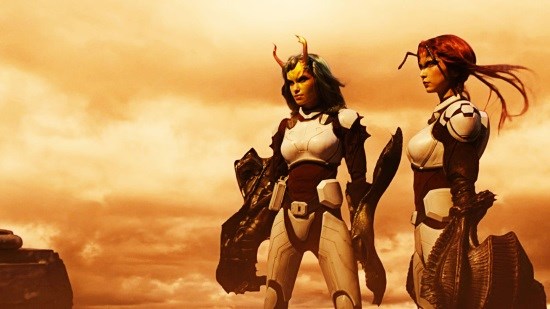 It’s often said that you can’t polish a turd, but as it turns out you just need to have the right person doing the polishing. In this case the polisher is one of the worlds most prolific film makers, Takeshi Miike and the turd in question is the bug-filled sci-fi Terraformars in this 2016 live action adaptation.

In 2599 a manned mission is sent to Mars consisting of a variety of convicts. Their mission – to inspect the newly terraformed planet and kill off the cockroaches that were part of the terraforming process. Little do they know that the rather off-kilter Professor Honda has neglected to tell them that the cockroaches have evolved significantly during the 500 year terraforming, becoming 8-foot humanoid killing machines. Luckily, he also hasn’t told them that he spliced the convicts genomes with those of a variety of insects granting them a number of superhuman abilities with which to fight back. They’re going to need them too because the bugs have no intention of letting them leave alive!

You may have noticed a bit of a lack of any character details in that synopsis and that’s because Terraformars doesn’t really care all that much about it’s characters, who are all essentially one-note ciphers with the majority getting killed off before they’ve spoken ten lines. Miike even made the decision to, thankfully, cut back on the long-winded backstories that ended up bulking out some much of the anime adaptations run time. There are a few bits here and there but even these could have hit the cutting room floor with little impact on the finished film. Instead the film allows Miike to do what he does best – big, over the top action with set-piece after set-piece making the most of what appears to have been a pretty considerable budget.

You know what? There's nothing wrong with that at all as seeing people transforming themselves into bizarre, Cronenburg-esque insect hybrids (like the Sam Raimi Spider-man, the film takes little notice of where certain insect bits should be positioned possibly to avoid having to have its cast spend the whole film trying to hit each other with their bums) and then fighting wave after wave of bad guys is pretty good fun!

It's all helped along by some pretty great production values. The prosthetics all look great and are certainly on par with many Hollywood productions. Additionally the set design is really great, especially in the few Earth scenes. Even the rather gormless-looking enemies are suitably threatening here. In fact the only time things really start to come to pieces is when full CGI characters are required – the film-makers clearly chose to spend the budget on the close-up effects instead and that more-or-less pays off here.

The main issue with the film is that it just doesn’t push far enough. The original manga is adult and full of nudity as well as extreme violence, and the anime adaptation is infamous for being one of the most heavily and poorly censored series ever made. The film however, despite being made by Takeshi ‘Ichi the Killer’ Miike, is really toothless and almost totally bloodless. It stinks rather heavily of studio interference to make sure their big-budget film is suitable for all the little kiddies to go see (something which Western films are all-too guilty of at present as well). It just makes the whole thing so tame and ultimately underwhelming and brings to mind the question of why they didn’t adapt something else (it’s not as if there aren’t plenty of action series that are much tamer). This toothlessness also means that the audience isn’t so engaged by the action that they overlook the issues with the films various big plot-holes, most of which would probably have been less noticeable otherwise.

All-in-all though Miike has done a really solid job here and Terraformars will provide you with both an entertaining couple of hours and a curious fixation on Preying Mantis girls (though maybe that’s just me...).

Terraformars is available to stream from the Arrow channel on Amazon Prime.

7
Starship Troopers this ain't but it's a great, bug-stomping time!