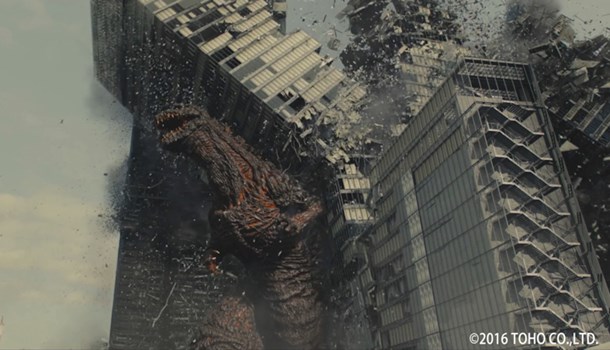 The King of All Monsters, the God Incarnate, Godzilla (and known in Japan as Gojira) is back. This time, it’s bureaucratic, impersonal and more radioactively destructive than ever before!

There are many of us with fond memories of the decades old Godzilla franchise. From the original film, which was released in 1954, to the most recent western versions in 1998 and 2014. The God come monster has taken many forms, from the man in a rubber suit (rest in peace Haruo Nakajima) back in the 50s and 60s, to the CGI monster of 1998 and 2014 and even a motion capture version in Shin Godzilla. Over the years Godzilla has evolved in many ways, in the monster’s previous forms, it was much smaller, probably less threatening and perhaps even heroic in the more recent western adaptations, though the lingering menace remained. In this newest reincarnation Godzilla starts out as a large lumbering amphibian, causing minor destruction and inconvenience to the denizens of Tokyo. Before evolving into a massive destructive force, resembling something like a radioactive T-rex with impenetrable armour, radioactive fins, a truly gigantic prehensile tail. Capable of shooting a proton beam and eyes that stare right into your soul. Yes, perhaps, this incarnation of Godzilla is the most destructive and threatening to date, putting the heroic 2014 version to shame, but is Shin Godzilla worthy of the Godzilla name?

It is perhaps worth having a look at some of the detail behind Shin Godzilla’s production team: A chap (whell known amongst the older anime fandom) by the name of Hideki Anno, co-directed the film and is responsible for much of the writing and cinematography within it. His influences can be felt everywhere, and why not, he has publically said that he always wanted to direct a film with the King of all Kaiju.

Let’s be honest, Hideki Anno isn’t exactly subtle with his writing, from the giant mecha and destructive angels of Neon Genesis Evangelion, to the robots of Gunbuster and the God Warriors of Nausicaa. Hideki Anno has relished in using gigantic subject matter to deliver his stories. References to his earlier works are present throughout this film, from the huge tank battles and military logistics scenes (Evangelion), to his choice of quirky camera angles and strong political cynicism. This film at times feels like its subject matter is less Godzilla, and more the personalities behind its production. However, this is not necessarily a bad thing, as Shin Godzilla delivers quite a lot of it's message, which I think makes Shin Godzilla rather unique compared to its predecessors.

Firstly, Godzilla is just a monster. There is no anthropomorphism, no humanity or real motive. Back in the 1954 production and in subsequent versions, Godzilla was used to deliver a message on how the atomic bomb was a terrible thing. Now, Godzilla is a product of decades of nuclear waste disposal and washout, and is more the product of human folly into what it can’t handle. Its choice to destroy Tokyo seems to be more out of convenience than a any deeper motive.

Unlike earlier films, Shin Godzilla makes a number of key decisions regarding the supporting characters. The USA are not the heroes, they are merely supporting actors who, at the end, are in fact trying to make things worse. Instead it is the EU who actually provide the real help, though in subtle ways. The film also uses some of the same tropes as the original 1954 film. Goro Miki is a scientist referenced multiple times and is the discoverer of the monster, but also the creator of a dangerous weapon. This is a reference to Dr Serizawa, who held the same beliefs, although Goro’s role is much maligned and toned down, it has some of the same impact.

Shin Godzilla draws heavily on Hideki Anno’s political beliefs and cynicism in the current and previous administrations. At least 50% of the film features members of the political class making decisions through long drawn-out briefings in corridors, meeting rooms with aides, and scenes where those in power are doing what they can to deflect responsibility. Though the film, politician’s titles get longer,. We repeatedly see that the established elderly politicians become almost powerless, enfeebled and paralysed by fear of risk, while their younger counterparts take risks and eventually save the day using the power of science and strong strategy. If this isn’t a negative nod to the current Abe administration, I don’t know what is.

Politics and setting aside, one of the highlights of Shin Godzilla is the soundtrack and the visual effects. The soundtrack, produced by Shirou Sagasu (Evangelion, Attack on Titan), sets the tone wonderfully, re-using elements from his own previous works right the way through the film. Anno also uses many elements of the 1954 soundtrack to accompany the action, mono sound be damned, just as he loves the music. The visual effects are also a throwback to the 1954 film, with the scene where trains are used to attack Godzilla’s feet in the 1954 version. This is repeated with Shinkansen and Yamanote line trains in the most ludicrously silly and wonderful action scenes.

While Shin Godzilla lacks the humanism, character development and strong plot of some of its predecessors, it makes up for in its raw violence, dynamism and action. While I was expecting more from some of the characters, and many of the faces are forgettable, Hideki Anno has spared no time in making sure all of the science fiction tropes are represented, from his super genius woman, to the bossy “Misato” type, working with the USA. There is something for everyone!

However, Shin Godzilla is clearly a fan work. It has been produced by a Godzilla fan, for Godzilla fans. It is heavily self-referencing to earlier films in the franchise, and perhaps wouldn’t stand well for those not familiar with previous works. I personally found myself grinning throughout the film, and inevitably playing a drinking game (see below). I have found it a refreshing change from the recent Godzilla films in 1998 and 2014, and I personally think that we are heading back to the “good old days” of kaiju films. I think that it is definitely worth a re-watch when Shin Godzilla comes to home video in the future.

This game was devised in the spur of the moment in the opening credits. Hideki Anno is a huge fan of self-referencing. Shin Godzilla takes huge influence from his previous work, especially Neon Genesis Evangelion, in both the setting, scenes, sounds and cinematography. From the tanks, to Godzilla’s proton beam, to the political decisions.

However, this is not a good thing for you:

Grab yourself a pint of something alcoholic.

For every Evangelion reference, take a sip.

The winner is the person who drinks the most.

If the Evangelion reference is wrong, the opponents need to drink two sips.

8
A great Godzilla film for Godzilla fans, but maybe not for everyone.