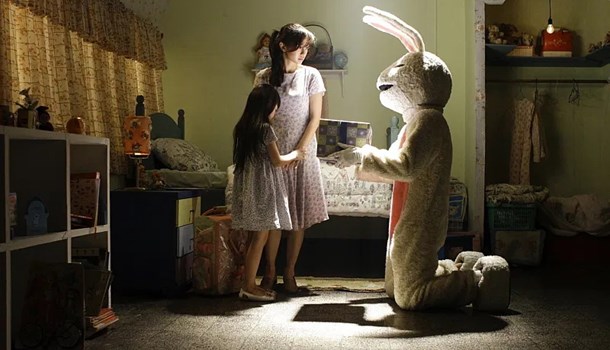 Rumours about a serial killer are rife, and the shy and unassuming young bartender Elang is plagued by terrifying dreams of a knife-wielding killer in a bloodstained rabbit costume. The local people are afraid, but Elang is worried too: he fears for the safety of his neighbour and her young daughter, but also because he is becoming paranoid that the police have deemed him to be the prime suspect.

In her short introduction at the beginning of this DVD edition of the movie, Indonesian director Upi Avianto states that Shackled (or Belenggu, as it is known domestically) is a departure from her previous work, and that she waited many years for the opportunity to bring it to the screen. I must admit that, as far as I know, Indonesia is one part of the world that has yet to acquire an international reputation for this type of film, but for all its flaws Shackled may be able to do something to address this.

The promotional material likens the dark, surreal atmospherics to those of David Lynch, and although it’s sometimes counter-productive to draw comparisons between a new film from a little-known director with one of the most high-profile ones, I think it’s justified at least as far as the visuals are concerned. I’m not familiar with Upi’s personal directing style but in this film she’s achieved a wonderful aesthetic filled with paranoia and foreboding, with cinematography that’s dark and moody without being excessively indistinct or murky.

The storyline itself is also quite inventive in some ways, being as it is littered with periodic twists and jumps backwards and forwards in time to keep viewers on their toes. Again, there’s a fair bit of apparent Lynch influence here, with dream-like set pieces and some decidedly odd supporting characters; the screenplay also seems to draw its inspiration from as far back as Hitchcock and film noir with the suspicious neighbour and the appearance of an alluring femme fatale.

These aspects are not a problem in and of themselves given how psychological crime thrillers often contain many staple tropes and conventions, but it does give the movie a formulaic feel. The relatively slow pacing works well to whip up the atmosphere, but when the story relies on an unreliable narrator with the very overt suggestion that nothing as it seems in the first few minutes, the story is placing itself in a race with the viewers from the outset to stay one step ahead... and on more than one occasion it loses that race, and the element of surprise is lost as a result.

A few edits to the script would make Shackled a smoother and more unpredictable experience, but it’s far from the worst of its type that I’ve seen. The performances aren’t too bad either: Abimana Aryasatya looks a little lost on occasion but his role is a demanding one, and Imelda Therinne delivers the vulnerability and moral ambiguity that her character requires. The recurring theme throughout the production is that of being ‘competent’ as opposed to ‘outstanding’ or ‘groundbreaking’, but I suspect that this was Upi’s intention.

Even after watching the film from start to finish then mulling over the events that unfolded afterwards, I still feel inclined to give it a repeat viewing at some point in the future; not because the storytelling was clumsy and ineffective, but because the intentional moments of misdirection prompt you to look at various moments from a different angle and rethink how the characters are connected to one another. I think this is a positive indicator of the quality of the writing, and the ‘watchability’ for want of a better term.

I feel this in spite of the pedestrian pacing and occasionally unconvincing characterisation, because for the most part my admiration for Shackled just about outweighed my frustration and moments where I found myself thinking, “yep... I saw that coming.” When the film industry landscape is so crowded with similar fare it was, I think, a wise decision to stick to the formula and focus on the execution instead.

7
Overlong and tied to genre conventions it may be, but Shackled makes a respectable effort and does so with technical aplomb.
LATEST REVIEWS