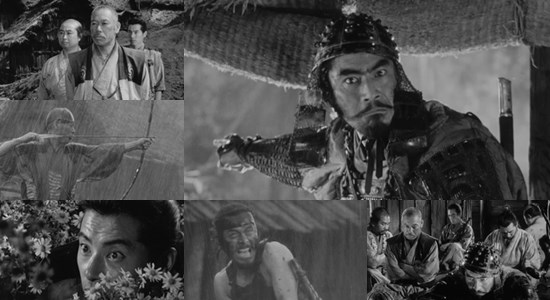 Seven Samurai is the one foreign film that almost everyone has seen and even if they haven’t actually seen it, everyone mysteriously seems to know pretty much exactly what it’s about thanks to some kind of cultural osmosis. When Kurosawa made Seven Samurai in the early 1950s he was still riding high on the success of Rashomon, which had finally prised the West’s eyes open to the wonder of Japanese cinema, which is perhaps why he was allowed to make a three and a half hour period epic shot almost entirely on location, with a budget and shooting schedule that constantly threatened to spiral out of control. The gamble paid off though, as the film proved massively popular with domestic audiences despite its extreme length and even developed a following overseas, albeit often in a truncated version. Today, Seven Samurai is Kurosawa’s most famous film as well as his most widely seen and has gone on to have a profound impact on filmmaking as a whole. Now with this new High Definition Blu-ray release from the BFI, British viewers finally have the opportunity to revisit this classic of post-war Japanese cinema with even sharper eyes.

Seven Samurai takes place in Japan’s warring states period, when the country tore itself apart as a hundred petty warlords vied for personal power. Great old houses fell while others rose, but as each lord fell his vessels were left by the wayside, ill-equipped for an independent life. Meanwhile, the lords weren’t there to keep order on their estatesm and those that were often cruelly exploited their tenants beyond their means. Threatened both by their supposed protectors and roving bandits, one small village who had been squeezed from both ends almost to the brink of starvation strike on the idea of employing samurai to defend themselves. Though they’ve only rice to offer, they nevertheless manage to find seven good men who are willing to help - some out of compassion, others out of boredom or a desire to learn, but whatever their original motivation this particular mission will have a profound impact on all concerned.

Seven Samurai is an epic in every sense of the word. Roughly three and a half hours long, the film is in fact split into two parts, with an included intermission of a black screen and overlaid score that neatly divides the narrative into two halves (although this new edition allows you to play the film with or without it). Despite its extreme running time, the power of the story and Kurosawa’s steady hand ensure that it never particularly feels like a long film. Though it’s obviously packed with fantastic action sequences, it also leaves ample room for character development and social commentary.

The fact of the matter is that the samurai are simply the lesser of two evils at the present time. The peasants don’t necessarily trust their new-found benefactors either, but the bandit threat is so extreme they’re willing to lie down with a few wolves to keep the foxes at bay. The samurai they do find all turn out to be good men and true, willing to risk their lives for a regular handful of white rice. Kanbei, the leader of the group is the archetypal good samurai. When we first meet him he’s taken the extreme step of cutting off his topknot to impersonate a priest in the hopes of rescuing an infant child who’s been taken hostage by a bandit. Though originally reluctant to help the peasants as he’s had his fill of fighting, he’s moved to pity when he finds out they’ve been offering him their last good food whilst subsisting on a diet of millet. Bandits and samurai aren’t so different from the point of view of a peasant, but for men like Kanbei what’s important isn’t his topknot or his social status but his adherence to his values and a common sense of human decency. The age of that sort of samurai has passed though - by the end of the film it’s the peasants who’ve regained their natural peace; everything’s back to normal for them as they joyfully plant the rice crops for the coming year, but the samurai are once again displaced.  Now that their mission is over they’re masterless once again and must wander on looking for the next outstretched hand offering hot white rice in return for salvation.

Now, a note on the transfer for this release - to be frank, it has to be said that the new High Definition presentation included on this Blu-Ray Disc is a little disappointing, particularly when compared to the US Criterion edition from 2010. Although the booklet notes imply a more recent master may have been employed in the production of this newer edition, Criterion’s does in fact appear a little more modern and holds up better despite being taken from an older 2K scan. It isn’t a disaster, but occasionally looks more like an excellent DVD than a just released Blu-Ray, and there’s a depressing smoothness to the image which lacks the feel of real film grain. Given that this title has been delayed for around three years it’s unfortunate that it doesn’t quite live up to expectations, but still it’s a massive upgrade over the original BFI DVD release, and finally having Seven Samurai available in HD in the UK is certainly no bad thing.

Seven Samurai is classic that every cinema fan should see at least once and its impact on film history cannot be over-estimated. This presentation might not quite live up to the film itself, but can’t quite hamper its immense scale and humanity. Epic, entertaining and finally moving, Seven Samurai is essential viewing.

Extras consist of an original Japanese theatrical trailer; The Art of Kurosawa - 49 minute visual essay from Japanese film scholar Tony Rayns recorded in 2013; 16 page booklet featuring three essays from critic and academic Philip Kemp - one on the film, a profile of Kurosawa and a profile on Mifune plus original Film Bulletin review from 1955 by Gavin Lambert.

8
A classic masterpiece that is completely worthy of its legendary status, but is slightly let down by a disappointing transfer.
LATEST REVIEWS