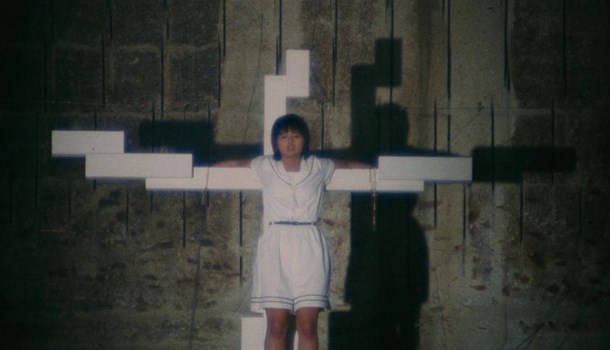 The Boss is Dead! Long live the Boss!

The Medaka group boss is dead. His heir named. Only they’re also dead so it’s up to the last family member, schoolgirl, Izumi (Hiroko Yakushimaru), to take the mantle of Boss.

Sailor Suit and Machine Gun (1981) is not what I was expecting. If anything, I think I expected more guts, guns, violence, bloodshed and, well, exploitation, instead I got quite an unusual, perhaps remarkable film. And a genuinely very good film. The first film by director, Shinji Somai to be released in the West and with a cult reputation, there’s always the risk that the film hasn’t been released for a good reason: it’s not actually that good, or it’s interesting because of [insert reason while still not being that good a film], so as I tend to do with such films, I entered the world of Sailor Suit and Machine Gun with considerable trepidation and quietly tempered hope; but from the opening scenes: gently comedic, pleasingly absurdist and with more than a dash of genuine feeling, the tone was set and it’s a tone that resonated well with me as much for what it wasn’t. From the beautiful reveal that the dying Medaka boss’ doctor is, well, unsuitable, it could immediately have gone for full-on slapstick buffoonery (I can only swallow slapstick in the most modest of moderations), instead it balances all the elements on film and this tight-rope walking of tone really follows through into the resultant cinematic treat that is Sailor Suit and Machine Gun.

Before going further, it’s worth noting that the Arrow disc has two cuts of the film; the original 110-minute theatrical cut and a 130-minute extended cut. I took the plunge with the extended cut and I am so glad I did.

Right, back to tone. Key to me is how the film treats Izumi, after all she is a naïve teenager. She’s no worldly-wise individual even if she knows her own mind. And the story recognises these various facets of her personality and plays to them. Yes, she accepts the mantle of boss but does so for narratively plausible reasons. Once  the boss, she acts as the boss, often naively and impulsively as a teenager, ignorant of the consequences: she cannot fully recognise her position, even if her Yakuza underlings do. It’s a really fine line and the film treads it so Izumi's story often feels like yakuza magical realism; that really matters because it allows suspension of disbelief, as the only other way to go would have been all out ludicrous bloodshed and the film clearly is not interested in taking that path. If anything, there is very little violence, though the film does pepper the story with physical and sexual threat and assault, but again always within boundaries that the film places around the narrative; again, it reinforces the sense of teen-girl yakuza magical realism that becomes so curiously attractive even if on paper seems so unlikely to succeed.

This is also reflected in how Izumi’s very ragtag band of yakuza - and it really is ragtag, just the four of them, entirely on the skids - treat her. She is respected as the boss but also recognised to be a teenager, almost a child in their eyes, and so their behaviour is a blend of traditional respect but also careful thoughtfulness for what she is. It’s another tightrope, like the story, where the characterisation and their relationships feel pitch perfect in the context of the film. Even down to how the yakuza deck out their office to suit their new, younger teen-girl boss. Equally, the villains can be pretty vile, they are not (always) comic book affairs and make sense within the world that Somai creates. I often think of each act of fiction: novels, films, etc. as having their own inner verisimilitude, own inner logic and often these can be pretty strange realities, and Somai’s own narrative verisimilitude in Sailor Suit and Machine Gun works and it’s a curious thing, because on paper it feels like a mess where on screen it’s anything other than. Seeing the yakuza office become this curious chintzy affair, feminised (to arguably questionable and dated taste) never feels silly, it feels respectful and right in the context of the film. It’s naturally unnatural. 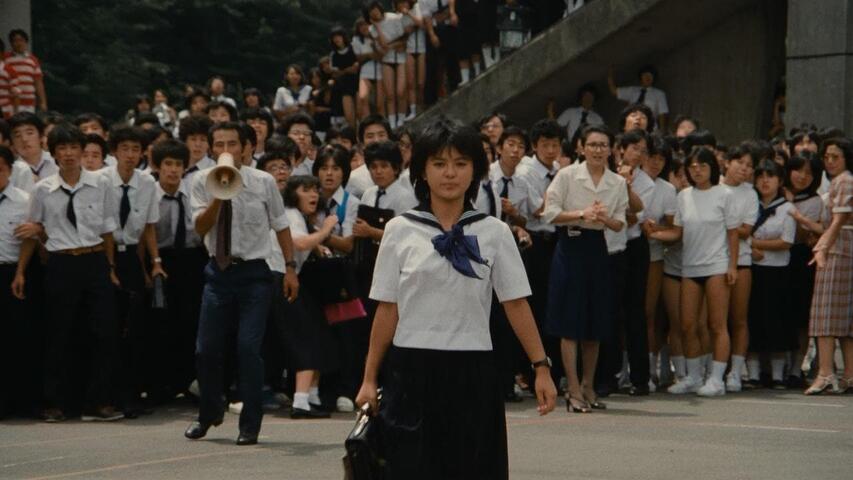 Stepping out of school into a new life

Yet Izumi is still a teen and it’s noticeable how her main relationships, with three male school friends who soon disappear from the narrative, and her yakuza brethren is mainly staked upon two older characters: Sakuma and Mayumi. Sakuma, is the one true yakuza under Izumi’s command, becoming something of a surrogate father figure for her, and many of the character dynamics really fall between the two; and Mayumi, the mysterious would-be girlfriend of Izumi’s dead father who may not be quite what she seems. We see more of the reality of yakuza and criminal life through the decisions and actions of Sakuma and Mayumi – as well as Izumi’s three remaining soldiers: Mei, Hiko and Masa – so the film never shies away from the reality of what it means to be a yakuza or live in their sphere, but as characters they mitigate some of the worst of it from Izumi, allowing her to keep enough innocence and honesty at the same time as embracing – often naively – being the Medaka boss. That said, for all the characterisation and character dynamics, Izumi simply becoming a boss is hardly in and of itself a story and an additional plot device is thrown in to really push the film forward, driving the film towards its acts of yakuza conflict and I’ll leave that for you to discover. (Yes you will watch this film, Richard repeats as he twiddles shiny objects in front of your eyes to hypnotise you into obedience, where you order the film immediately).

All this is then directed with real skill by Shinji Somai. I became aware how he frequently shoots the film in either a very formalised style, the shots carefully composed and still, or else allowing the camera to softly pan across or around the characters and then often from a distance and slightly obscured, whether by architectural or elements or nature. The effect of both creates a feeling which in the more formally structured shots seem to reflect the structure of yakuza culture, and where the camera pans a feeling of witnessing intimate, personal moments. Some of these personal moments I suspect are only in the extended cut, and allow glimpses of innocence in characters who otherwise may feel mired in their questionable personal history, such as Mayumi on the swing, in the rain, perhaps finding moments of a childhood she never had. The sound too is often curiously heightened or artificial, not unlike Seijun Suzuki at his more unusual, and where some viewers might find this off-putting it's always a plus in my view. It also works in the context of the unreal reality of the film world created.

I’m on the fence with the quality of Hiroko Yakushimaru’s performance as Izumi. Arguably, it is not a great performance per se, but an example of a very fitting one in the context of the film. She has a teenager's energy about her, often moving about the set or else has a wannabe adult stillness about her but importantly she is believable as the teen-girl boss; when she commands her men to do something it never feels silly; maybe it’s that she never overdoes the part at all; returning to how the beginning of the film could have bubbled into excessive comedy, equally, Yakushimaru finds the right balance of innocence and resolve so that we believe her if she storms alone into another boss’s office, or when she seems just a normal uncertain teenager trapped in weird shit danger. (She gives a great performance on the theme song, I have to say.) I think part of why her performance works, even if it's not a classical performance, is that the film is given proper yakuza credence by Tsunehiko Watase (a veteran of the Battles Without Honour and Humanity films) as Sakuma. As the respectful, experienced yakuza, capable of violence and who also cares for Izumi, he balances out her innocence so together they really do make quite the pair on-screen, and you feel these characters really matter to each other; it’s not just chance meetings but real affection, real yakuza love. (There’s even a moment when you wonder if it might turn into a romance.) Yuki Kazamatsuri’s Mayumi rounds it out and she feels right as the woman you are never quite sure is honest or not, good or bad, probably because she has been all things and will be again (intriguingly looking her up, she seems a veteran of pink films though don’t expect any flesh here).

On paper Sailor Suit and Machine Gun sounds like another so-so film, neither a classic nor a disaster but I was very, very taken with its balance of innocence and undercurrents of real threat; surprisingly well directed and somehow ridiculously charming and compelling, I for one am very glad Arrow was able to make the release. Yes, the film has a few issues: the ending seems to have some story elements cut out that reminds you of Enter The Dragon in those releases where the nunchuck scenes were removed and the story suddenly skips forward, but that is not the fault of the release and you suspect the studio is guilty. I may have been expecting exploitation but I got so much more. I think some people will not be as big a fan as I, because it’s hard to pin down how the film manages to do so much right. Then again, to keep the attention for over two hours and make you care about a teenage girl as a yakuza boss, while allowing you to suspend your disbelief, takes some doing, especially if you are not going to go the all out ludicrous violence route when suspension of disbelief is naturally left at the door. I suspect much of this goes to Somai’s direction in maintaining a consistent film world and the finely nuanced tone in Sailor Suit and Machine Gun.

The Boss is Dead! Long live the Boss!