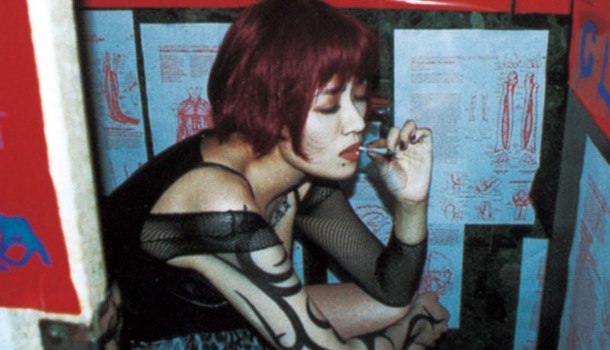 The original Toshiaki Toyoda early years boxset passed me by, likely in one of those times when I was feeling cinematically apathetic. Third Window’s second set of his films sits awaiting watching but it seemed right to start Toshiaki Toyoda's directorial oeuvre at the beginning, with his debut indie feature, Pornostar, now released as a standalone blu-ray.

Loner, Arano (Chihara Junia), arrives in Tokyo, bag in hand, bloodymindedly walking into who-cares-what, and into Kamijo (Onimaru), a club owner on the fringes of the Yakuza. The boss who would bring Kamijo and his gang into the Yakuza wants Kamijo to kill his rival, Matsunaga; Kamijo has other ideas, recognising Arano’s proclivity for violence, and brings him into the fold.

What should be immediately apparent is the film’s title does not describe the film; alternatively, it’s been released as Tokyo Rampage, a title that is arguably even less purposeful. On the surface Tokyo Rampage seems more reasonable, considering Arano stabs numerous people throughout the film (mainly yakuza) but Tokyo Rampage is suggestive of a more mindless action film. While Pornostar can be violent, and the violence is unpleasant, it’s never handled unpleasantly, never gratuitously, or gives you a sense that the film enjoys what it shows you. Rather, Arano is a loner, a stranger in town and a character about whom we learn almost nothing. This is something that almost never changes as the film unfolds, except that he vocalises that the yakuza are something for which he, and/or the world, have no need. It’s a curious thing, because Arano’s refrain to the yakuza that they are not needed could be lazy writing, instead the fact that we know nothing about him is fitting in the context of the film, and the statement gives his character enough impetus to allow it to work and for us to picture in our heads what has driven Arano to this point.
It helps that Chihara Junia’s impassive performance has a quiet sense of bubbling violence. Arano feels very much like a Clint Eastwood "man with no name" and in fact in the film, watching with subtitles anyway, he is never given a name; again, this is very fitting as a not quite an angel of vengeance wreaking havoc on various yakuza goons.

Yet the film is so much more than this, instead apparently a meditation on youth without a purpose. As the film lays itself before us, we start to see how the innocent and victims are often quite the opposite. No one seems to have a purpose except to get ahead in some way shape or form at the expense of others, whether this is Kamijo’s girlfriend - happy to rip off stolen drugs - or teenage skaters who are not what they initially seem, or Kamijo, apparently befriending Arano (as best as anyone could hope to), as an act of exploitation in the hope that Kamijo himself can evade becoming linked at the hip with the yakuza.

For all that the film may sound depressing, what comes across is what was Toyoda’s raw promise. As soon as that the film begins, it has a sense of identity. From the first shot of Arano’s dirty baseball shoes on the subway to his heedless thumping into strangers, contrasted with Kamijo's similar but more overly violent intimidation, Pornostar makes you realise that here is a director that has something... that something that is often so difficult to define but screams that the director has a unique sense of identity, vision and purpose.

Pornostar provides the viewer with a visceral, muscular piece of filmmaking; not in the sense of machismo but a willingness to delve into an uncompromising world and be uncompromising in how it is illustrated. It's a fine line, one which shows Toyoda’s nascent talent because Pornostar could easily have felt like a grubby, nasty piece of pointlessly violent filmmaking; instead, it lays bare a story of disaffected youth that has raw potency, and perhaps better for the director not quite being the finished article as the rough-around-the-edges nature of the filmmaking works in its favour. Another element in its favour is how the film is appropriately set in many of the grimier, faded backstreets, as likely to be filled with birds flocking to rotting scraps of rubbish than the more glistening shopfronts of Tokyo.

It’s not a film that necessarily has any answers for the social questions it raises but it doesn’t need to, and left me wanting to further explore Toyoda’s work. 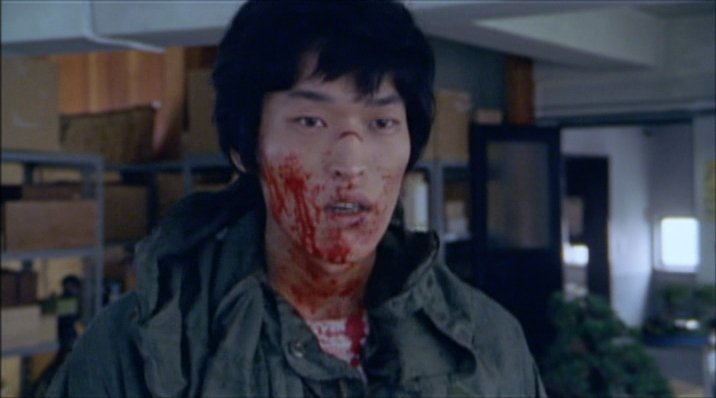