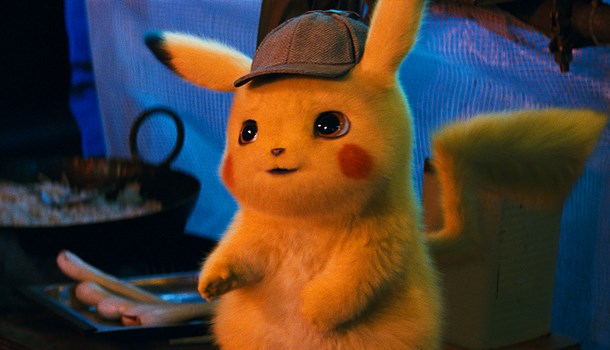 Whenever they announce a film adaptation of a video game the initial response always seems to be a rather pessimistic one, which unfortunately is fuelled by a long history of great games having terrible on screen counterparts. When the initial detective pikachu trailer first dropped I remembered myself being rather cynical at the time; however things changed when more trailers, speak peaks and behind the scene footage was shown to promote the movie. The one that convinced me to give the movie a proper chance was a video of the pokemon designs with their test footage along with an article that was published talking about how long the film crew spent studying animal behaviour and liaising with Nintendo/The Pokemon Company to get the look and behaviour of the pokemon in the movie right in order to make it feel more like a real world where they could co-exist with real people. So with all this in mind I got rather excited for the film but was cautiously optimistic. I went in hoping for a good film at the least.

I'm happy to say that I left the cinema rather happy and impressed with what I saw. I'll get this out of the way now. Detective Pikachu is a good movie, It's a good Pokemon movie and it is a great video game adaptation. Regarding the movie itself. The film is loosely based on the Detective Pikachu 3DS game that came out a few years ago. The film has the same premise; featuring a coffee addicted Talking Pikachu who teams up with a human to find said human's missing father in a world where humans and pokemon coexist while also uncovering a shady plot revolving around an illegal Drug called “R” which causes pokemon to become frenzied and incredibly violent if they come into contact with it. The film takes this premise and runs with it presenting the film as buddy cop film paying homage to Who framed Roger Rabbit with it's whole notion of having a regular human team up with a non human. In this case a talking Pikachu that only the protagonist Tim Goodman can understand, instead of a cartoon rabbit.

The film itself uses this concept to deliver quite a few fun jokes and conversations between Tim and Pikachu with onlookers in the world looking confused at what is going on between the two. The film also makes great use of the extensive pokemon catalogue of creatures to pick and choose a wide variety in order to flesh out the world and makes it feel like the film actually takes place in the pokemon world. From small things like Pidgeys, and their various evolutions flying over fields in a flock formation reminiscent of how real life birds would fly and migrate to herds of bulbasaur gathering in the fields outside the city, and even Pokemon acting in ways that are call backs and references to the anime and lore of the game. A fun example is a Jigglypuff singing in the corner of a bar and getting mad when everyone around it has fallen asleep during its song. For those who grew up playing Pokemon or watched the anime, there are a lot of call backs and references in dialogue, background sight gags and even music throughout the film. For those unfamiliar with Pokemon the film does quite a few clever things to keep these audience members entertained.

The most obvious one we need to talk about is Ryan Reynolds as the voice of Detective Pikachu. Who is having a lot of fun voicing the character. He is snarky, witty and constantly joking throughout the film providing much of the comedy between himself and Tim. This gives the film a light and fun tone. With this in mind when the film tugs on the heartstrings and goes for more dramatic moments at times which works well with the contrast between Pikachu's former joking demeanour and a sombre more reflective one to deliver some rather nice moments. As well as this every pokemon that appear on screen are distinctive enough that the viewer will understand what kind of animal they are. The ones that become more central and crucial to the story get more of an explanation with Pikachu commenting on a Psyduck being a terrible pokemon to be around as they can kill people with their minds when stressed. With regards to knowing about the pokemon we only really get the gist of what they are in the film. Looks, behaviour and types etc. We don't go full on detail with what attacks they have or go into full on pokemon battles. There are a few battles here and there but they are rather sparse throughout and do go as in depth as you'd expect to see in the games or any of the anime.

I believe this is a good thing. Pokemon battles and a film that is predominantly about them would alienate the audience. When it gets to battles in pokemon you have to know about type match ups, attacks and other things. From an audience perspective that is unfamiliar with pokemon and their types; a few of the battles in the movie can be boiled down to little mouse fights a fire dragon and ninja frogs chase a mouse and duck. It's really all you need to know in the context of this film Which in turn is why Detective Pikachu as a pokemon live action film works and why one based off say Pokemon Red/Blue wouldn't. Lets say they did make a pokemon movie and only used the generation 1 pokemon and did the story based entirely on pokemon battles with the 151 pokemon from the first game. That's a lot for people unfamiliar with the franchise to take in. The pokemon are also divided in 18 types with a combination of the two. So knowing which pokemon is which and their type is essential viewing. Which is why the anime movies as based off the TV series and games, and are made for fans. The fans will have watch the show, played the games and will have this knowledge. A live action movie that is it's own standalong entry cannot guarantee that the audience seeing it will have invested any time out-with this film to learn things so needs to accommodate the audience. Thankfully detective Pikachu does. It does so by treating the pokemon as actual animals, giving us just enough info to get by but little nods and winks for the ones familiar with the franchise to pick up on.

So all in all. Detective Pikachu is a really fun film. That takes the mixing CGI characters with live action characters in a great direction with giving the characters great designs that feel real. Combining them with behaviours and looks that integrate them really well into the world whilst also still capturing their charm from the source material. Its a simple buddy cop style film but has so much charm and personality that it somehow manages to combine all its little details into one great package. Possibly one of the best video game movies ever made. Visually impressive and a lot of fun.

8
Great Fun whether you're a fan of Pokemon or not. A fantastic video game movie