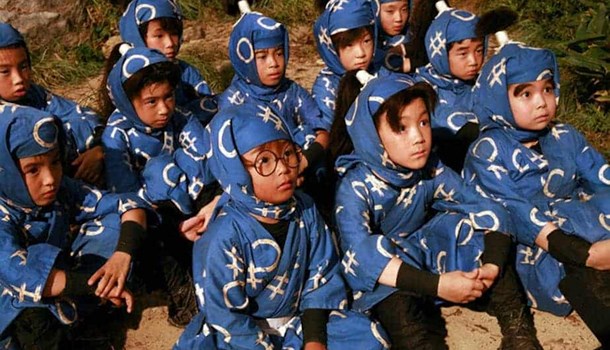 Takashi Miike - is there anything he won’t do? Recently we’ve seen him attempt a violent musical love story, a live action version of a kid’s TV show aimed squarely at adults and a humorous attempt at courtroom drama based on a famous video game. It should come as no surprise then then that this 2011 film is another foray into children’s cinema, this time with another adaptation of a popular children’s anime series/manga Nintama Rantaro - retitled Ninja Kids!!! for the English speaking market.

Little Rantaro is a slightly weedy, bespectacled boy from a respectable ninja family who have nevertheless not produced a top ninja for quite some time. Rantaro is about to set off for the ninja academy hoping to restore his family name to elite ranks of ninjadom once again. Unfortunately though, Rantaro and his classmates are far from the finest recruits the school have ever seen - so unimpressive are they that the teachers have nicknamed their class ‘ha’ because it makes them sigh. Whilst struggling with the basic ninja skills like booby trapping, mountain climbing and skill with shuriken, Ranatro and co find themselves the last line of defence between some poor defenceless ninja hairdressers (!) and an evil group of rival ninjas lead by a man whose head is so big that he often topples over because of it.

Yes, all things considered it sounds like a Takashi Miike movie. Just as he did with Yatterman, Miike has embraced the totally anarchic absurdity of the manga’s cartoonish world complete with garish colours and cutesy set design, only obviously without the more risqué aspects he added to that film - in place of which he’s found copious opportunities for more kid friendly toilet humour and crudity. Once again it’s the sort of film where it’s possible to get blown up, cut to shreds by badly aimed shuriken or completely destroyed by a fellow ninja only to magically get right back up again with a bright red bump attached to your head resembling nothing so much as a swollen, over ripe strawberry.

The beginning of the film represents its manga roots more strongly, being a serious of humorous episodes that happen around the boys at the ninja school as they attempt to master all the skills of the ninja. This section might feel a bit slow to get going because it has less holding it together but it does introduce several important gags for later use such as the recurring extramural ninja master who often bursts through the rear of the screen to explain something important about ninja history or doctrine (the hole then having to be repaired by bemused ninja instructors). The main narrative kicks in half-way through and the pace picks up considerably from this point on as the boys find themselves at the forefront of the battle for ninja honour.

There’s no denying that Ninja Kids!!! is an extremely silly film. It’s very definitely aimed squarely at children with very few concessions to the older members of the audience, but at the same time it’s never patronising or feels as if it’s underestimating the intelligence of its young viewers. It’s also got a slightly unusual message about teamwork and backup plans and that getting the job done is more important than who actually does it. Having said that, the little ninja are extremely cute and there’s something so innately absurd about the entire setup that you’d have to work very hard to not be at least mildly amused.

Ninja Kids is obviously not Miike’s most sophisticated film, nor is it his most accomplished film but it might be among his most entertaining films assuming that its family friendly antics are to your taste. Another dose of freakishly absurd fun as only Miike can deliver it, only this time even the littlest ninja acolytes can join in the fun!

Ninja Kids!!! screened at the ICA in London and Sheffield's Workstation as part of the Japan Foundation's Touring Film Programme for 2013. Following these two locations it will travel to:

8
A slice of completely surreal nonsense as only Miike can deliver, but this time even the littlest ninja can come along.
LATEST REVIEWS