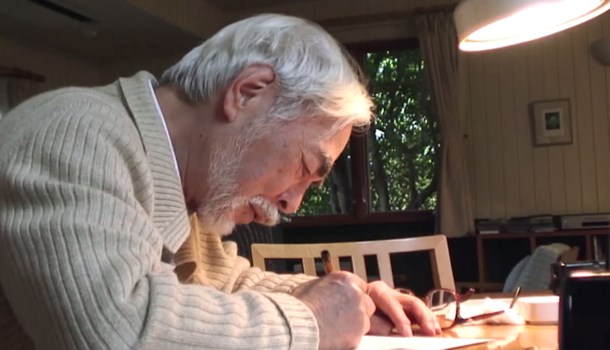 Never-Ending Man follows Hayao Miyazaki, the acclaimed animation director and one of the founders of Studio Ghibli. Retiring in 2013 only to return in 2016, the film focuses on his struggles to adapt to retired life and how he tried to reinvigorate his creative spark by directing a computer generated short animation.

The film itself is a rather sombre and reflective one. The main focus is not to praise Miyazaki as the almighty godfather of animation but rather to show him as an ageing man, coming to terms with mortality and the effects the ravages of time have taken on his passion for work.

The film is divided into chapters that chronicle a three year period; adjusting to retired life, grappling with a new art medium of which he has no prior knowledge and, eventually, settling on returning to work as a feature length animation director.

In terms of style, the film is a fly-on-the-wall affair, wherein a single camera follows Miyazki and the various people he interacts with. The film captures conversations between Miyazaki and other anime industry professionals, as well as others speaking about Miyazaki to camera. This is interspersed with archive footage from older documentaries from the Director's time at the studio.

The film has a very raw and personal feel to it - here we see Miyazaki as a person, not glorifying him or idolising him as other documentaries or biopics tend to do with their subjects. This leads the way into rather sombre moments; most notably the sudden announcements that one of Miyazaki's former colleagues has passed away. This in turn leads to Miyazaki's reflection on life and regret at not doing more, coupled with the sad realisation that he is now indeed an old man and that his carefree youthful days are truly behind him.

This phrase - “it can't be helped” becomes something of a mantra for Miyazaki throughout the film, uttered when things go bad or certain aspects of old age set in and our subject understands that there's nothing to be done. As a way to break out of this mentality Miyazaki decides to keep himself busy by diving into CG animation and create a short feature, and it's this process that takes up the majority of the film. We see Miyazaki's flitting moods between being impressed by the medium of CG to being outright disgusted by it. There are times when he sees that CGI can do things traditional animation can't but doesn't like how shallow/hollow it feels compared to the craft he himself helped to perfect, in particular the inability of CG to capture true lifelike movement.

Included on the disc is the original film and an “English Narrated” version. This version re-edits the film and includes American English voice over. Unfortunately, this cut completely changes the tone, making topics appear more upbeat by including jaunty music. The narrator talks to the audience like a primary school teacher would a child and feels rather condescending. Compared to the original version, this is borderline unwatchable. So much so, I could only handle 5-10 minutes of it before I turned off this version in frustration.

From all this, Never-Ending man doesn't have quite the same charm that a film like The Kingdom of Dreams and Madness” has. Those looking for something that gushes over Miyazaki or gives more insight into anime production may feel a bit disappointed. For those curious about Miyazaki as a man and not an industry figure, especially during the period  of his life just after The Wind Rises was released, this film provides a fascinating and genuine look at a man who, in his own words, would rather die doing something than die doing nothing.

7
A raw and sombre look at Miyazaki's life post retirement