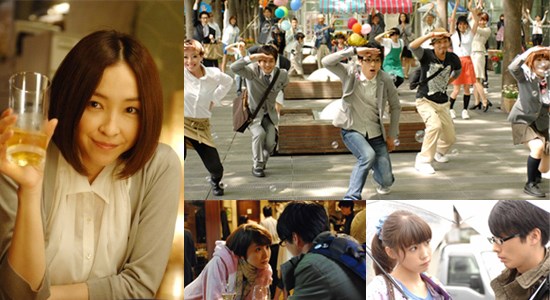 "Moteki" is a uniquely Japanese idea that there is a specific and very limited period of time where one becomes completely irresistible to the opposite sex. Naturally, this period comes at different times to different people in different ways, perhaps more than once or even not all. In the J-Drama TV series Moteki, struggling would-be reporter Yukiyo suddenly experienced this phenomenon as several women from his past contacted him out of blue and the possibility of these relationships becoming more than just ‘friendly’ became an unexpected reality. Now a year after the end of the drama series (which was based on Mitsuro Kubo’s manga of the same name) we rejoin Yukiyo in his quest for... what exactly?

A year after his first period of Moteki, Yukiyo (Mirai Moriyama) is now finally working as a entertainment reporter for a web-based magazine. Very much the office junior, he’s given most of the jobs no else really wanted and is constantly mocked by his boss and colleagues as an eternal virgin - a fact which he denies,  although he admits he’s been going through a bit of a dry spell. He’s addicted to Twitter, where he posts every mundane incident in his life even though he has almost no followers and has never received any replies. That is until one fateful day where he posts about being fed up and enjoying some music when, at long last, someone actually responds! A conversation builds and the two decide to meet. Assuming from the avatar that his new friend is another guy, Yukiyo is completely overwhelmed when a pretty young girl shows up instead. Miyuki is a bubbly young music fan who also works for a magazine and is just very happy to meet another music nut! Yukiyo is smitten, but it turns out Miyuki already has a very good-looking and successful boyfriend and insists on bringing a friend to their subsequent meeting. Is she really interested or just being friendly? Can Yukiyo really find true love this time (and is that really what he’s been looking for)?

The first thing to say is that Moteki is a continuation of a TV drama and, although a brief recap is given at the beginning of the film, existing fans who are familiar with the action so far will undoubtedly get the most out of it. That said, it’s in no way impenetrable and in fact the film is a fairly stand-alone affair with only one of the prospective women reprising a role from the TV series. The TV series ended on a fairly ambiguous note, and the action here picks up a year later with no real indication of what exactly happened inbetween, so in some ways it’s almost as if a reset button had been pressed - actually, pretty much the same things seem to happen in the movie as were depicted in the drama series. In truth it’s a no-win situation, as fans of the drama series may end up feeling the film is too much of a rehash while newcomers will end up feeling as if they’ve missed something.

Like the TV series the film also features a number of elaborate musical sequences, all accompanied by a sing-a-long style karaoke lyric track displayed at the bottom. The most celebrated of these is the extended sequence starring the band Perfume, who do actually appear in the film with some of their characteristically complicated choreography. This sequence is a highlight of the film and is almost worth seeing for this reason alone. Mirai Moriyama comes from a strong dance background (in fact he’s currently taking a break from acting and working with a dance company in Israel) and is extremely impressive in these sequences which feature some very difficult combinations. However, the Perfume sequence occurs very early in the film and nothing else really matches up to it. It’s undoubtedly a fantastic episode but it does unbalance the rest of the film somewhat, especially as the tone begins to change soon after. The first half of the film is filled with crazy action and music sequences but the comedy begins to fade out about half-way through to make way for the film’s dramatic element which is, frankly, disappointing.

This is in large part due to the film's central problem - its protagonist is an awful person. Now, that’s not necessarily a problem - there are plenty excellent of films featuring a horrible person in the lead role - but Moteki doesn’t seem to know that its hero is an idiot and seems to encourage the viewer to condone his dreadful attitudes and behaviours. Yukiyo is an entitled, self-centred loser with a madonna-whore complex who only seems to view women as some kind of trophy. The very first time he meets Miyuki he’s quite taken with her but then realises that the fact she’s having a drink with him probably means she sleeps around. Perhaps that says more about his self-esteem than anything else but it’s a fairly worrying attitude. Later, when a really lovely woman is kind of interested in him and declares her love (which was probably quite difficult for her to do), instead of letting her down gently he totally takes advantage of her then practically kicks her out the next morning and ignores her forever more. The guy is a tool, and the sort of man women warn their friends about. What Yukiyo’s really looking for doesn’t seem to be true love or even a real relationship with a regular girlfriend but a series of boosts to his self-esteem. Ultimately, he just want to have sex... perhaps he only wants that so his boss will stop making fun of him. Even Miyuki often seems some kind of Everest like symbol that he just wants to stick a flag in.

Moteki is too long, not funny enough and stars an irritatingly stupid and unpleasant protagonist who quickly tries the viewer’s patience. There are some funny sequences and the Perfume appearance is worth the price of admission alone, but otherwise the film is perhaps for completists only.

6
Worth seeing for the Perfume sequence but otherwise overly long and disappointingly lacking in laughs, Moteki ultimately fails to impress.
LATEST REVIEWS