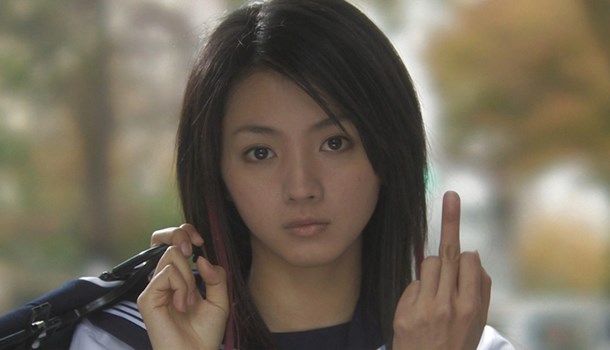 Some films like to stick a theme and run with it for the duration - a nice simple A to B to C plot line where guy meets girl, girl gets kidnapped, guy gets girl back again. Simple, elegant and classic. Then there are films like Love Exposure which will still go from A to C, but in the interim it will bypass B altogether in favour of hitting every other letter of the alphabet in some kind of random order. This is Japanese cinema taking drama to its most insane extreme.

The story is... well, nigh on impossible to summarise but it mostly follows the story of Yu, a high school student who sins to please his crazy priest father whilst also searching for his true love - a girl who epitomises Maria-sama (the Japanese name for the virgin Mary if you were wondering). Along the way he learns the art of ninja panty photography, gets beaten up, in turn beats up various other persons and has an action showdown with the members of a religious cult.

It sounds absolutely insane but the weird thing is it all works, largely because each plot element and character is given a decent amount of time to develop – something which is largely lacking from most Western film. There is a price for this however, which is that the film has a massive four hour running time (reportedly cut down from over six hours)! This is a huge strength of the film for the aforementioned reasons, but at the same time it also plays against the film too as you do start to get a bit fatigued by the film; its complex, dialogue-heavy plot lines mean you do have to concentrate for a long period or else split the film across multiple viewings.

The cast here are great and really carry the film. Takahiro Nishijima (of J-pop group AAA) pulls off an incredibly difficult part as Yu in the lead role with a huge amount of dialogue, action and erm... other things to deal with.  Hikari Mitsushima (best known over here as Sayuu Yagami from the live-action Death Note films) as love interest Yoko performs equally well and makes what could have been a very exploitative role into something much more interesting.

Speaking of the exploitative aspects of the film, it has to be said that director Shion Sono neatly side-steps the pitfall of eroticising his film (no mean feat given the content), choosing instead to take more of a black comedy route for the most part. He also manages to juggle some very difficult themes like child abuse, religion, mental health and voyeurism into a cohesive narrative in a way that is serious yet not stepping outside the boundaries of the humorous tone of the film.

This is certainly a film that you’ll want to see at least once just so that you can get to see where the characters will take you next, though you may want to view it over several sittings as taking it all in via a single dose is a big ask.

Japanese audio with English subtitles.  This Blu-Ray release of the film includes a "Making of" feature, an interview with the film's director Shion Sono and a trailer.

7
In short, this movie is four hours well spent.