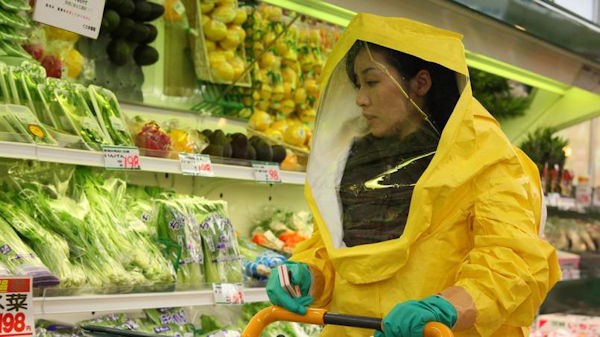 If we thought that Sion Sono had said all he wanted to say about issues concerning the Tōhoku earthquake and tsunami in 2011, we could not be more mistaken. Although Himizu, which was released later that year, was filmed and set in an area of the country affected by the disaster his follow-up, Land of Hope, delves even deeper into the literal and emotional fallout from an earthquake and Fukushima-type nuclear incident.

Two very ordinary families form the focus of this tale, which begins when an earthquake strikes a small rural town. As the locals of Nagashima repair their earthquake damaged-homes and start to resume their daily lives, reports of an explosion at the nearby nuclear power station appear on the news, before the police arrive to evacuate the area.

The Suzukis are ordered to leave their home immediately, but the neighbouring Ono family find themselves on the edge of the contaminated area, their small farm straddling the police cordon. The edge of the exclusion zone is a few metres away from their house, which is deemed to be in a ‘safe’ area, but for elderly farmer Yasuhiko and his ailing wife Chieko it becomes a source of conflict and heartbreak. They try to come to terms with the new threat on their doorstep while reluctantly persuading their son Yoichi and his wife Izumi to leave for a safer and hopefully brighter future away from their largely-abandoned and potentially nuclear-contaminated town.

Sono has acquired, quite rightly really, a reputation for making films that are as shocking and graphic as they are sophisticated and beautiful. In Land of Hope there’s none of the overt sexual content or violence though; it is instead potentially controversial for more subtle reasons. In a situation that harks right back to the very beginnings of the nuclear age with the stigma of the hibakusha following the atom bombings of World War II, we see scenes of evacuated people being refused help or victimised due to the fact that they are from a radiation-affected area; the evacuation itself is carried out with little explanation by officials who blindly follow orders from above, and nobody seems to know when or even if the displaced residents can return.

The unflinching social commentary does not stop there. The setting may be fictitious and Fukishima may only be mentioned in passing, but this movie makes no secret of being topical and duly goes into great detail about how the after-effects of such an event can disrupt lives and tear families apart. After receiving a piece of life-changing news, Izumi’s hope and happiness transforms into a state of paranoid fear that makes her a source of malicious gossip and puts strain on her relationship with Yoichi; meanwhile, Yasuhiko is informed that his farm may not be safe after all as the authorities decide that he and Chieko must also abandon their lifelong home.

It may not have the shock factor of his earlier movies, but Land of Hope is still one of the most emotionally powerful pieces of Sono’s work that I’ve seen to date. The focus on a more traditional type of domestic drama – with the down-to-earth realism that it entails – makes for a more restrained feel, while still retaining the distinctive cinematography and fearlessness in depicting topics that many writers and directors in Japan tend to avoid.

Long-standing fans of his will recognise some familiar faces in the cast too, including Megumi Kagurazaka as Izumi, Jun Murakami as Yoichi and Denden as Ken Suzuki. True to form, the performances are superb and work well with Sono’s striking cinematography to prevent the weight of the story becoming melodramatic and overwrought. Naoko Ohtani’s turn as Chieko, whose senile dementia makes the upheaval even more traumatic, is particularly affecting and memorable. Special mention should also go to Isao Natsuyagi, who sadly passed away earlier this year. He portrays the stoic Yasuhiko with gruff dignity, and that scene where the elderly couple dance together on a deserted beach provides one of the understated highlights of the film.

Although the trials of the Onos occupy a lot of screen time, less is devoted to the Suzukis’. Their circumstances are somewhat less thoroughly explored, so considering how Sono is in his comfort zone with making relatively long movies I would personally like to have seen what they go through in more detail. The international version of Guilty of Romance was so heavily edited down that one of the protagonists felt like a mere side character; I’m not sure whether the planned UK version was subject to similar treatment, but Land of Hope has, at a more conventional two hours and ten minutes or so in length, a similar feeling of unbalanced emphasis, albeit to a lesser degree.

This is one fault I found in a film that is a resounding success overall. Sono doesn’t pull his punches in terms of criticising Japanese society and how earth-shattering events affect people’s relationships at a personal and family level, but the end result feels more mature in this regard, as well as in the choice of subject matter itself. If anything, the more gentle touch – with strains of Mahler in the soundtrack and longer periods of silent reflection – may actually make it a better proposition for a wider audience who previously found Sono’s earlier wild playfulness difficult to sit through. If the latest enfant terrible of Japanese cinema has finally grown up, it’s not necessarily a bad thing.

The Land of Hope was screened as part of the Terracotta Far East Film Festival, and will be released on DVD and Blu-Ray courtesy of Third Window Films in August

Extras in the final retail will release will consist of a 70-minute "Making Of" feature and trailers.