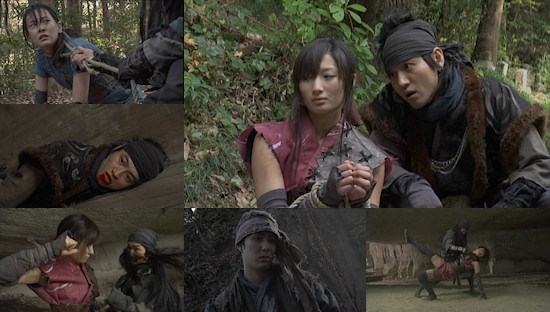 The ongoing feud between the Kouga and Iga ninja clans gives rise to frequent kidnappings at the hands of low-ranking warriors who steal away the women of rival villages. Two such ninjas are transporting four young women through the woods when a mysterious man intercepts them and allows their charges to escape. As the kidnappers try to recapture their victims, one of the four girls, a young ninja named Kisaragi, uses this moment as an opportunity to seek vengeance on these men, who were also responsible for the disappearance of own mother years earlier.

A lot of films like this can be described as an opportunity to switch off your brain and enjoy some straightforward action-orientated entertainment; I understand Seiji Chiba is quite fond of formulaic ninja movies that land squarely in that category. A read through his filmography shows that he specialises in low-budget flicks with ‘ninja’ somewhere in the title, and although he doesn’t go as far down the same road as the likes of Godfrey Ho in the thematic retreads and footage splicing it’s clear early on that this is another effort that tries to stay inside its creator’s comfort zone and avoids breaking the mould.

Unfortunately for Kunoichi: Ninja Girl there’s a lot of stiff competition in the ‘mindless entertainment’ stakes these days, from both genuinely impressive action-fests as well as downright awful “so bad it’s good” movies that are enjoyable for all the wrong reasons. Chiba’s earlier ninja films often have a comedic slant but Ninja Girl addresses quite serious topics such as revenge and human sex trafficking, and some scenes carry a violent misogynistic undercurrent that feels out of place. It’s fair to say that laughs - intentional or otherwise - are few and far between here.

With that in mind, does Ninja Girl at least deliver on the action front? Well, yes, it does...eventually. Rina Takeda has the on-screen charisma and good looks to take the lead role and can also pull off impressive moves (she has a black belt in karate) and the final battle is fairly well choreographed. Because her fight scenes are fuelled by genuine talent, she’s definitely the star of the show and I’d recommend it on her appearance more than anything else. Sadly it’s not until the latter half that she gets the chance to shine, and when the film is little more than an hour long there’s not a great deal of opportunity for her to do so.

The film seems to be satisfied with the short, cheap martial arts B-movie approach but it attempts to deliver a weighty storyline at the same time. It’s perhaps no surprise then that although it never outstays its welcome thanks to Chiba’s briskly paced writing, it has trouble with whatever serious messages it’s trying to convey. The unconvincing special effects hardly complement Takeda’s skills and I was left unsure whether I was supposed to take the whole affair seriously or not. The action scenes and plot twists happen after a half hour or so of exposition that wouldn’t be much of an issue in a longer movie that has more time to tell its story, but in this case it makes for a clumsy and uneven mix.

I’m not dead against action flicks with ropey plots, cheap special effects and mindless violence: as long as it’s done with its tongue firmly in cheek it can be a refreshing break from longer, more demanding films. Besides, if it’s particularly bad it can still be enjoyed as an accidental comedy (as a proud owner of Ninja Terminator by the aforementioned Godfrey Ho, I admit I have actually done this!)  Ninja Girl however feels like a B-movie that’s trying to be something more: it’s too cheap to be convincing, too short to do the plot justice and it takes its subject matter too seriously to be a no-brainer. It’s as though Chiba wanted to ‘do’ deep and dark but ran out of patience partway through.

Japanese audio with English subtitles.  As far as extras are concerned, there’s a theatrical trailer but nothing else of note.

3
Ninja Girl is a showcase for the admirable martial arts skills of its young star but is otherwise just another forgettable piece of low-budget ninja action that doesn’t cover any new ground.
LATEST REVIEWS