Kingdom of Dreams and Madness, The 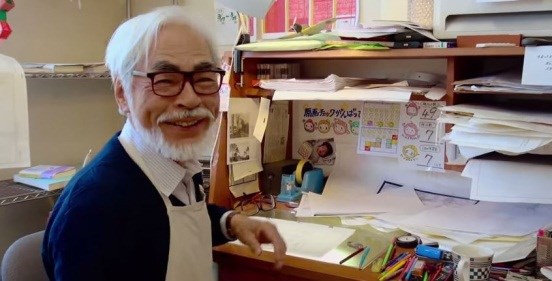 Kingdom of Dreams and Madness, The

The Kingdom of Dreams and Madness chronicles the making of The Wind Rises at Studio Ghibli from partway through production to the film's completion, with a focus on the two men who, alongside Isao Takahata (affectionately called Paku-san by his contemporaries), crafted Ghibli from humble beginnings to become one of the most influential filmmaking companies in the world – Toshio Suzuki and Hayao Miyazaki.

Miyazaki, or Miya-san as he’s called by his colleagues, is remarkably candid on camera and allows Mami Sunada and her crew an incredible amount of access to his home and life. Throughout the documentary Miyazaki is presented as hard-working and somewhat gruff and self-deprecating, an often pessimistic figure who at one point explains why he feels Porco Rosso was a mistake as it was aimed at an adult audience, then on another occasion commenting that he feels that Ghibli will not last much longer. At the time this likely came across as a fairly arrogant statement on his part, yet two years on we face that very possibility. Then again, there’s often the sense that Miyazaki’s seeming indifference to the fate of the studio, his work and his colleagues as a bit of a front, and the cracks show through in quieter moments such as his rescue of some plush goats (destined for dusty storage) from the museum as they’ll entertain children or his disappointment that he was the last to know of his production assistant's pregnancy as she didn’t want him to feel he couldn’t rely on her fully until the film was completed.

“People who design airplanes and machines, no matter how much they believe what they do is good, the winds of time eventually turn them into the tools of industrial civilisation... it’s the same with animation” says Miyazaki over a small meal in his large yet sparsely decorated home. It’s a sentiment that clearly weighs on his mind throughout much of the film, perhaps foreseeing the pro-war allegory that many would come to attach to The Wind Rises. His work on the film is full of worry and uncertainty - he questions himself often and wonders if the film will be completed, or if there’s even a story to be told from the concept. Watching, you have to wonder if this is a result of the project itself, his age or if he’s just always been one of those perennial worriers. In the midst of all this however his passion for the project and its characters often shines through as he discusses the project in production meetings, and also in the gorgeous storyboards which he hand-draws and then watercolours in place of a script. His mounting enthusiasm when Hideki Anno is suggested as a candidate for the lead is palpable and it’s clear these two titans of anime are still great friends as they work closely to bring the film to life. Its moments like these and the amazing vintage footage (which to my knowledge may well never have been seen outside Japan before) and photographs that really make Sunada’s portrayal of Miyazaki shine.

If, like me, you’ve been hooked on Shirobako of late, then the portrayal of the studio itself - mostly the domain of Toshio Suzuki - is equally fascinating, as literally every process discussed on that show can be seen here, from meetings discussing casting and poster art to background artists at work, key art being checked and all the other minutiae that’s required to bring anime to screen. Despite the smiling faces and cheery group calisthenics though, not everything is well at Ghibli. Takahata’s latest film, The Tale of the Princess Kaguya (which will be the focus of a documentary releasing in the UK soon), is not meeting its production deadlines, and during merchandising meetings people fret that sales have not yet returned to pre-tsunami levels while Suzuki worries that too much of their merchandise is aimed at children.

As the film builds towards its climax there’s a certain melancholy feeling to proceedings which is only added to by the wonderful score, which comes only partly from the film itself. As the Ghibli studio is cleared of the debris created by the film’s production and stands empty, the knowledge that at the time of writing they are still empty with no new films in production at Ghibli certainly puts things into a slightly different perspective than was likely intended (two more Ghibli works were released after the documentary's production). Still, if we have seen the end of Studio Ghibli as a film-making company (and I truly hope that this is not the case), then this film at least provides fitting tribute to those behind the studio’s success with its honest and open portrayal of the staff, incredible behind-the-scenes imagery and frank portrayal of what it’s like to be on the front lines producing the great films Ghibli have crafted. The Kingdom of Dreams and Madness is absolutely fantastic, and the only thing keeping it from a perfect score is an inexcusable technical issue with the disc itself which means certain players won't display the film's all-important subtitle track.

Japanese with English subtitles. Extras include: "Ushiko investigates" - a mini documentary that looks at everything not coveresd in the main film including a visit from John Lassetter and a discussion about his relationship with Miyazaki (somthing worthy of its own feature documentary), a digest version of the film set to music, and a trailer.

9
A wonderful insight into the world of Studio Ghibli