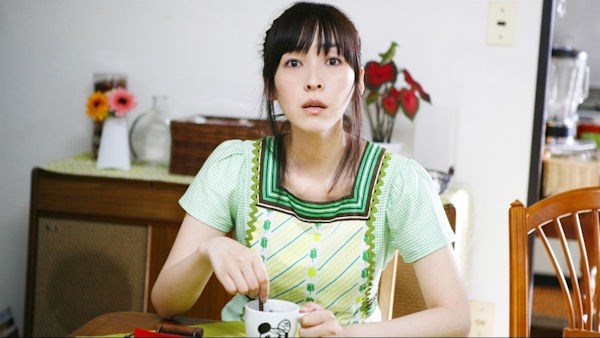 Haname Jinchoge is at a crossroads in her life... or at a dead end, depending on how you look at it. Her job at a publishing company has ended with the demise of the magazine she writes for and her mother is in hospital in a coma (the result of nearly drowning after searching the garden pond for kappa, of all things). Unsure of what to do next, Haname makes use of a chance discovery to track down her long-lost father and finds out that he is an eccentric owner of an equally eccentric second-hand shop. Inspired by her dad’s entrepreneurial spirit and the colourful characters she meets along the way, Haname may have found the life-changing opportunity she had hoped for.

Satoshi Miki is one of those directors who have an instantly-recognisable and unique style; in the case of some, their defining features are overbearing and at times off-putting but Miki’s trademarks are more subtle while still maintaining their own identity. True to form, Instant Swamp is another uplifting and offbeat comedy-drama that places its quirky characters and laid-back life philosophy before storyline, and comes out no worse for that.

Comedy is a subjective thing at the best of times, but fortunately Instant Swamp improves its chances by ensuring that much of the comedy is universal and accessible. It's of a light, inoffensive variety that's far removed from dark, sharp satire but is more in keeping with family-friendly fare that appeals to a wider age range. There are a few plays on words and cultural references that may be lost on international viewers, but its focus is very much on the oddness found within the personal and the everyday.

The strength of the cast is another plus point, and Miki is apparently very adept at bringing out the lighter and more jovial side of the acting talent he works with. A case in point here is the lead, Kumiko Aso, who I recognise from Kiyoshi Kurosawa’s haunting techno-horror Kairo [Pulse]; a role that couldn’t be more different from hers here! The production of some films are tough on the cast and crew, but the impression I get from Miki’s work is that they were almost as much fun to make as they are to watch, and there is great chemistry between the members of the cast.

Strength of plot has never been a particular concern of Miki’s, although I found Instant Swamp to have more in that regard than, say, Turtles Are Surprisingly Fast Swimmers. It’s probably not of great significance when most of the entertainment value comes from the characters and the situations they find themselves in, but I must admit that I welcomed a firmer thread to grasp here. There’s a stronger sense of purpose and direction – appropriate given Haname’s situation really – which means that the underlying ‘take home’ messages of the film come across more clearly.

The ending leans a little further into the supernatural than I expected it to but as out-of-the-blue as it was, it works in terms of wrapping up the story in a satisfactory way. Miki seems to have found a comfortable balance of realism and implausibility so it works as a tale that, within the context of its own universe, makes a lot of sense.

Recommending a Satoshi Miki film is a little tricky in that his particular quirks and flourishes are either something you appreciate or you don’t, and if you’re one of the unfortunate souls who don’t ‘get’ his brand of situation-comedy this won’t do anything to change your mind. The bottom line here though is that Instant Swamp is an optimistic and bright movie to the point where I’d call it life-affirming: it never failed to raise a smile and left me with a warm fuzzy feeling inside for long afterwards... which is the warmest recommendation I think I could give it.

As well as a stand-alone release, Instant Swamp is also available for purchase as part of the Miki Satoshi Collection on DVD, which also contains Turtles Are Surprisingly Fast Swimmers and Adrift in Tokyo

Japanese audio with English subtitles.  Extras consist of a theatrical trailer and additional trailers for other releases.

9
Another charming feelgood comedy-drama from Satoshi Miki: fans of his will love it.
LATEST REVIEWS
Daimajin Collection