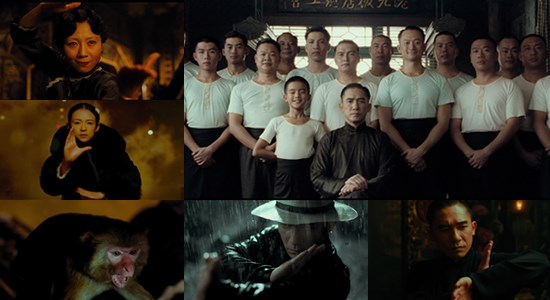 You’d be hard pressed to find a more internationally well-loved Chinese director than the achingly cool Wong Kar-wai. When it was revealed that Wong was going to tackle the story of legendary martial arts practitioner Ip Man with frequent collaborator Tony Leung along for the ride, excitement levels were obviously dangerously high and only set to rise. However, the project never quite seemed to get off the ground and, in fact, several other Ip Man movies were made in the meantime, including the hugely successful series starring Donnie Yen, the third of which is currently in development. The film finally found its way to the Berlin Film Festival in 2013 and received a brief cinema run in the UK last year, but is only now reaching UK homes courtesy of Metrodome.

As usual with Wong, who has never quite managed to find the “save and quit” button, The Grandmaster exists in three different versions - the first being the original “Chinese cut” which runs 130 minutes, the second the “Berlin Cut” which runs 123 minutes and then there’s the “Weinstein Cut” which is 108 minutes long. If alarm bells are already ringing on hearing the name Weinstein, you are unfortunately correct - the UK release is limited to the shorter Weinstein cut. Not only is the film 22 minutes shorter than the longest version, it is an entirely different movie. Subplots have been streamlined or removed altogether, scenes have been reordered and rearranged, and crucially additional voice-over and explanatory title cards have been added for the “benefit” of an international audience. Seeing as few people will have the opportunity to see either of the other cuts of the film, there’s little point in explicating every last difference, but suffice to say if you do have the opportunity to view the 130 minute Chinese version of the film it is a much better option than this overly accommodating “Ladybird book”-style international offering.

As for the plot of this Weinstein version, it runs more like a traditional martial arts thriller, with Ip Man as the challenger who must fight various bosses to become the king of martial artists, with some stuff about not kow-towing to the Japanese thrown in. The film has been “refocused” to centre more definitely on Ip Man himself as the Grandmaster whereas the Chinese cut of the film situates him slightly to one side of things - almost an impassive observer of the chaotic events which overtook the Chinese world from the mid 1930s through to the early 1950s as seen through the mirror of the popularism of the kung-fu world, both real and imaginary. In fact, in the Chinese version the real story is arguably that of Zhang Ziyi’s Gong Er, whose tragic life story serves as a metaphor for the dangers of a stubborn adherence to traditional values. Left with little to reflect on, this Ip Man’s story is relegated to a martial arts serial style retelling of the early adventures of the man who went on to train Bruce Lee, which is both reductive and actually a little insulting.

The Chinese cut of the film is a sweeping, operatic epic rich with restrained emotions and barely suppressed personal and implied national tragedies. Most obviously, the subtleties of the central love story between Ip Man and Gong Er are all but lost in this version as the scenes which allowed them to build up the necessarily emotional resonance have either ended up on the cutting room floor or been rearranged, ruining the careful rhythms of their relationship and robbing the film of its beating heart in the process. Adding to the zombified feeling are the various title cards interspersed throughout the film which simply display a a few stage directions in an extremely ugly white font, almost like the kind you might see in the restoration of a rare film in which some reels are missing and the only way to fill in the blanks for the audience is to provide a scene synopsis for the intervening action. To put it bluntly, this is an extremely amateurish solution which both takes you out of the on-going action of the film and adds to the feeling that one is being talked down to.

However, it isn’t all bad. The beautifully balletic fight sequences and often stunning cinematography have both made it through largely unscathed. The film has an undeniable aesthetic appeal and those action scenes are just as exciting as they are good to look at. Likewise the central performances, though often frustrated by the problems raised by this new edit, are universally strong, though it’s shame that Zhang Ziyi’s quite extraordinary work here is being unfairly disrupted by the butchering of her character arc. Coming to the film cold entirely unaware that another version exists, you may feel it’s a so-so art house kung-fu movie with a bit too much talking, not enough fighting and altogether too much distance between the two, but perhaps not find it altogether unenjoyable.

It’s a shame that the UK will likely never see the longer cut of The Grandmaster. Though apparently Wong Kar-wai worked closely with Harvey Weinstein to create a version that was more accessible to non-Chinese viewers, it’s difficult to believe this extremely dumbed down approach could really be what he was looking for. After all, there is no dubbed track here - viewers opting to watch a subtitled film most likely aren’t looking for something familiar, they’ve chosen it because they’re interested enough in another culture to spend two hours exploring it. They almost certainly don’t need the kind of bold explanatory text offered here (though, really, who would?) and will most likely feel insulted at having been treated like children who need every last little thing explained in painful detail. Nevertheless, if this is the only way to see the latest film from Wong Kar-wai, there is still a fair amount to enjoy, but be aware that it’s far from the true version of The Grandmaster and it may be worth your while to seek out the 130 minute Chinese cut to see Wong’s complete vision.

6
Available only in its international version, this diet version of Wong Kar-wai's The Grandmaster is unlikely to satisfy your cravings for his particular brand of romantic melancholy, but does at least offer some aesthetic pleasures.
LATEST REVIEWS
Daimajin Collection