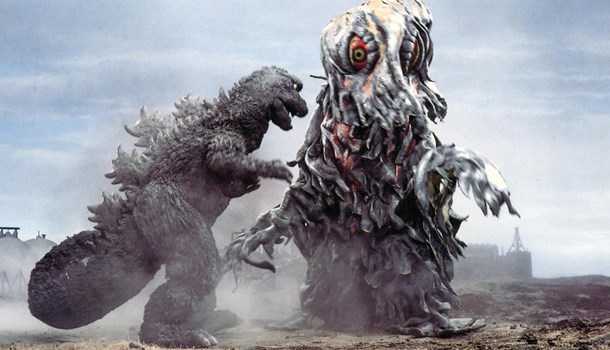 If nothing else Godzilla vs. Hedorah (1971) immediately wears its heart on its sleeve with its juxtaposition of a singer backed by lava lamp imagery belting out a song describing how our rivers and seas and air are being polluted with images of dead fish and decaying junk all washing about in the water in swathes of decaying putrescent polluted sludge. Lovely! Next holiday destination for sure.

But this tells only a little of the story because Godzilla vs. Hedorah is both perhaps the greatest and the worst Godzilla film possible - greatest since the original anyway. It’s a bizarre and inexplicable mix of iconoclastic magnificence and sheer, unadulterated laziness. It’s hard to know where to start with it, as much of the film makes little to no sense, but it has moments of wondrousness that make you question if there wasn’t the ultimate cult film in here somewhere. But first I guess I have to provide some semblance of story, so:

A young boy, Ken, plays with his Godzilla and other monster toys never dreaming he’ll see the beasts for real. His father, Dr Yano, is given a tadpole-like fish by a local fisherman only to find it is no fish but a curious entity that dies in fresh water, thrives in toxic and merges with others of its kind to create a greater monster - Hedorah! The monster evolves, leaving the sea and taking to the earth and skies. Only together can Godzilla and Dr Yano defeat it.

Where do you start?

It’s almost impossible because the film is a surreal car-crash of moments; bits of story collide against kaiju action and smash into psychedelic club action, so that it merges into some kind of narrative, part well-done part on the cheap. It’s such a clusterfuck of a movie that you leave it reeling.

There are moments that are profoundly terrible, often those featuring Dr Yano and his young son, Ken, or his wife whose role is pretty much non-existent, and none of whose performances are stellar. The characters can also be inconsistent, after an early accident involving Hedorah, Dr Yano is mysteriously either working hard or too ill to leave his bed – he’s even driven and lies in the back of a car during the denouement. It feels rather half-assed, like the director forgot to turn up and someone just left the camera running. It’s not helped that much of the story is moved on by fragments of TV news reporting that clearly act to feed us exposition, so the narrative feels entirely under-baked.

Yet at its best the film really does what the franchise needs it to do, which is move the franchise to a new decade and in a new direction. This is psychedelic Godzilla, up to a point anyway. The singer during the title credits we discover is Miki, the girlfriend of Ken’s uncle and some of the moments in her club could be described as somewhere between The Pigeon-toed Orange Peel club scene moments in Coogan’s Bluff and Yayoi Kusama "let’s get naked and paint each other" art of the 60s, when she was in the US. It's also reminiscent of the youth movies from the sixties, so clearly this is moving Godzilla away from its previous incarnations. It also goes full iconoclasm in how it has several animated sequences, such as the one with where an anthropomorphised factory extrudes claws that pick sprouting plants from the ground, clearly identifying how industry is sucking the natural world dry. Later, an animated Hedorah swallows bilge water from a ship. It’s mad and slightly brilliant and very unexpected. It feels like someone has been watching Monty Python and gone full mindfuck. It goes further, into images of slick darkness engulfing clear water and sea fauna to really press home the message that we are killing the planet. And don’t mention how the real Hedorah is shown sucking up factory fumes direct from chimneys billowing toxic smoke like some kind of desperate addict. It’s all utterly absurd and totally wonderful – as moments.

Who said holiday destination? Well, I hear it's lovely this time of year and with only a 10% chance of monster rampage or toxic effluence death.

While the animated and more surreal moments are the most exhilarating, there are others too, including many of the kaiju fights, which if I’m honest I normally find the least engaging elements of the films (except where it remembers to keep it emotionally meaningful) – usually this happens when the series is in the hands of Ishiro Honda. Remarkably, director Yoshimitsu Banno manages to maximise the impact of most of these kaiju fights. There are some elements of it that are crap, like some of the early fights where Godzilla and Hedorah just gesture to one another, as if Godzilla is asking Hedorah to please sit down, but as the film progresses they become far more integral, perhaps because if anything here Godzilla becomes the hero, the protagonist far more than in previous films and it feels like a logical extension of where their narratives were going. Admittedly, the film takes this to ludicrous extremes but by that time you’ve likely either turned the film off or embraced it fully. I mean, there is a scene in Miki’s club where all the dancers are suddenly wearing fish masks, which immediately brings to mind the party scene in the surrealist opening sequence to George Franju’s remake of Judex, where the guests are wearing animal masks. All that is missing are the magic tricks and tuxedos. Then a small sludge ridden Hedorah enters and splatters the place. Prime bonkerness.

The effects, now in the hands of Teruyoshi Nakano are (mostly) surprisingly good compared to the previous films and it was refreshing to move away from those Thunderbirds-esque sets. That said you have to say that Hedorah’s design in terms of concept, a sludge/sewage monster, is a fine idea in principle but the reality of the "suitmation" costumes and models lack the true, slime ridden sludginess that you feel they needed. It is all too solid. It should have oozed putrescence so you could almost smell its toxic effluence, but sadly not. Yet what’s around the disappointing Hedorah is a vast improvement from the last several films, even if the small budget is clear in both the quality of the cast and how at the end, at this large installation there’s a handful of soldiers where you’d expect a bloody army.

Many of the other narrative elements are a very “so what”. The story really flags when following young Ken and his father Dr Yano. Much of the "How Do We Kill Hedorah?" science stuff is all rather absurd, including the fact this local doctor seems to have a hotline to the military. It all returns to how Godzilla vs. Hedorah is a film of moments, and in its moments is curiously remarkable but the intersecting scenes... Well, there the film struggles, like how it lazily uses the TV news to move the story on, or even to suggest how destructive the fight we’ve just seen is, yet we’ve just witnessed a fight with… well, very little damage. But no, the man on the news tells us that over 250 buildings were trashed. Err, OK.  How much of this is budget and time vs a poor script is hard to say. Banno follows the tradition of the Godzilla movies, and though hasn’t Honda’s capacity for pacing, is not too bad visually, even if not as consistently interesting as it could be with some scenes pretty lazily filmed. (Looking Banno up, he was assistant director on four of Kurosawa’s films.) Still there is something ambitious, if failed, about Godzilla vs. Hedorah that endears itself to me. It is not trying to be a traditional Godzilla film and is all the better for that because you feel that the franchise had become tired, repetitive and played out. Instead, with Godzilla vs. Hedorah there is much to enjoy and also to be frustrated about. I guess it all comes down to which side of the fence you fall on and I for one fall on the side of Banno because I applaud his ambitious attempt and desire to push what a Godzilla film can be, and in terms of keeping a series going that really matter because you have to take risks, which is certainly the approach taken by Banno here, while at the same time sending a strong environmental message.

I admit I felt impatient at times and wish the film had been a bit shorter, even if it is still a relatively trim 85 minutes. It could have done with greater sharpness, but because Godzilla vs. Hedorah has a uniqueness despite all the moments of stodge and average acting, there’s a lot to embrace in this magnificently messy failure. But better a messy failure than a shrug of the shoulder copycat wannabe.

Magnificent animated lunacy - with added environmental message, who can ask for more? Not this happy reviewer

7
It should get 3 or 4 maximum but the invention and iconoclastic moments outshine all the crap acting, poor Hedorah design and narrative nonsensicality. Viva psychedelic Godzilla!
LATEST REVIEWS