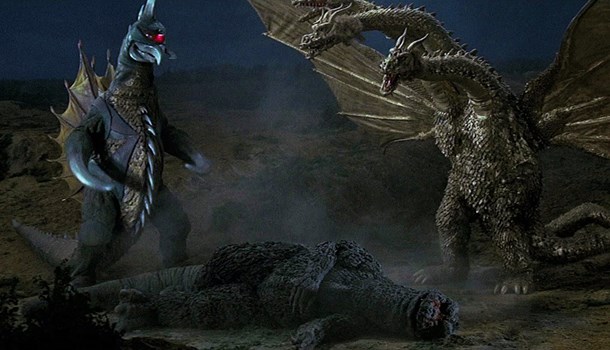 As a general rule, excepting the American release version of King Kong vs. Godzilla, I feel like I’ve been quite generous to the Godzilla series. To be honest they deserved this in the main, because though the quality and budgets reduced, there was often still an enormous amount to enjoy. Initially, Godzilla vs. Gigan (1972) continued this trend but I’ll be honest, sometime after the halfway point of the film some of my patience began to run a little rough.

It’s a shame because this is again a Godzilla film aimed at kids, but with Jun Fukuda back in the director’s chair, the film at least has some fun. Then it just runs out of steam.

Out of work mangaka, Gengo lands a job designing monsters at World Children’s Land, a kaiju theme park under construction, including Godzilla Tower! Visiting World Children’s Land’s HQ, Gengo finds a tape that, when played, is nothing but scrambled noise: a tape that the owners of World Children’s Land want back because they are really aliens out to make peace on Earth through destruction. Tape induced destruction no less, via King Ghidorah and Gigan! Godzilla sends Anguirus from Monster Island to uncover the source of the mysterious tape they hear; Godzilla and Anguirus learning of the attack, take the fight to King Ghidorah and Gigan. Meanwhile Gengo and friends plan how to take down the aliens and their laser mouthed Godzilla Tower.

As stories go it’s again an absolute mishmash of elements from previous films, the aliens wanting peace via destruction using King Ghidorah; Godzilla again in "hero mode" though now openly commanding other monsters! That said the first half of the film deserves some praise for its tongue is firmly in its check. Gengo designing a new monster, it’s body is drawn so that it incorporates the same design as his girlfriend’s dress (who is herself a black belt in karate and the one responsible for getting Gengo the job at World Children’s Land). Godzilla, commanding Anguirus as always barks his sharp address, but the film inserts manga-esque speech bubbles so we literally read what Godzilla and Anguirus are saying to one another. It’s ludicrous but at least in keeping with the manga theme, so I smiled at this and took it at face value. This is not Godzilla taking itself seriously but mainly out to have fun. It even has humour for the potentially bored parents, in one scene Gengo’s hippyish friend is eating a corn-on-the-cob that he’s managed to nibble so that it looks unusually like a penis, then a moment later, Gengo and his friends are all eating some rather phallic bananas, for no particularly good reason than "because".

The opening does a good job of setting up the story, there’s some investigative work by our protagonists and it’s all knockabout fun and well shot by Fukuda, who as always has a good eye for how to make the film visually interesting, as well as keeping the narrative pacy. It doesn’t stand still. It helps that the soundtrack reuses a lot of the music by Akira Ifukube, as this adds a touch of class.

Then King Ghidorah and Gigan arrive and wreak havoc, as the aliens use their two tapes to control the monsters. Their rampage is pretty well done to be fair, though it’s all lacking the human touch. Beyond the Self Defence Force sent to attack, we don’t see the human damage at all. It’s all exploding buildings, often in industrial areas, maybe intentionally so as to avoid the need to show the human impact (and in fact the live action scenes that accompany this in the city suggest no destruction at all, no smoke, nothing). Like the previous film, Godzilla vs. Hedorah the budget for the effects seems more substantial and it shows in these scenes. That said the design of Gigan (or Buzzsaw Belly, as I named him in my head) felt a bit stiff. Capable of flight by some apparent naturally occurring jetpack and with, literally, a vertical buzzsaw down his belly, Gigan nevertheless hasn’t the sinuousness of King Ghidorah and this really shows in the scenes of destruction where Gigan moves clumsily and buzzsaw aside seems a bit lacking in destructive shock and awe, something that I felt as we moved into the eventual showdown with Godzilla and Anguirus.

This is where the film for me really dragged. Most of the last thirty minutes of the ninety is taken up with a protracted battle where our dastardly aliens plot Godzilla’s demise. It’s very much of the "let’s emote at each other, stamp our feet and then wrestle a bit" style of suitmation that, to me, gets wearing because it drags the narrative down to a crawl and it’s often not all that exciting. Unlike the destruction of the city where it’s edited to be more explosive, this just feels like drudgework. True, it does introduce something unusual, Buzzsaw Belly cuts open Godzilla’s shoulder and we have blood, actual Godzilla blood, but mainly it’s all just drawn-out action that for kids might be a lot of fun, for an adult audience it just feels tiresome. It could have been snappier but instead just goes on and on and our protagonists are mostly forgotten except a short bit of story to try and destroy Godzilla Tower, and the aliens within, not to mention their two control tapes. How they do this is on one level amusing but it’s also wholly unconvincing (even if I loved the fact they get to carry boxes stating “TNT” – shame it wasn’t “Acme TNT” and accompanied by Road Runner). Watching this made me think of All Monsters Attack, the first overtly kid’s film in the series and how it was short, not even hitting 70 minutes and really, Godzilla v. Gigan should have been cut by ten minutes, taking out the Godzilla emoting nonsense as it would have kept the action taut. Then again, this is a film for kids. But even so, though the effects budget is better the kaiju action is not filmed with as much panache as Fukuda’s live action elements and don’t even get me started on the reuse of footage from previous films that creep in to pad everything out.

Anyway, the film has some environmental messages for the kids watching it, "be careful with the planet", and dammit if we still haven’t learned that one.

Godzilla vs. Gigan feels like a film for the completists. For all that it reuses plot, the acting is passable at best, the first half is at least fun, then the suitmation wears very, very thin in the second half but still, it’s better than sticking a sharp stick in your eye. Then again, most things are.