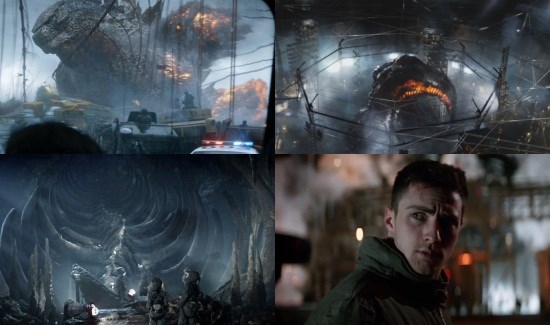 The new Godzilla film has had fans on tenterhooks for a long while now thanks to Hollywood’s much-loathed previous attempt to bring the King of Monsters to the big screen. I was by no means only an observer of this myself - I groaned for an age when Monsters director Gareth Edwards was picked for the job, and then cheered at the glorious revelation that this time they weren’t messing around and Godzilla was actually going to be in the movie rather than a giant iguana. The hype for the film has been huge, with some brilliantly goosebump-causing trailers, but now that the film is here can Hollywood finally capture Godzilla in a film worthy of his majesty, or is this just the latest of a series of remakes of Japanese films that pales in comparison to the original?

We pick up the story in 1999 at a quarry where miners have discovered the colossal skeletal remains of a strange creature along with.... something else. What’s more mysterious is the fact that it appears there may have been other things down there which have escaped. At the same time at a Japanese nuclear power station, run somewhat inexplicably by two Americans and Japanese staff who all speak English, a series of tremors have been increasing in magnitude to the point where Joe has recommended shutting down the reactor. Before he can do so, the reactor is rocked by a huge earthquake rupturing the reactor and causing the evacuation of the town and the death of Joe's wife. Cut to fifteen years later and all is about to be revealed, as Joe and his soldier son Ford discover that all is not what it seems - that hidden in the remains of the reactor is something else that has been kept hidden, something the authorities call MUTO. Cue the giant monster carnage!

Now then, reading back through that last paragraph it seems I’m missing something.... something I haven’t mentioned - Godzilla! Well have no fears folks, because you’ll defiantly get to see him.... eventually, as the king himself doesn’t turn up until about an hour into his own movie. To some extent this is fine - there is such a thing as building tension and setting the scene after all, and as we’ll get to in a moment what we do see of Godzilla is phenomenally good, but the film makers seem to have gone off-track somewhere. It’s very much as if they had seen Michael Bay’s Transformers movies and thought he must be onto something good as they seem to have forgotten that Godzilla is supposed to be the lead here. Instead, the majority of the film ends up focusing on Ford (played so blandly by Aaron Taylor-Johnson that you wonder how he was ever so good in Kick-Ass) and his attempt to reach his wife and son back home, who are conveniently in the city where everyone decides the climactic monster showdown will take place. The trouble is that this plot arc in the film is boring in every sense and meaning of the word, and all it does is overshadow the much more interesting action and the side plot about Professor Sakamoto and Monarch. It also results in that tiresome convention from where the humans have to be found something heroic to do, to show that we’re so strong and good that the nasty monsters can’t beat us. Yes, the original Godzilla film did something similar, but that was a film that used him as a metaphor for the terror of nuclear war and the humans defeating him in the end was a representation of our overcoming this threat to mankind. This film, like the rest of them, has no such message to tell. In fact the film got it so badly wrong that in my screening the audience booed the film when, after the big climactic reveal of Godzilla who showed up to fight MUTO, the scene cut to a little boy watching TV while the big fight happened off-screen.

Alongside this, there are some fairly stupid errors where the film-makers don’t quite seem to get how EMP and nuclear fallout work, but those are fairly easily overlooked in comparison to the above issue.  The only other complaint is MUTO - don’t get me wrong, it’s an okay enemy for Godzilla to fight, but it’s also not particularly interesting. By the end of the film you’ll suddenly realise why all the trailers kept subtly hinting that we might be getting Rodan or Mothra by only showing the MUTO in out-of-focus or silhouette shots rather than just telling anyone that there weren’t going to be so much as a cameo or post-credits teaser for a classic monster (and as a warning, don’t bother waiting for a post-credits sequence, the film makers neglected to create one).

However, now that I’ve got all that moaning out of the way, Godzilla himself is phenomenal in this film. He’s never looked better for starters, with a design that takes the original look and bulks it up in all the right places without detracting from a design that still evokes that classic man-in-suit look. He’s an utter beast who’s going to fight MUTO for us but clearly doesn’t care if we get in his way, and rightly so. He’s not our friend; theres going to be no knowing nods to mankind at the end of the film; he’s just going to annihilate anything that’s in his way. From the moment his appearance is hinted at the tension in the film soars, and when he roars it’s a cacophony of sound more beautiful than the film's entire score. The first big reveal of Godzilla stood out in the open ready to leap into action in a pose almost reminiscent of a gunslinger itching for the draw is beautiful, which makes the subsequent cutaway which we just mentioned all the more agonisingly, crushingly disappointing. But, come the finale, you do finally get to see what you’d come for, as Godzilla smashes through San Francisco in a truly epic fight which puts Pacific Rim’s battles to shame from the first blow to that glorious (oh so glorious) first flash of blue that announces to the world that this is truly the real King of monsters, with his full set of abilities to prove it. Its maybe a ten to fifteen minute sequence with a bunch of cutaways to the soldiers doing something no-one watching the film really cares about, but it shows that there is a genuinely good Godzilla film lurking under the surface here that came so close to being everything that fans had dreamed of.

6
The King of the monsters is back. In the background, if you squint a bit.