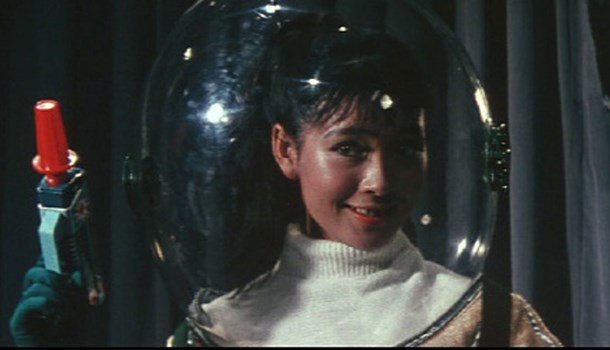 Back in the 2000's Yume Pictures did the UK a service by putting out a lot of Japanese films, most noticeably those by Seijun Suzuki, Nagisa Oshima, some lesser-known works by Kurosawa and several films by Yasuzo Masumura. I’d never come across Masumura at the time and his career baffled me as I saw it unfold, it was the polar opposite of what you would expect: initially an inspiration for new wave directors like Oshima because of films like his debut, Kisses (1957); Yume then released two of his adaptations of Tanizaki novels: Manji (1964) and Irezumi (1966) (Irezumi recently relased on blu-ray by Arrow); Red Angel (1966), a disturbing but brilliantly performed film with Ayako Wakao, was released, and finally Blind Beast (1969 and again recently released by Arrow). Kisses I admit I was not that keen on (but want to revisit - if only I had a copy), Manji, Irezumi and Red Angel illustrate Masumura as a confident director, then Blind Beast veers towards more overt perversity. For his career into the 70s, well, he directed at least one of Shintaro Katsu’s, yes, Zatoichi himself, Hanzo the Razor movies, specifically The Snare (1973 - in an old Eureka boxset), where I recall one of Hanzo’s great weapons is extracting information from women by pleasuring them. So, from the realism of Kisses to beautifully filmed adaptations to a move towards perversity and into, let’s be honest, not Katsu or Masumura’s best moment in The Snare – you expect a director to come from genre, not fall into genre.

Anyway, this is past, but the point is that, seeing as Arrow are putting out more Masumura films, this was a reason to be joyful and Giants and Toys was a film I’d never seen (I also have Black Test Car by Masumura eyeing me guiltily and asking me why I have not watched it).

Young, idealistic publicist Nishi, his manager: Goda, must save World Confectionary’s sales that are flagging compared to their competitors: Giant and Apollo, and is tasked with coming up next season’s publicity campaign. Goda decides upon a young woman, Koyoko, with bad teeth as the new face of World but will she stick to World Confectionary’s script and be their saviour?

Giants and Toys is a satire on consumerism, Japanese work culture and society. Considering it was made in 1958 it is, like the slightly earlier Alexander McKendrick film Sweet Smell of Success (1957), surprisingly modern. With some tweaks it could easily be remade today and feel just as relevant in how the films views consumerism, "climb to the top anyway you can" work culture and the harm that it does to society and the individuals caught up in it.

The film makes no bones about the fact that World Confectionary is falling apart in part due to nepotism. Goda’s boss and current head of publicity is his father-in-law and sick as a dog. The situation is commented upon by those lower down the pecking order: want to get ahead? Marry into the family of the chief exec. I’d like to say our world is free of nepotism but I’ve seen enough of it for it to resonate with how it's still an element of getting ahead in the workplace today. But this is a passing jibe, more important is how Goda is allowed by the board to elbow out his sickly father-in-law. It’s very much a young vs old scenario with the father-in-law being more old-fashioned in his worldview compared to the cutthroat Goda. Nishi on the other hand is trusting. His best mate works in publicity at Giant and he starts to romance the Apollo publicist, Masami. Nishi is happy to share trade secrets with both his best friend and Masami, and you know it’s not going to end too well; it’s no spoiler, it can’t, because the film is just too cynical.

But Giants and Toys also has a strand of humanity that underpins it all. Kyoko, whose family are working class and live in a tenement, is ebullient and embraces her shot at fame, while maintaining an earthy vulgarity. The character is larger than life but is given a balance between wide-eyed innocence and enjoying her newfound fame. Goda initially manipulates her stardom by hooking her up with a vulgar David Bailey-esque photographer who gets her into photobooks. Koyoko as a character is fascinating for how in other films she might be portrayed as a bit of a pathetic victim, overly comedic or sentimentalised or downright dumb, but here she’s arguably more casually worldly-wise (just not cynical) and her ability to embrace what life throws at her, whether working in a taxi office or suddenly thrust into radio and television, she accepts it all for what it is and if anything is a counterbalance to the publicists. It's true that everyone, Kyoko included, is out for themselves but she is about the only one who is not hurt by her success, maybe because it’s not sought after.

That said, if there’s an issue with the film it's that the satire works well because it’s so broadly applicable, but watching the film I struggled to find a centre to it. Nishi, Goda, Kyoko; none of them seemed quite the main character, rather the film slipped between following each of them. The lack of genuine emotional attachment to any of these characters does work against the film. Nishi is the closest to a lead character but is too gullible (we know his best mate will screw him over and Masami likely will too) and wishy-washy to be a properly engaging protagonist; Goda is too cynical and even as we see the damage done to him it’s not enough to make us root for him; Kyoko we sympathise with most but often she’s absent or shown working rather than really delving into her character. It’s not the end of the world I’ll grant you, but it stops the film from being elevated from an excellent film to a truly great one because though some films are fine if you are emotionally distanced from them (think most films by Kubrick where that distance matters), here I feel you need to have a greater emotional attachment. I think we’re meant to feel most keenly for young Nishi, but Hiroshi Kawaguchi just cannot nuance his character enough to really make us care about him. Plus he just feels too much the patsy from the off.

That said the film flows nicely and at 95 minutes pretty much hits the perfect length. It ends as it should, properly cynically even if you’re surprised by one relationship being genuine (though honestly, it’s not the most convincing relationship right from the off so though the intention is right the impact is less effective than it could be) and the film’s themes carry it as does the performance by Hitomi Nozoe as Kyoko. She absolutely nails her character just as Kawaguchi cannot nail Nishi (or rather Nishi is a bit of a cypher to begin with). There is something close to a grotesque at times with Kyoko’s character and Nozoe balances that with her genuine enthusiasm for life. What counts is how Kyoko though in many ways an innocent and is manipulated yet never a victim. She makes money and spends it knowingly. She looks after her family yet embraces buying what she loves for herself. Kyoko has no illusions that this will last forever and yet it might. She is a character of contradictions and Nozoe wears all of these elements of Koyoko’s character as she should, illustrating Koyoko’s move from rotten toothed gaudiness to swanning imperiousness without any of it feeling forced. Though her character admittedly moves in and out of the narrative, Kyoko is the closest it has to a central pivot and a lesser performance could really have skewered the character.

Another thing that Giants and Toys nails are those individual moments: Goda coughing blood on his letter of promotion, the Word Confectionary sign outside the window that is so reminiscent of what Paul Muni’s Tony Camonte in the original 1930s Scarface sees when he looks out of his apartment window that reads "the world is yours", the film connecting the ruthlessness of the publicist with the 30s American gangster; bootleg booze or legal sweet caramels, the battles are just as no-holds-barred.

Masumura had started directing in 1957 and so Giants and Toys was made only in his second year of directing, but in line with so many other directors of the period he was tasked with directing three or more films a year, but it’s a magnificently assured work thematically for what you think must have been considered a quota quickie. True, the lack of a character you really emotionally attach yourself to is a problem, but Koyoko and Goda’s characters generally make up for that, even if Nishi as a character is a bit so-so, and Nozoe’s Koyoko is often a delight when her character could have been so irritating.

As it feels so modern it’s possible that many folks who’d balk at a film pre-(insert decade) might be tempted by the film and let’s face it, cynicism rarely ages badly as we as human beings tend to make the same bloody mistakes generation after generation. I certainly recognised a lot in the offices of World Confectionary that I have seen in the real world, plus I have seen some of the nobler sentiments that Goda and his ilk try to suffocate too.