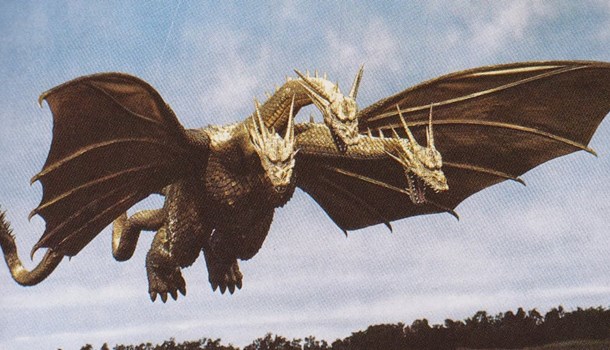 It’s January and the world is in the middle of a heatwave, so of course a bunch of UFO watchers, witnessed by a lone and sceptical reporter, Naoko Shindo, look to outer space for the answers! No UFOs here though, only meteorites falling to earth. Meanwhile her brother, Detective Shindo, is asked to protect princess Salno of the nation of Selgina, who is both visiting Japan and at risk of assassination! Professor Murai returns, to investigate a curious meteorite in the mountains. So, too, Infant Island’s fairy princesses grace Japan and give credence to a woman who both claims to be Venusian and warns of terrible perils, including the most terrible of all, the arrival of King Ghidorah! She also has an uncanny resemblance to princess Salno.

And so on and so forth goes the story of Ghidorah, the Three-Headed Monster (1964)! And really the film, a little like that of returning director Ishiro Honda’s Mothra, has an entirely nutty-fruitcake of a plot. Story and character-wise it feels like the writers have thrown the kitchen sink at it and the film apparently was rushed into production and released in the same year as Mothra vs Godzilla. It shows but it also doesn’t matter because the film ends up being tremendous fun, almost all the more so for the absolute ludicrousness of it all. Everything from how the natives of Selgina tend to dress in some strange facsimile of Elizabethan dress, replete with ruffs, like a nation who has missed out of the last four hundred or so years, to the change in tone with Godzilla becoming one of the heroes now ready to save the Earth all come together with the result of being marvellously entertaining.

Part of this is because the film never really gives you a chance to think. it constantly throws something new at you, whether this is the surreal appearance of the fairy princesses being on a TV show to delight two children (and then to sing to Mothra to the children’s delight), to the appearance of Rodan (not to be confused with Rodin, another missed opportunity: Godzilla repents its destructive ways and becomes a sculptor of renown – our loss, really) from a volcano to further terrorise the world, to the various subplots weaving around princess Salno that intersect with the siblings Shindo. And that doesn’t even go into the psychiatric elements of the plot. It’s one thing after the other but again, the star of the film is director Honda. He manages to orchestrate all the action, the varying elements of the story that cascade down upon you, so it genuinely flows as a seamless narrative. Again, it helps that he just seems to have an innate ability to pace a film so that the monster fights become the highlight but never forgets the human stories. True, none of the characters are exactly remarkable but Honda elicits performances from them that get the best out of limited talent (excepting Takashi Shimura who returns to the franchise though this time as the pioneering Dr Tsukamoto, who will always be a cut above), and the interplay between the siblings is well handled.

And Honda just knows how to stage a film, as evident in how The Peanuts, returning as the fairy princesses for their second appearance in the Godzilla franchise in a row, get a couple of music numbers and where they could have been dull affairs, Honda makes these a visual feast, and ensures they are part of the narrative not just some musical aside that takes us nowhere. It helps that the The Peanuts have combined a rather otherworldly singing voice.

Entirely unintentionally you imagine the film also resonates in two very surprising ways: climate change and conspiracy theorists. Little is made of the unusual weather except to suggest something strange is afoot, but it is January and summer temperatures are being felt. If anything this gets rather forgotten as the film goes on, but uncertain and unseasonal temperatures and the altering climate feels very "now", and the UFO enthusiasts, with their adamant belief that only the stars can provide guidance, and that the aliens are scared away by reporter Shindo’s unbelief feels not too dissimilar to many of the absurdist conspiracy theorists of late believing the nonsense because it’s easier than to look to saner rationales that actually require perspicacity of thought – heaven forbid. Admittedly Ghidorah, the Three-Headed Monster does posit the titular creature is from Venus and princess Salno genuinely appears possessed by one of the last living Venusians so they, unlike our nuts today, might be at least half right!

Ghidorah, the Three-Headed Monster right from the start feels different from previous films because it is the most overtly sci-fi of the first five. Kaiju elements aside, it’s hard to know if the film is taking this course because of expediency or like many film or literary series it starts delving into other genres to find a way to keep it all going. Further narrative changes are evident in how Mothra is called upon to speak to Godzilla and Rodan, to convince them to fight King Ghidorah, which otherwise (according to the Venusian) would be unstoppable. This particular change, villain to saviour feels particularly necessary because without it the film would struggle I think to really engage. Yes, Honda does a fantastic job of building up to the finale and keeping the cavalcade of plot coherent, but it would be just another finale of monster fights monster. Again. No, the Godzilla-Rodan-Mothra vs King Ghidorah adds something new to the mix and manages to make it all feel that bit different even if it is still just monster vs monster. It helps that the special effects as always stand up. The oft-mocked Suitmation is perhaps better for being used more sparingly here than in some of the films and provides suitable visceral and visual thrills. The miniature work is good and I like the design of King Ghidorah. Yes, the lightning that forks from his heads is a gaudy, artificial yellow but it works. Does it look real? Ye gods no but it doesn’t need to. What it lacks in finesse it makes up for in effectiveness. Then when it comes to the showdown it feels like the effects team are having fun trying to work out how to have Godzilla-Rodan-Mothra fight together and that sense of fun really comes across on the screen.

If there is arguably a problem with this new approach it is that of thematic loss. Honda does get in a pitch that they cannot use the atom bomb on the monsters but it means that some of the political edge is lost. Again maybe this is not a bad thing though because that point has been made and no need to repeat it endlessly for fear of it becoming ineffectual.

Though Ghidorah, the Three-Headed Monster isn’t as good a sequel as Mothra vs Godzilla it nevertheless manages to be better than you’d expect the fifth film in a franchise to be. It should be tired and shabby and everyone involved wondering why the bloody hell they can’t be working on the Kurosawa picture instead?! (Apparently Ghidorah, the Three-Headed Monster was filmed at Toho the same time as Red Beard, so it’s possible and Shimura for certain is slumming it by comparison.)

Still Honda shows once again he just has a flair for kaiju pictures and retains his capacity to lend credibility to a ludicrous story, so the fact we can suspend our disbelief for 90 minutes really reserves due credit. The performances, as often the case, are fine considering that the cast, excepting Shimura, are not the most distinguished to grace a film; there are some veterans of the series returning and I suspect they know exactly what Honda wants from them. Ultimately, once again Honda never allows empty spectacle to trump story or human interest but balance it all finely and work up the tension to the finale you know you’ll get: monsters trashing shit. And there’s not a thing wrong with that.

Monsters of the world unite!

7
A fine, fun sequel with Godzilla embracing his caring side. More of the same please
LATEST REVIEWS