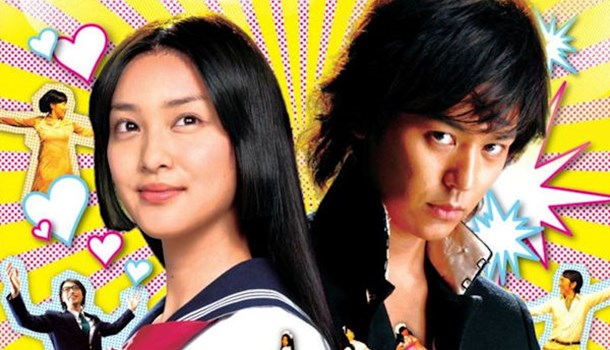 You never really know quite what to expect from Takashi Miike. Back when I first started getting into world cinema, his involvement as director was a warning flag for stomach-churning gore, unpredictable storylines and off-the-wall humour. Even now his name carries an expectation of something startling, brave and original... for better or worse.

When I read that he’d be doing an adaptation of a romance manga in the style of a Bollywood-esque musical, my reaction was “oh, okay then” as opposed to a simple “there’s no way he could pull this off!” There have apparently been previous screen adaptations of Ai no Makoto (Love and Truth) as it’s known in Japan around the time of its original publication; none of which have been released internationally as far as I know, but this was an unexpected choice nonetheless.

Although the approach is unusual, the premise is fairly standard high school romance fare. Following a charming cut-out animation rendered flashback sequence we are introduced to the sweet-natured rich girl Ai and bad boy Makoto: Ai is hopelessly in love with Makoto and, for reasons we find out later, is determined to rescue him from his errant ways. Makoto on the other hand couldn’t care less about any of this, and would rather continue drifting through life and getting into fights with anyone who crosses him.

Ai turns to her wealthy father’s influence to enrol Makoto into her prestigious private school, but predictably his violent and indifferent nature leads to his expulsion and transfer where he feels the wrath of the notorious student gangs. Ai refuses to admit defeat and duly transfers as well, determined to overcome every obstacle and win the reluctant Makoto’s heart. Along the way she has to contend with love triangles, troubled childhoods, armed high schoolers, disapproving parents and questionable choreography.

For Love’s Sake is, for the most part, a playful pastiche of romantic musicals and many of the high school romantic comedies and dramas that have been popular in Japan over the years. I think it’s helpful to be familiar with the titles and tropes that it’s referencing, because it’s every bit as ridiculous as it is heartfelt. The performances are actually very impressive, which applies to the singing too. Newcomer Emi Takei deserves a special mention as the angelic and lovestruck Ai, but all the main cast take the mayhem in their stride. In keeping with the source material it’s all set in the 1970s, which is reflected in the choice of music (which is, by the way, really catchy).

I ought to admit however that I’ve never really ‘got’ musicals. The way that a character bursts into song at a crucial plot point often feels jarring to me, and this film is no exception. Just when you’re getting involved in the storyline – as angst-ridden and overwrought as it often is – the arrival of a 70s J-Pop classic yanks you into an irreverent dance routine before returning to the central theme of teenage love and brutal street fights.

That said, I have seen one or two musicals that I really enjoyed, and of course this isn’t the first time Miike has tried his hand at the genre. The Happiness of the Katakuris is every bit as breathtakingly silly, yet still somehow delivers a sincere and almost profound message... and I loved it. For Love’s Sake has more going on under the surface drama-wise, and is more polished and visually dazzling, but the end result didn’t click with me in the same way.

Even after accepting that viewers’ mileage may vary when it comes to movie musical pastiche, the film still feels overly long. The plot makes an admirable job of exposition though: it fills in the back-stories of the main characters, and I must admit that it was quite moving in places. This background is, however, quite hard-hitting – an unexpected bedfellow for lighthearted tunes and knowing nods. As the pieces fall into place there are longer and more drawn-out fight scenes and it becomes a heavier and darker affair. This shift in tone sees the balance tilt away from the music and towards a series of increasingly large action set-pieces in which both boys and girls raise fists and whatever weapons happen to be at hand, bringing it all to a suitably outrageous and bloody conclusion.

For Love’s Sake seemed to pull me in two different directions. On one hand it’s anarchic and tongue-in-cheek with a cast of larger-than-life characters and typical Miike comic book violence; on the other hand it serves up well-rounded characterisation and deals with some emotional issues that beg to be taken more seriously. In terms of acting and production values I heartily recommend it, but for some viewers the end result might be too baffling and frenetic to truly enjoy.

Sadly I find myself in the latter category, but for all my frustration at least I didn’t feel bored. For a film that takes the well-trodden path of angst-laden teenage romance for over two hours, that’s an achievement in itself.

A trailer, almost thirty minutes of musical numbers, a making-of documentary and a selection of other video previews for Third Window releases.

7
Chaotic and camp to the point of excess, this is nevertheless an absolute riot for Miike fans.
LATEST REVIEWS
Daimajin Collection