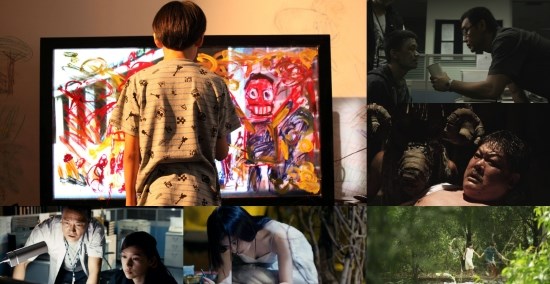 Careworn detective Han Wong finds himself in a difficult position when a mentally unstable young man confesses to a murder... the bizarre twist being that the supposed victim is found to be alive and well. Left with no choice but to let this seemingly innocent (if clearly psychologically disturbed) suspect go, Wong and his team think nothing more of the strange encounter until that very murder takes place soon afterwards. Filled with guilt for a death that he felt he could have prevented, Wong tries to cover up his mistake while attempting to track down the perpetrator, who goes on to commit more killings that are inspired by Brothers Grimm fables.

Fairy Tale Killer boasts some experienced Hong Kong acting talent including Sean Lau, Joey Meng, Baoqiang Wang and Elanne Kwong, and makes inventive use of the often-overlooked darker side of children’s folk stories as a springboard for a shock-filled crime thriller. Running parallel to this main thread of the story is the personal life of the beleaguered hero, struggling with office politics and family difficulties.

Serial killers, and the troubled cops who hunt them down, are a cinematic staple these days and it’s clear that Fairy Tale Killer is very much in the tradition of Thomas Harris’ crime novels and David Fincher’s classic murder-mystery thriller, Seven. One of this film’s more successful aspects however lies in the way in which it depicts the drama surrounding Wong’s stagnating career, troubled home life, and the knock-on effects that the challenges of his investigation have on the relationships with his wife and son.

After the intriguing premise and surprisingly well-rounded portrayal of a flawed hero, Fairy Tale Killer is sadly let down by a script that is riddled with inconsistencies and is wasted on its talented cast. The reasoning behind the serial killer confessing at the beginning is never satisfactorily explained, and the increasingly elaborate nature of the murder methods – especially the impressive finale that wouldn’t be out of place in a Saw movie – fail to be convincing given the mental state of the man who planned them.

Other minor threads, such as corruption allegations in Wong’s detective team and the mental problems that his own son and the young woman who is the killer’s friend and accomplice both suffer from, are introduced but not really explored at length. Similarly, the historic connection between Wong and the killer, which is touted as the reason for their rapport at the beginning of the film, is thrown in towards the end as a flashback, by which time it feels irrelevant and lacking in the dramatic impact it deserves.

The viewing experience is initially positive and is in some ways very interesting, yet it is frustrating in others and by the end the screenplay cannot measure up to the concept. The gory details of each of the murders are shown very briefly or kept out of shot altogether, presumably to keep the feature to a ‘15’ certificate; this decision, and the choice of murky cinematography that robs the sets of their full atmospheric glory, does more harm than good to the shock factor.

Danny Pang clearly knows how to create evocative imagery on-screen, but in terms of storytelling Fairy Tale Killer is somewhat lacking. Attempts to whip up an atmosphere of tension and foreboding rely on unsubtle cues of background music, making the end product feel ham-fisted and unsophisticated. It was a brave move to introduce a hero who is shown as often conflicted, sometimes foolish and on occasion almost unsympathetic; it’s also difficult to create genuinely menacing antagonists while handling the depiction of their mental issues in a way that’s not exploitative. On these fronts Fairy Tale Killer fares reasonably well, but the fact remains that its shortcomings make it a hard slog by the end.

A short interview with Sean Lau, a collection of on-set production clips, plus Terracotta trailers

5
A promising start with an interesting premise is let down by a muddled script and plot holes. The end product is a frustratingly average psychological thriller.
LATEST REVIEWS