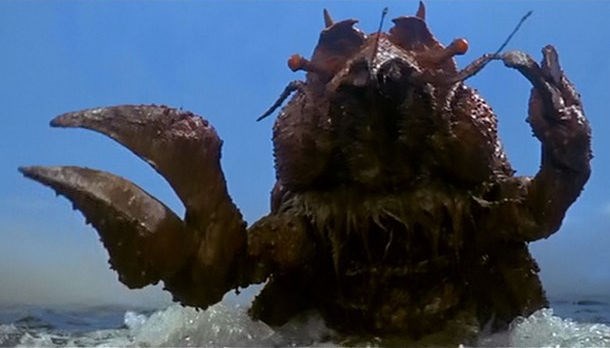 All change! Ishiro Honda makes room for director Jun Fukuda and the film? Why Ebirah, Horror of the Deep (1966), what else?

A wise woman has scoured the underworld but can find nothing of Yata, whose ship is lost in the South Seas! So off goes his brother, Ryota, to demand more searches! Finding no help he spots an advert for a dance marathon that conveniently rewards the victor with a yacht. Arriving too late to take part, instead two exhausted dancers collapse near him and agree to drive him to the yacht. Illegally entering it, they meet Yoshimura who may or may not own the boat. Unbeknown to all, Ryota steals the boat, steering them out to the South Seas and a storm, a shipwreck and a mysterious island overseen by the mysterious military body, The Red Bamboo – importing slaves from Mothra’s Infant Island. The island is protected by Ebirah… at least until Godzilla stirs.

If a subtitle for this film existed it would likely be: How the Mighty Have Fallen. Ebirah, Horror of the Deep is Godzilla on a budget and aimed more and more squarely at a younger generation. Its storytelling is mainly of the lazy variety even if it runs at pace. Even before Ryota’s theft of the yacht that he manages with supernatural ease - we all know the rich and famous leave their yachts unattended and with the keys in the ignition, supplied up and ready and waiting for ne’er-do-wells to come and nab them... Them's the rules – the two dancers, after three days of dancing seem curiously lacking in exhaustion. They are totally up for a drive when in reality they should be unable to move from aching muscles and be asleep on their feet. But Ebirah, Horror of the Deep doesn’t care much about verisimilitude. If anything it’s more interested in careening carefree across a plot that ensures we tick as many of the boxes as possible: scantily clad native girl from Infant Island to be with the guys? Tick. Infant Island prayer song and dance routine? Tick. Young male hero without a clue? Tick. Older man – Yoshimura – to provide guidance to the young and find redemption? Tick. Villainous enemies welcome to trade in slaves? Tick. Heroes bravely venturing upon enemy territory? Tick. And so on and so forth.

Okay, so many people might not care about the plot and just want some delicious kaiju action - or just plain action - but if so, this is definitely where the scrimping and saving is most apparent. The effects are no longer directed by Eiji Tsuburaya, even though he’s prominently credited with having supervised them. The Red Bamboo compound looks even more Thunderbirds than anything in the previous film, Invasion of Astro-Monster. The model work especially is jerky and so unconvincing that it’s hard to take it seriously. The matte work is wholly unconvincing (except, curiously, the returning fairy princesses of Infant Island – even if played by the less entrancing Pair Bambi instead of the more engaging The Peanuts). It feels like TV work, probably because that's where effects director Sadamasa Arikawa had been working at the time. You can imagine the disappointment of Arikawa, enticed by the promise of a bigger budget to then be asked to put TV on the big screen (with predictable results).

And the kaiju action is not much better. Let’s be blunt, the main issue is Ebirah itself. A giant lobster that cannot leave the water and generally just flails around a lot - even wielding giant claws just doesn’t scream "terror!" let alone "horror!" Ebirah’s design is okay, but the concept just feels pointless. Rodan, Mothra and Ghidorah can fly and are able to attack, like Godzilla, by means other than just hitting things. It’s noticeable that Godzilla, finally facing off against Ebirah, doesn’t really use his radioactive breath from a dry land distance, as this would leave Ebirah completely unable to fight back, so instead Godzilla must wade into the water, when he could easily just boil him alive. Cue much kaiju emoting, as if both creatures are signalling: mine is bigger than yours. Then Godzilla gets to chuck rocks and Ebirah bats them back like a game of tennis. Admittedly this does have a certain tongue in cheek amusement factor to it, but it's unlikely to amuse anyone who has already reached puberty. Again, any of the thematic elements of Honda’s earlier films is effaced in favour of a film that is aiming no higher than a standard action flick. This is reflected in how Godzilla continues as the nominal hero – to the point where our protagonists cheer Godzilla on, happy to overlook the destruction he's caused in his litany of previous films. It feels like Godzilla is cast – and is reflected in some dialogue – as the good atom bomb, the one used wisely. Considering the tone of the earlier films this seems a bizarre path to take, let alone considering history itself.

It’s not all bad though. Director Fukuda thankfully seems to have a pretty good grip on the reins, so that for all that the film is silly and the story ludicrous, he keeps it snappy and so it’s never boring. He also has an eye for the dramatic image and moment. The discovery of Godzilla is a strikingly effective moment and wonderfully expressed in a visual sense. Equally, the obligatory scenes on Infant Island (where the natives are trying to wake a sleeping Mothra) is, like Honda's work, well composed even if the smaller budget really limits what he can do. Like Honda in Invasion of Astro-Monster, Fukuda is clearly doing what he can with poor source material and a mainly faceless cast, especially the youngsters who seem to be yet another in a long line of dime-a-dozen actors of the period that you genuinely cannot tell apart, save for "this one does comedy", or "this one seems handsome enough to be the lead". At least Akira Takarada as the older, dodgy Yoshimura (another veteran of the franchise) seems to be having some fun and has something approaching screen presence.

I cannot say this is the worst film to date as that has to go to the bloody awful King Kong Vs. Godzilla, but then that's with the caveat of a dreadful US release rather than Honda’s original, regardless of state of restoration. At least this film is fun in an entirely throwaway manner and there’s enough to Fukuda as a director to wisely keep the story going furiously so that we don’t question things too much.

Just try to ignore that Ebirah as a monster is a bit crap.

Even Kumi Mizuno so striking as Namikawa in Invasion of the Astro-Monster fails to make an impact, knife or no

5
Godzilla for kids; reasonably fun and fast, but only if you park your brain at the door and try not to think about what a crap monster Ebirah is.
LATEST REVIEWS