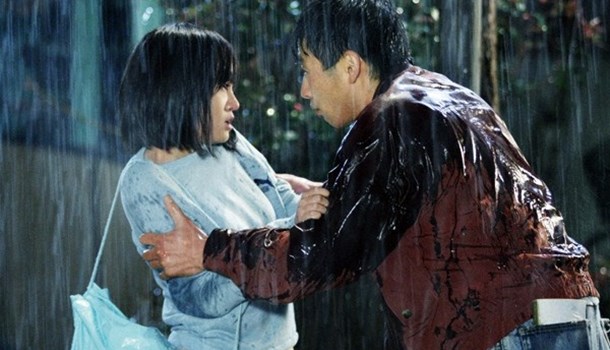 Nineteen year old Kanta (Mirai Moriyama) has been working as a day labourer since dropping out of school at 14. After his father committed a crime so heinous that it hit the TV news and destroyed his family’s lives too, Kenta seems to have abandoned his old life completely and has been living a hand-to-mouth existence by himself ever since. The only thing he really loves to do is reading and he spends any ‘disposable’ income in a small second hand book shop. Stuck with a child’s mentality, he spends all his money on books, the cheapest food, cigarettes, alcohol and sex services. He never pays his rent, doesn’t seem to have any friends and is trapped on a one-way trip to being a shouty old man on a park bench.

That is, until he meets student Shoji (Kengo Kora) who’s also working as a part-time day labourer to supplement his studies. Shoji is educated, middle class and classically ‘well brought up’. Nevertheless, he strikes up a friendship with the rough and uncivilised Kanta and is at first amused by his outrageous behaviour. Shoji forms a sort of bridge between Kanta and the rest of the world and even helps him talk to the girl in the book shop that he’s developed an awkward crush on. For a while the three form an unconventional circle of friends but as time moves on Kanta’s behaviour becomes less and less palatable and ruins the fragile beginnings of a normal life he’d begun to build. Can someone so lacking in social civility ever hope to rejoin society in any meaningful way?

It’s never explicitly stated in the film but The Drudgery Train takes place in the late eighties in Japan, towards the end of the bubble period. As such there is an implicit social criticism that while the majority of the people were having a great time living it up with impressive salaries and imported goods, there were also those struggling at the bottom who could never really get started and whose labour was being exploited to build this great new economy that everyone else was busy enjoying. The work Kanta has being doing - since most people would consider him to still have been a child - is hard labour and the conditions are tough. Needless to say the work is poorly paid. True, nobody forced Kenta or the other workers into this way of life but dropping out of school at the middle school level makes you pretty much unsuitable for any ‘good’ job. Although Kanta does actually get a promotion into the warehouse which is less strenuous, witnessing a serious workplace accident that renders a colleague unable to work and refused insurance because they’ve all been employed on a day labourer basis leaves Kanta thinking he was better off as a grunt.

Though he must be intelligent, his reading ability obviously remains high despite having left school at such such a young age, Kanta is in some senses arrested. Trapped in a state of perpetual childhood, he’s completely incapable of taking care of himself. He doesn’t know how to manage money and it never occurs to him to prioritise things like having the rent money ready on time - he’ll simply find another place when he gets kicked out of this one. Needless to say it hasn’t occurred to him that you can only do that so many times. He’s also completely uncivilised and thinks it’s acceptable behaviour to defecate on your ex-landlords floor after they’ve evicted you, as well as regarding things like peep shows and prostitution a normal part of life. He did once have a ‘girlfriend’ he claims, but as it turns out she was also a sex worker and his relationships with women are firmly those of a fifteen year old boy.

The crime committed by his father disrupted the entire course of Kanta’s life. Because of that act and the misery it brought about, he’s had no proper social grounding and civil education. He simply doesn’t know that there’s anything wrong in his behaviour. He says what he thinks and then he often gets jealous and says something cruel that he probably doesn’t really mean. Being separated from his parents at such a young age has made him hard and confused about how to live in the world. His behaviour is often appalling but the viewer forgives him because we know much of it is not really his fault. He isn’t like this because he’s a bad person, he just never had anybody to teach him the proper way to behave.

There is, though, one possible salvation - his love of books. Put on the spot at one point about what it is he’d really like to do, Kanta says he thinks he could write a book one day. His colleague laughs at him; how could someone who never even went to high school write a book? But Kanta is undeterred. It may seem unlikely, but there is one glimmer of hope for him in this otherwise grim existence. The Drudgery Train tells what is at its heart quite a sad story about someone who just can’t seem to catch a break in a warm and humorous way. Kanta may have squandered opportunities and ruined friendships through his own self-destructive behaviour but there is hope and the possibility that a dream might be realised, even if it seems impossible. At the end of the day it’s up to Kanta to change. He has to find the desire somewhere to live differently, but we as the audience are hoping that he will someday have the normality he craves with friends and a proper girlfriend, and perhaps might actually learn to pay his rent on time! The Drudgery Train is one of the finest films to come out of Japan in quite some time and is an absolute must see.

The Drudgery Train was screened as part of the 2104 Japan Foundation Touring Film Festival at London's ICA 4th February and Bristol Watershed 18th February. Following these screenings it will also be shown at the Showroom Cinema Sheffield 12th March 2014.

9
A surprisingly moving film about an unpleasant character that manages to tell a difficult story with warmth and humour, The Drudgery Train is one of the best films to come out of Japan in recent years.
LATEST REVIEWS