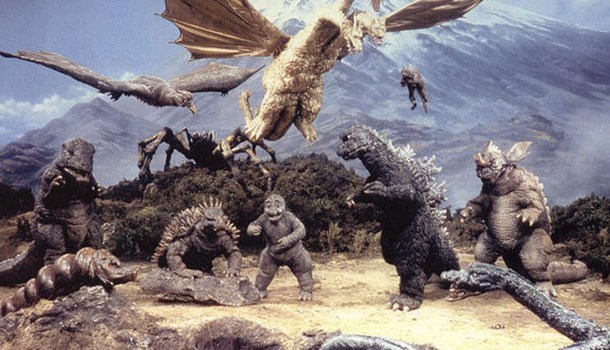 One of the immediately intriguing things about Destroy All Monsters (1968) is how, as the credits start, the music is far more compelling than the last few films in the series. It captures the attention. Then Ishiro Honda is part credited on the screenplay; it is revealed the music is by Akira Ifukube, who wrote the very striking score for Godzilla and many of Honda’s sequels and things start to fall into place. The credits themselves are appealing: angular, coloured shapes overlaid on the images that contain cast and crew details. It feels a far cry from the last two films, and stylistically more assured and mature. In short: this feels low budget but has style and finesse, as if someone really cares. Yes, it can only mean the return of Ishiro Honda to the director’s chair!

The millennium is nearly upon us, and so it is that Godzilla and all the other monsters have been captured and imprisoned on Monster Island! Under the watchful eye of the United States Science Committee, Godzilla and co. roam free but are unable to escape; but then a gas permeates the science base on the island and all contact is lost! A science team based on the moon are sent to investigate in their rocket-ship, SY-3. The base having lost control, the monsters are suddenly free of the island and on the rampage, trashing capital cities all over the world!

It’s okay though, aliens, the Kilaaks, are controlling the monsters and all will be well and a new world will be built, in the ashes of the old… if we obey, and…

Cue a multitude of plot twists, turns and variations until your head spins The Exorcist style. And, you guessed it, it all ends in a giant monster Battle Royale.

As always, Honda shows he is visually a cut above what you would expect from an umpteenth sequel. Once again it’s in the small things, like the two shot where our scientist protagonists interrogate a possible Kilaak agent wherein they are framed so their faces appear in the circular spaces of an iron-work grill. It just speaks to his clarity of filmmaking, and his attention to detail that allows the film to rise above what it could be under lesser hands.

It's this innate understanding that Honda possesses that keeps the film visually interesting, which really matters as the plot is pretty much mad as hammers. I’ve mentioned how in the last few films the special effects budget is clearly scraping zero and Destroy All Monsters is no different as once more the effects feel not dissimilar to the old Gerry Anderson Supermarionation sets and model effects. I felt this all the more watching Destroy All Monsters, perhaps because of it being so overtly sci-fi. The film ventures into mind-control, the aliens all wear shimmering silver lamé headcovering/bodysuits while trying to look enigmatic, and the rocketship, SY-3, seems to be able to do anything and go anywhere. Go into space? Check. Go into combat within Earth’s atmosphere? Check. You name it, the SY-3 will do it – about the only thing it doesn’t do is turn into a monster. Now that would have been something.

Yet for all that this is hokum, it’s done with aplomb and that is what matters. Who cares that suddenly humans have lasers ( though here they are dubbed "masers"), and the Kilaaks can mind control monsters and even human beings and that the plot of aliens coming to Earth and wanting to lord over us reeks of Invasion of Astro-Monster (and again King Ghidorah is controlled by the aliens and used as the ultimate weapon), none of this really matters as Honda just seems to be throwing the kitchen sink at it, keeping the story moving at such a speed that sometimes you wonder if you blinked and missed something. It barrels along at such a pace that you forgive some of the more baffling elements of the plot or those which are completely, unapologetically deus ex machina. If Destroy All Monsters bothered to pause to explain itself you suspect it would be become bogged down and dull, instead it goes full monster on us, revelling in the monsters venturing forth to trash the world once again before ending in The Big Battle: King Ghidorah vs More Monsters Than You Can Shake A Stick At.

But for all this, Destroy All Monsters has a sense of fun and you feel like someone actually cares about how the film is made. Again it’s in the small things, such as the use of different coloured filters over each explosion when Godzilla takes his revenge against the Kilaaks. It is in part you suspect to cover the poverty of the effects, but the fact Honda and his team do all they can with what little they have is the point. It stops the film ever being boring and that’s very much in the film’s favour because it could have become very tiresome very quickly, especially with those cheapo effects.

The performances are what you expect: just good enough to pass muster. Kaiju regular Akira Kubo looks just handsome enough to warrant the attention of his young girlfriend and has just enough b-movie lead appeal to play the captain of all-purpose rocket-ship SY-3. Jun Tazaki, the perennial military commander or scientist, has just enough of an air of leadership to allow us to believe Dr. Yoshido could run a scientific organisation and command the planet’s resources in its protection.

Still for all the fun to be had there is an air of "more of the same" about Destroy All Monsters, and being the ninth in the set of 15 films it did leave me wondering: where is there left to go? I can but find out and guess that I will, for good or ill. As next comes All Monsters Attack and doesn’t that title sound curiously like Destroy All Monsters?