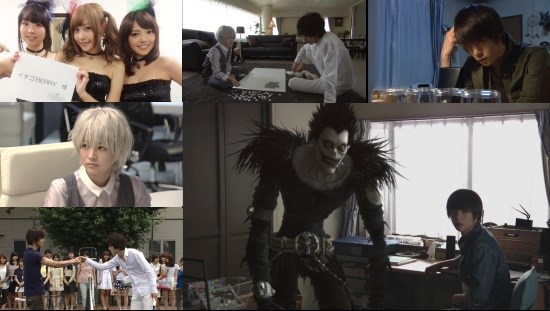 Since the publication of the manga in 2003 and the broadcast of the phenomenally successful anime in 2006, Tsugumi Ohba’s Death Note has had a huge impact across the world - and not just within the realm of anime, with the series inspiring everything from the swarm of cosplayers still found at cons today through to the somewhat darker allegations of children writing classmate’s names in their own Death Notes. Even Hollywood has had its eye on the property with the Western film rights currently held by Warner Bros, with Adam Wingard (whose only claim to fame is a couple of low budget horror films – imagine what someone like Fincher could do with this material) currently slated to direct. Despite Hollywood dragging its heels for six years though, Japan has had a much better track record, producing three live-action films based on the property with a fourth, Death Note 2016, due next year. Keeping the franchise going over the past season has been a live action TV series simulcast by Crunchyroll in what is hopefully the first of many broadcasts of often hard to see liveaaction series (they’ve already announced Anohana for the coming season). With so many adaptations around the question must become – does Death Note have enough scope that this series has anything new to offer?

At this point the plot of the original is pretty well known and it’s where we start off for the series. Light, a college student, is minding his own business when out of the sky drops a black notebook. When he opens it he finds a number of rules similar to those you might find in a chain letter detailing how the book can be used to kill people. Angry at the actions of an old school bully who has re-entered his life, Light scrawls his name in the book and is horrified when he shows up dead shortly afterwards. Although initially sickened by this, Light rapidly becomes drawn to the power of the Death Note and its guardian – the Death god Ryuk - before entering a deadly game of cat and mouse with the world’s greatest detective (or second best anyway – my British pride compels me to point out that Sherlock Holmes was unavailable), the enigmatic L.

The question about Death Note is: should you judge it on how well it adapts the original manga? It certainly hits all the main points and a lot of the characters are still around performing the same functions, but there are also huge differences. Is the series worse for this? Well, yes and no, because a straight adaptation would be boring - you can already go and see the anime for that - but at the same time a totally different treatment would likely have alienated a lot of the series' built-in audience. On the other hand, a lot of the changes that have been made are great ones – L is shown as a huge germophobe for example, leading to the comic spectacle of Watari spraying everyone with disinfectant every time they walk in the door. However, great as the differences are they don’t really mesh well with the original story leading to some pretty jarring moments and awkward character development – Light's journey from a normal student terrified of the power of the Death Note to a maniacal supervillain is almost instantaneous and pretty nonsensical for example. It also creates issues with the pacing of the story which, especially in the early episodes, keeps lurching to a halt as the writers decide they need to jump from the original story to the new one and back again. The result is a plot that has a lot of fantastic moments and twists that will surprise even people who’ve seen the original in a good way, but at the same time one which isn’t wholly consistent in its execution.

One thing that is consistent however is the cast, who are uniformly great throughout the whole series. Masataka Kobota as Light is great fun to watch, as he plays Light both as the unassuming helpful student and the villainous Kira. His Kira does, it must be said, seem to come from a different show altogether but it’s still good to watch as he chews the scenery in a way that’s cleverly inspired by Gollum as much as any of the other incarnations of the character. Kento Yamazaki’s L is equally good, although appropriately it’s a much more subtle performance which plays cleverly on your expectations of the character and subverts them regularly. If anyone suffers through the series then its Misa and Near, though not through any fault of the acting. Hinako Sano’s Misa is cute as a button and is great fun to watch but you can’t help but wish the writers had found more for her to do as she remains the same two-dimensional character she’s always been. It would have been nice if the character had been written with more depth. Mio Yuki’s Near however doesn’t lack in the writing department but in the pretty idiotic decision to have the very pretty and very obviously female actress play a boy in a bad wig. This may be in the tradition of theatre but is doesn’t stand up to the scrutiny of the camera, and frankly there’s no reason for Near to have to be a male character given that nothing in the story of the series or the original work really gives any need for him to be male; the end result is disconcerting and distracting.

Visually the series looks like what it is – a modern day cop show made on an average budget. There’s nothing wonderful or horrible about it. You do of course get Ryuk and Rem as CG characters and they look okay for the budget that the series had to work with, but at the same time you can’t help but feel that having actors in prosthetics would have been massively better.

I do have to recommend Death Note as being worth a watch, all being said. Whether you’re a fan of the original or if you’ve never dallied with it before its enthralling - there’s something here that you can find interesting and, unlike the frankly dragged out and overblown 37 episode anime series, this clocks in at a trim eleven episodes (albeit 40-minute ones). Whilst it’s not quite up there with the live action series of Sailor Moon and Cutey Honey it’s still a great watch.

7
A human whose name is written in this note will watch a good TV series.