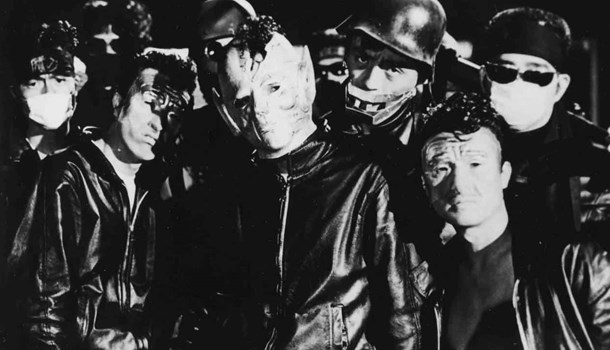 Fresh from the smell of burning rubber that was the Arrow Video release of Burst City (1982), Third Window Films have followed up with Sogo (now Gakuryu) Ishii’s 1980 earlier student film, Crazy Thunder Road. Made as the culmination of his university course, the film was picked up by Toei and let loose upon an unsuspecting audience. And now, available for the first time outside Japan, it was time to find out where the Crazy Thunder Road would take me.

The biker gangs of Japan unite; so Ken, leader of the Maboroshi (Phantom) biker gang hangs up his helmet in favour of his girl, Noriko. Yet maverick individualist, Jin, head of the Maboroshi Kamikaze is having none of it and plans to fight on. And fight Jin and his remaining friends will have to, until approached by ex-biker, Takeshi, and the remaining Maboroshi Kamikaze are drawn into a bizarre fascist national defence force. Ever the maverick, Jin isn’t having any authority lorded over him.

Crazy Thunder Road is a classic example of micro-budget explosion, crashing on screen in raw energy, fast cutting and energetic, with an abrasive enthusiasm that can be a dizzying experience. The film wears its lack of budget proudly and strains against the constraints of what it could be, what it should be, by tearing its own cinematic space.

It's a weird beast. You suspect to see heavy influences by the road-warrior road-war energy of George Miller’s Mad Max and, initially, the narrative seems enormously indebted to Walter Hill’s The Warriors. Yet for these obvious analogies, Crazy Thunder Road blazes its own unique path, equally influenced by punk music, and feels like an extension of the 1960s new wave teen films. Yet Crazy Thunder Road is a film almost without context except some opening images of black and white volcanic activity; set in the near future (based on in-film graffiti you assume 1986-7), except for what little we learn about the biker gangs and the personal dynamics there is no wider social context or story that is explored. Why Jin and his gangs exist and why their brutal, violent individualism is necessary is not explained in terms of any social contexts. We can perhaps discern that this is a dystopic future; though if so, it is because this is all that we get to witness on screen. I'd be surprised if Crazy Thunder Road didn’t influence Katsuhiro Otomo’s Akira and that film (I admit to never having read the manga) provides glimpses of the wider social world; no, Crazy Thunder Road leaves us totally at sea, and it’s an intriguing conceit, because we may be drawn to Jin as a passionate individualist but it also means that we have little other reason to sympathise with him, as we don’t know what he’s fighting against. Yet it works because his violence and his indignation is directed not against apparently innocent bystanders but those in the united biker gang or the weirdly militaristic nationalist force Takeshi draws him into, all of which are if anything far more sinister than Jin. He too is made sympathetic – as much as his character can be – by the connection to his remaining kamikazes; fiercely close and defending of his friends. Unlike Ken, who looks to escape with his girlfriend and play boardgames in an empty bedroom, Jin’s remnant biker gang is his world, his family and his future. 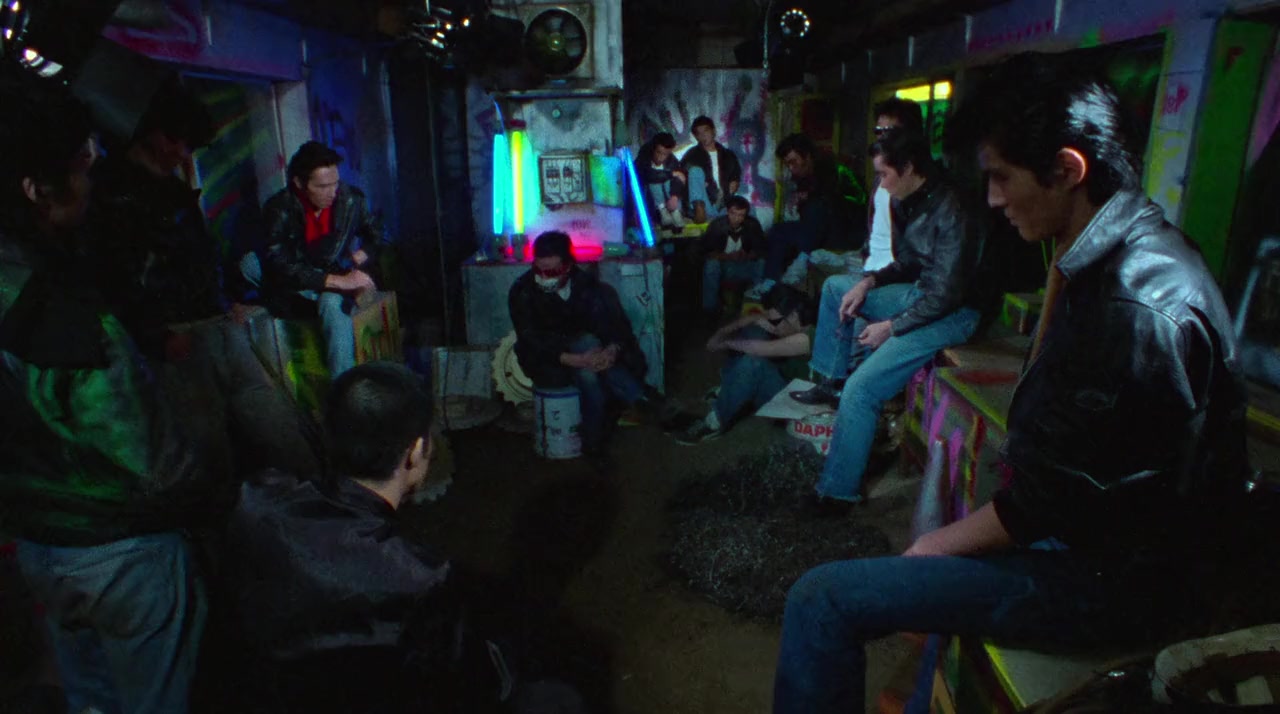 Yet the strength of Crazy Thunder Road is not the characterisations; mainly these are rough constructions and if I’ve dwelt on them, it’s because if Jin had been excessively selfish and just some jerk, it might have been a serious turn-off, and I easily turn off films that nark me. Instead, Ishii as director, co-editor and co-writer becomes the true star of the film. As the story opens, as its apocalyptically dressed bikers cascade across the screen, the film immediately crashes into you with its kinetic energy; to the point where it can be a disconcerting, disorientating experience as you piece together just what is happening to Jin’s world as it suddenly starts to collapse around him. This disorientation, you suspect, is intentional from Ishii, who even goes so far in one scene to have the camera pan round the characters, 360 degrees, panning faster and faster until everything becomes a blur, then nothing more than a series of abstract images as the camera spins so quickly; all that is left is dialogue. As a viewer our senses are battered, a bit like Jin throughout much of the film. This syncs with the swift cutting of the editing that really drives much of the early energy of the film. Slam in discombobulating camera angles and close-ups and (to paraphrase a reference to Tsukamoto’s Tetsuo: The Iron Man) it’s a massive sensory blitz. But it’s a coherent sensory blitz.

I ask myself if Ishii intended Crazy Thunder Road to be a prophetic film, but I like to think not. Instead, Crazy Thunder Road is really a directorial marker laid down to show what Ishii can do with next to nothing, through pure zeal, pulsing energy and continued invention. There's no small amount of borrowing from other texts, sometimes snuck in, such as the bikers turned police that seem a sly nod to A Clockwork Orange; yet it is also unafraid to really dig in and try and casually shock, introducing in the latter stages a child drug addict-dealer-provisioner of illegal goods, which is treated as completely morally bland, just another day in Jin’s journey from biker gang bliss to fighting off authoritarian control. And all of course to a thumping punk soundtrack; the music being integral to the energy the film projects. Yet Ishii is also capable of creating stylistic side bars; an early Ken-Noriko lover’s discussion is filmed in gentle soft-focus, in counterpoint to the jarring camera work of much of the rest of the film, and their conversation is spoken only in silent-picture intertitles. Such moments too provide respite from the concussive energy of the film, and changes of pace are often necessary, because energy upon energy is a bit like suspense built upon suspense; the audience needs a brief rest from them for the effect to be truly felt. This shows that the 23-year-old Ishii already knew his stuff and you have to hand it to him, to be able to make such an effective piece of cinema on such a budget is downright impressive, even if often you can see the lack of budget - but if anything this adds to the sense of a dystopic nightmare Japan. As does the choice of locations, frequently the bikers veer through industrial sprawl, similar to the collapsing buildings towards the end of Robocop. The film revels in enclosed, graffitied gang-bases and aging, decrepit urban wastelands, forgotten by whatever normal population may exist in this world, allowing the gangs take them over and make their own. Visually, the film is often brightly light, neon-drenched, though sometimes it is almost monochromatic as gangs duke it out in confined factory spaces.

You can imagine the influence of Crazy Thunder Road on later filmmakers, Tsukamoto being an obvious example, especially considering the equally micro-budgets of his first Tetsuo film and earlier Adventures of Electric Rod Boy; not to mention Shozin Fukui’s cyberpunk films (from the two I’ve ever been able to see); watching Crazy Thunder Road, it’s also hard not to believe that it didn’t influence Sion Sono’s Tokyo Tribe, another dynamic gang film that exists almost entirely within its own narrative.

I know this is the first release outside Japan, but what is fascinating for all that the film seems influential there seems to be little information available on it and most of it sketchy: several reviews seem even to confuse Jin and Ken, and you wonder if many were written based on recycled synopses. But now, thanks to Third Window Films, the world has the opportunity to experience the raw punk energy that is Crazy Thunder Road.