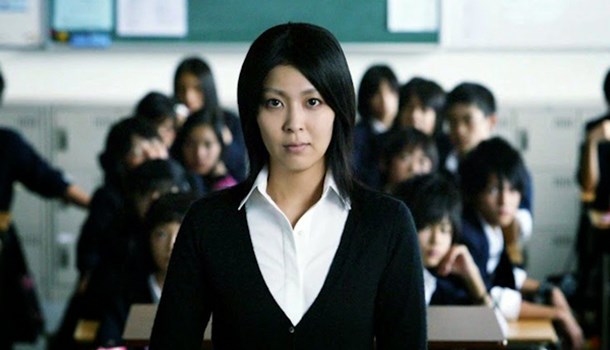 I’ve become quite a fan of Tetsuya Nakashima in recent years, starting with the absurd and vibrant coming-of-age drama Kamikaze Girls then moving on to the bittersweet tragi-comedy Memories of Matsuko. I was therefore convinced that I’d love his latest film, based on Kanae Minato’s debut novel; sure enough, love it I did...but for reasons that I never expected.

What is immediately apparent from the opening credits is that, in terms of both content and style, Confessions is very different from those two earlier works that international fans of Nakashima are familiar with. There is none of the bright colour, off-beat humour or presence of eccentric characters; it’s instead a coolly sophisticated and occasionally shocking psychological thriller with impeccably-timed plot twists and barbed social commentary.

Following the tragic death of her young daughter, junior high school teacher Yuko Moriguchi announces her resignation to her unruly class. That in itself is not particularly surprising, but before she leaves Yuko announces that her daughter’s death was not accidental. She believes that the girl was murdered by two members of her own class and Yuko intends to make them understand the severity of their actions. What follows is the story behind a tragic death, its aftermath and the revenge of a distraught mother, told from multiple viewpoints of people involved.

Confessions is an undeniably dark film; a fact that is reflected in the muted colours of the cinematography. For a movie that is so bleak in terms of themes and camera work, Nakashima has gone out of his way to ensure it remains gripping from the first scene to the last. A technique he uses over and over again is that of slow-motion shots that highlight every nuance to the arrangement of a scene and characters’ body language. This may sound like it would lose its impact after a while, but in the context of this film it’s consistently effective in drawing attention to the tiniest details and encouraging the viewer to think carefully about the events that are being portrayed. It also highlights the care and attention lavished on the visuals, which look particularly stunning in the Blu-Ray format.

The social commentary angle of Confessions is always there in the background, but isn’t placed so far into the fore that it gets in the way of the other things that the film is trying to accomplish. There are a couple of plot points that struck me as a little difficult to believe but they are delivered with such conviction, and woven so tightly into the twisted yarn of the overall storyline, that I was too absorbed in the film’s worldview for them to be a major issue. The only other potential problem with the film’s approach is that some may find it too cold and clinical in the way it presents the topics addressed, but for the most part the intelligent narrative, with its numerous twists and turns, is very compelling indeed.

‘Compelling’ is what springs to mind when trying to describe the performance of Takako Matsu as the vengeful Yuko. In some ways  her character is reminiscent of that of Lee Young Ae’s in Park Chan-wook’s Lady Vengeance: as a parent she is gentle, compassionate and beautiful but she is simultaneously pitiless and calculating when intent on punishing those responsible for destroying her life. As in Park’s film, it’s easy to understand why Yuko goes to such extreme lengths to settle the score but the tenacity she shows when doing so is as chilling as it is fascinating.

Matsu’s turn as the film’s protagonist is superb but the young supporting cast are also impressive, which is an important factor since so much of the film’s dramatic weight rests on their young shoulders. I’d like to think that this is the production that goes on to give the likes of Yukito Nishii, Ai Hashimoto and Kaoru Fujiwara even greater success; I'd like to think we're seeing the beginnings of some new rising stars here.

The soundtrack is also outstanding and contributes much to the film’s all-pervading feelings of tension and unease. Two contributors worthy of note here are Radiohead (an outfit who I think need no introduction) and Boris, a Japanese band who may not be as well-known internationally but are similarly experimental and difficult to categorise. As with all the non-original contributing tracks (some of which are very eclectic indeed), they complement Toyohiko Kanahashi’s brooding, ambient score wonderfully.

I’m reluctant to recommend Confessions based on what you may have seen of Nakashima’s previous movies since he’s taken a completely different direction here, using unusual cinematic techniques and exploring different subject matter. It’s no worse for that though; in fact I’d say that it’s his best piece of work so far and stands as one of the finest films of its type to emerge from Japan’s film industry in recent years.