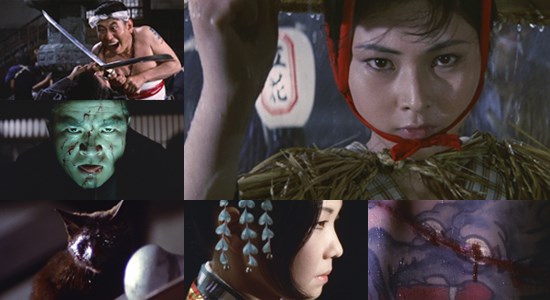 Akemi Tachibana is the leader of the dragon tattooed Tachibana Yakuza clan and, at the beginning of the film, is hell-bent on taking out the boss of a rival gang. Having accomplished her task and wounded the the boss’ younger sister in the process, a black cat turns up and begins enthusiastically lapping up all the spilt blood. Unsurprisingly, this last part is a recurring dream Akemi has been having whilst serving time for the aforementioned murder. On her release she once again takes up the reigns of her familial Yakuza group, but things are not quite as they were - there is a traitor among her men who wants to engineer a war with a rival gang to take both groups down and seize power for himself and a third party. Akemi doesn’t fall for this though and refuses a wholesale war - that is, until someone starts taking out her foot soldiers and friends! There’s also a new, blind girl in town who is herself a skilled fighter - who or what is she really fighting for though?

There’s quite a lot going on in Blind Woman’s Curse and not all of it always makes sense. Although traditionally yakuza movies can have quite simple plots - A wants B’s territory/girl/social standing and is prepared to go to great lengths to get it - Blind Woman’s Curse is definitely among the more complex of these films. In no particular order the elements of the ‘plot’ include Akemi and her responsibility towards her soldiers versus her guilt about the various things being a yakuza boss entails, the blind swordswoman and evil looking black cat with a taste for blood, not to mention her deformed hunchbacked henchman(!), a random would-be gangster who dresses in Western clothes apart from his bright red loincloth and a serial killing gangster who likes removing the tattoos from his victims. Oh, there’s also a subplot about a nice yakuza and the ex-gangster boss of a popular restaurant that all the other yakuza seem to like to frequent. It’s quite pointless trying to piece all of this together into something that’s totally coherent, but to be honest that’s all part of the fun. It’s all very strange and confusing but if you just let yourself go with it and embrace the madness it’s all the more enjoyable.

Teruo Ishii went on to gather ‘acclaim’ for films with such enticing titles as Shogun’s Joy of Torture (the first in a series of films entitled The Joy of Torture) and Horrors of the Malformed Men, so Blind Woman’s Curse is actually a fairly restrained effort from Japan’s king of cult. Made for Nikkatsu just before they moved exclusively into the Roman Porno line, the film does have its fair share of ‘artistic’ bared flesh and salacious content, albeit not to the extent of some other films from this period. Ishii allows the various bizarre incidents to mingle freely in an over-the-top, theatrical atmosphere which is quite forgiving to its overall lack of consistency. Nothing in this film should work, but it does and has a fine old time doing so.

Blind Woman’s Curse also marks the first leading role for Meiko Kaji, who would go on to become a cultural icon in the following decades. Best known for her role in the Lady Snowblood, Female Prisoner Scorpion and Stray Cat Rock series of films, Kaji is one of the superstars of late Sixties counter-culture. She doesn’t really have that big of a role here despite being the lead (though the English title distorts this somewhat by putting The Blind Woman into the title), but her already assured performance helps give this totally crazy film some sort of grounding. She’s ably assisted by a strong supporting cast who know exactly what sort of film it is they’re in.

A lowbrow cult classic, Blind Woman’s Curse may be swimming at the shallow end but it’s having more fun than some of its deep sea diving cousins. Infinitely strange, confusing and over-the-top, it doesn’t make very much sense but manages to make not making much sense work for it. Not quite as good as some of the more famous exploitation films of the period (many of them also starring Kaji), Blind Woman’s Curse has been neglected until recently but once again Arrow Films have come to the rescue and returned it to its rightful place, as they’re shortly to do for the Stray Cat Rock films. Not for those who prefer a clearly defined narrative, Blind Woman’s Curse is an excellent dose of nonsensical fun which is far more enjoyable than it has any right to be.