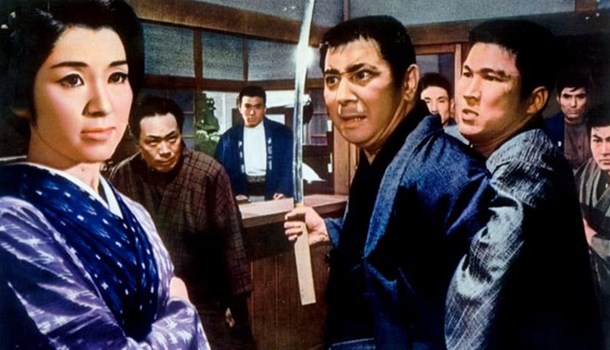 Big Time Gambling Boss (1968 - dir. Kosaku Yamashita) is the first Japanese film from the new Radiance Films label, so I went fishing and caught a review copy. Why not? As Radiance proudly declare, it is a film feted by both Yukio Mishima and Paul Schrader, so what else could I do but see if it could live up to the assertion by Mishima that the film a masterpiece?

Spoiler: it was pretty damn good.

Yakuza clan boss Arakawa collapses and so, having had a stroke leaving him nearly paralysed, a new clan boss must be named. Nakai (Koji Tsuruta) is proposed to lead the clan but his honourable following of the code will not allow him to accept. No, his sworn-brother Matsuda (Tomisaburo Wakayama) must be named the new boss. Except Matsuda is in jail and only Nakai believes it should be so. Instead, Arakawa’s son-in-law, Ishido, is elevated to Boss though junior to both Nakai and Matsuda.

The first moments of Big Time Gambling Boss seem like many yakuza movies of the 1960's, though there is immediately a directness of storytelling that suggests not a moment of the film is going to be wasted; it’s also setting up elements of the story we don’t immediately recognise – this is all to the good. Then the film begins to unfold and it’s not unfair to say that the plot is close to pure boilerplate throughout; there is nothing new here in terms of what narratively happens, but wait, as the film was finishing it reminded me of watching John Cassavetes's Killing of A Chinese Bookie only a few weeks before in that the plot, when written out beat for beat, is like so many others but the execution, the performances, how the film resonates, allows it to stand apart.

Not that Big Time Gambling Boss is an independent film like Cassavetes', this is a Toei production but it has something unusual to it that becomes apparent without you ever quite realising it. If there is a magic to Big Time Gambling Boss this is it: though much of what occurs in the story is expected, the character arcs have an inevitability to them that is no different to many similar stories that place honourable yakuza as modern samurai, but its impact is far greater.

Part of this is, I think, that the film has a detachment of sorts. Not that it is cold, but it never seems to make assumptions for us, instead it allows scenes to play out - it makes no moral judgements instead allowing us to introduce our own, for characters to unfurl and for us to make decisions based upon what we see. And what we see is a tragedy, one all the more powerful for how the film never tries to goad us into great emotional intensity. Instead, it allows us to interpret what we see on screen: the power games, the emotional experiences that power the characters; all of these are more impactful for how they are presented. There is also a remorseless focus on the characters, and you feel the film really delves deeply and unusually effectively into a certain type of male yakuza psyche. So that as we watch the film you feel Big Time Gambling Boss really gets under the skin of what it means to be a yakuza and not in the melodramatic sense but as a decision that entirely alters the course of your life. More importantly perhaps, Big Time Gambling Boss doesn’t just consider what it means to be yakuza in isolation but in the wider context of our protagonists' emotional lives and that of those around them. 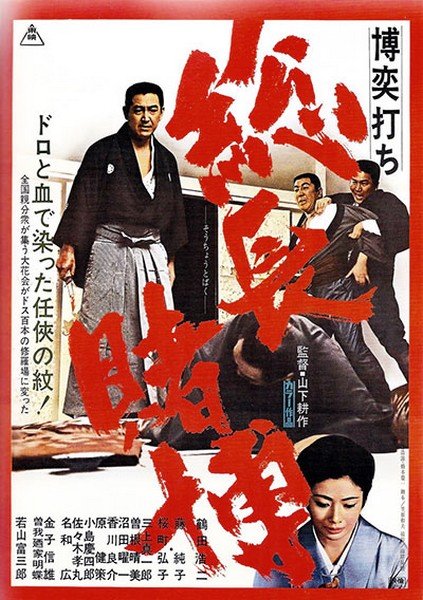 It is this entwining of the emotional tethers between the characters that allows even us, an outsider to their yakuza world – honourable or otherwise – to connect to the codes of honour of our characters and to their emotional attachments even if we do not fully understand, or even agree with them. One thing I always consider any fiction needs is internal verisimilitude; in the context of what we are reading or watching no matter how alien to us, it has to have its own logic and if so then we can accept it and Big Time Gambling Boss has this quality. The world it creates feels real, and this is displayed most efficaciously in all the character relationships that the film manages to evince with apparent ease. How Nakai has looked after Matsuda’s wife and those yakuza who followed him, feels deeply etched with emotion. There is too a deep criticism of masculinity, but this is never overplayed because the film never forgets that the characters, as they may throw off aspects of their other lives, are not just one dimensional beings who suddenly care nothing for what they have discarded or have lost, no, they feel it intensely and yet as an audience we are invited to see the pointlessness of much of their lives, especially when sometimes characters are given the chance to escape but don’t, instead clinging onto what they know, their code, rather than perhaps taking a more terrifying path: one of normalcy. Yet to say their lives are pointless would be a disservice because Big Time Gambling Boss never seems to pitch any of its characters as being throwaway. If anything, almost every side character seems far too human for the film, making the more tragic elements of the story more deeply felt.

For all the intrigue present to us throughout the narrative, the film pivots on its numerous relationships, which feel quietly real. The film’s core is understandably the relationship between Nakai and Matsuda. There are two terrific and charismatic performances here, that make you feel these sworn-brothers are just that. It’s not just a term, but a real living breathing bond between them, if one at risk as always by their yakuza code. Watching Koji Tsuruta as Nakai I had a similar feeling to that of watching Takeshi Kitano in Hana-Bi, where the slightest facial expression suggests the terrible emotions running under the surface, forever kept in check but so very strongly felt; Tomisaburo Wakayama gives a more powerfully demonstrative performance as the passionately indignant Matuda, but it’s a dramatic performance, and the scenes he shares with Tsuruta  as Nakai allow you to really feel their bond. Yet the characters that circle them like satellites also have a greater sense of humanity and realness to them than you might expect. Ishido, the new clan boss, elevated from his more junior position, you expect to be some weakling yet is allowed greater space to become a fleshed-out person. Equally, Hiroko Sakuramachi, as Nakai’s wife, though given little screen time, hits harder than expected, again, inhabiting a character that takes you subtly by surprise in how she relates to Nakai as her husband and also as a yakuza, and in ways you rarely see on screen. Often the minor characters in Big Time Gambling Boss work because the film is forever looking for the humanity within their actions not just the impact as narrative beats.

So, is Big Time Gambling Boss a masterpiece? Honestly, after watching it once it’s impossible to say; to recognise a film as a masterpiece requires time (and I for one am new to it) but it’s a film that is rich, rich in inevitable tragedy (in the best possible sense) and in many small surprises, so that as you watch it you feel you need to see it again to fully appreciate them. Maybe that’s right, maybe it’s wrong, but if nothing else Big Time Gambling Boss definitely stands apart. The first minute or two left me wondering if it would be all that different from similar genre films but very soon I found myself realising something unusual was going on, the tone of the film, the performances, the expected narrative beats appearing yet somehow impacting in a more powerful way; the side characters who exist as richer, more real people than you have any reason to expect; an accretion of difference was building up.

Ultimately Big Time Gambling Boss feels like one of those films where everything magically falls into place, where the craft of cinema all slot together. It's also worth noting for what many are calling a bit of a forgotten film, Radiance's HD transfer of the film looks excellent. Based on the quality of Radiance's first Japanese release - they have teased more to come - this bodes very well for future films. I, for one, am very interested, though Big Time Gambling Boss is setting the bar high from the start.