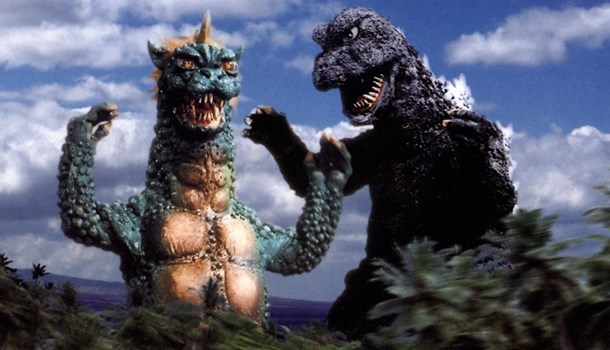 All Monsters Attack (1969) immediately decides to do it differently. The credits are surprisingly short and even have an accompanying pop song. Visually, it’s all built out of images taken from previous kaiju films. It is absolute cost cutting and an indicator of what’s to come. It’s also a kid’s film and you realise this immediately because of the sudden influx of young primary school kids on the screen. But what really caught my eye – and maybe it is being a city dweller who loves concrete and urban more than nature - was how the images were all curiously raw industrial: pluming smokestacks and grim, gaunt, giant factories. The pure griminess of it is unusually honest. I loved it. It seemed completely in counterpoint to the previous film's sci-fi trappings. It’s an aside but I love these images of places that are out of sync with the usual representation of cities, where normally you get all the sights, the scenes, the obvious images to signify specificity, this is a place no person would want to admit to living as it’s not clean and nice, but where many do live and work – it’s not pretty but it’s life.

Ichiro, a kid whose parents both work long hours to make ends meet, is left to his own devices after school and is bullied by the local kids, the worst of whom is Gabara. Admitting to a neighbour and toymaker that he wants to go to Monster Island, Ichiro escapes into fantasy where he finds himself on Monster Island, is befriended by Minilla, himself bullied by the larger monster, Gabara. Meanwhile, back in reality there are thieves on the loose with 50 million yen and in need of a getaway car to escape with their ill-gotten loot…

Could these thieves and Ichiro’s life become intertwined? Could Minilla fight back and show Ichiro how to stand up for himself? Of course. There’s no giving away the plot here because you know exactly what is going to happen over the 70 minutes of All Monsters Attack.

The film fits into the pantheon of "the child disconnected from their parents and taking refuge in their imagination" movies. So of course you compare it to the exemplar, Curse of the Cat People (really, if you don't believe me watch it, it’s the best film about childhood alienation you can hope to see), and while All Monsters Attack cannot touch that film, it nevertheless feels suffused with real sincerity. You feel that director Ishiro Honda genuinely cares about making this film, despite being a very throwaway picture. You do wonder if, as a child, he had similar experiences. The sincerity allows you to forgive the film being utter hokey nonsense. Yet there is also something refreshing about the straightforwardness of the story and characters after the narrative convolutions of films like Destroy All Monsters. And as always, Honda does all he possibly can with what very limited means he has available, whether that is the transitions to Ichiro’s imagination where he mixes negative photography creating a psychedelic shift between the imagined realm and reality, or just Honda’s sustained ability to know where to put the camera; again Honda’s presence behind the camera means he draws all he can from the meagre source material. Even towards the end, with the two criminals - boo-hiss! - searching through a broken down old building, it's beautifully filmed and wouldn’t be out of place in a decent yakuza movie.

That said, much of the film is just an excuse to venture into Ichiro’s bizarre imagination and reuse footage of previous monster fights, including all the rock kicking nonsense from Ebhirah, Horror of the Deep. It’s not all reuse though and there is some new effects footage, because the kaiju-Gabara needs to menace and fight Minilla. It’s all rather shoddily done though and kaiju-Gabara seems stiff as a board. But arguably the worst thing is Minilla, who appears in two guises: one is Ichiro sized and has an ineffectual mechanical mouth (and even talks); the other is the normal sized Minilla. Honda, who it seems also directed the effects, does have some fun making the transition between the two Minilla monsters and making it work. But most of the scenes in Ichiro’s fantasy are just Ichiro or Ichiro and Minilla cheering monster fights from within some bushes – and cut to reused footage. This is where the film is at its weakest, rather than in the real world where it has more fun, and more sustained sincerity. The film does seem to be all about having fun, and there’s something to be said for that. Also many of the performances by the adults have an easy way about them and the film refuses to ever patronise the young Ichiro.

Though a far cry from the original Godzilla, short at 70 minutes and clearly aimed at kids, All Monsters Attack nevertheless has more care and attention paid to it than it has any right to. Even at the end with the criminals chasing young Ichiro, Honda’s attention to the scene and the design is better than you could dream of, so I felt an enormous amount of goodwill to the film as the end credits rolled. It’s no classic by any means, but considering the question that ended my previous review, "where on earth could the series go from here?" , well I think as a change of pace All Monsters Attack is probably the right choice. Yes, it is a rushed school holiday cash-grab of a film but so what? For all the rehashing of footage and average child acting, it’s a film that is unexpectedly well made and unashamedly sincere. It’s all on the cheap but many of the original elements have such effort put into them, excluding the stiff kaiju-Gabara, that it reinforces another statement from an earlier review: Ishiro Honda, we are not worthy.

Hiding in the bushes, watching the kaiju action - and learning to fight the real Gabara, oh and an excuse to reuse a shed load of old footage

6
Kid’s kaiju fun, with more reused fight footage than you can throw a boulder at, but it is sincere in its examination of childhood alienation… even if Minilla is a pain in the arse
LATEST REVIEWS