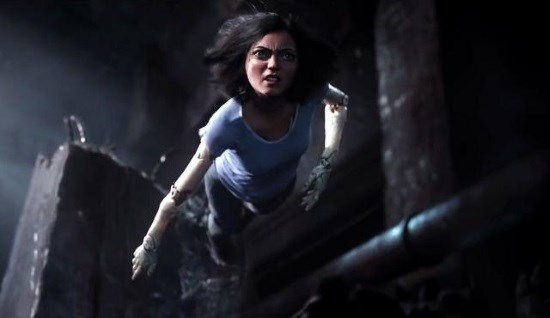 So, setting aside the film for a moment. Hollywood. Mr Cameron. Mr Rodriguez. Its Battle Angel Alita. Or Gunnm. That’s been the title for longer than you’ve been developing this film. Soooo….What gives? Your title even makes less sense than the original!

So far as live-action anime adaptations go, Alita is probably the longest running and most famous given James Cameron’s acquisition of the rights sixteen years ago. Over the years, there was a constant stream of promises that it would be his next film, simoultaneously being bumped by other projects, most notably the Avatar franchise. Now Robert Rodriguez has finally pried the script away from Mr Cameron and made the film himself for 20th...er that is, 26th Century Fox.

Whilst digging through the colossal junk heap cast down from the sky city of Zalem, doctor-cum-bounty hunter Ido (Christoph Waltz) happens upon the upper torso of a young female cyborg. Discovering that her brain is still alive he restores her to full function. As she has near total amnesia Ido christens her Alita (played by Rosa Salazar) and teaches her to be better than the world she finds herself in. Pushing her in a more chaotic direction is Alita’s would-be beau Hugo (Keean Johnson) who teaches her the seedier aspects of the Scrapyard, including the deadly and dangerous sport of Motorball (think roller-derby on crack, speed and just about every other drug you can put a name to). Alita has not arrived unnoticed though and she is being watched from Zalem by forces that know more of her past than she does - forces who will do anything to stop her as she begins to uncover her past.

So, the bad first. The film is rushed. I mean really rushed – its two hours long and there’s rarely a pause for breath as it races to get through roughly the first four volumes of the manga. This means that some things sadly don’t quite click as much as they should, so the humour falls a bit flat most of the time and the relationships between the characters never really pop as they should. There are also gaps and jumps which strongly suggest there was considerably more plot going on before the editors got involved. Johnson’s Hugo is bland and one dimensional as the romantic lead too, which damages the overall movie. Whilst there is genuine chemistry going on with Salazar in the lead things are hampered by an incredibly generic and predictable arc for the character.

Other than that? Yeah, this film is pretty great, standing as further proof that Hollywood can do a really good job with adaptations of Japanese works when it tries. The action is really good fun and manages to pace itself in such a way that its both thrilling to watch and still capable of switching to the slow-motion shots that resemble splash pages from the manga, without ever feeling out of place or detracting from the action.

Rosa Salazar’s Alita proves to be a genuinely lovable character with a huge amount of emotion behind her performance, particularly in her scenes with Christoph Waltz’s Ido which are often quite touching – in fact you kind of wish they’d have sidelined the Hugo storyline in order to focus on this relationship instead.

Alita is the make-or-break character for the film. As a fully CGI, motion captured character, it was important for the audience to buy into her. Certainly people weren’t impressed when the early trailer hit, with what can only be assumed to be unfinished effects and enormous eyes! However, set your worries aside because Alita is probably the most incredible CGI creation you’ll have ever seen and probably the most impressive use of visual effects since the Lord of the Rings. Despite the enlarged eyes and all the other enhancements, Alita proves to be utterly photo-real with no sign of the uncanny valley issues aside from a few shots in the motorball sequences. She is a spectacular creation and one can only hope that the film is still remembered by the time the next award season swings around so the film can clean up the visual effects awards.

This is definitely a film you should see. It's brilliant fun and, Hugo aside, is a near-perfect adaptation of the material for the big screen. Unfortunately it’s also a film that’s really going to need your support given that early indications that the box office takings are not good, although this can probably be blamed on the studio making the moronic decision to release it the same weekend as the cash-sucking goliath that is the Lego Movie 2...

8
This IS the film you were hoping for!