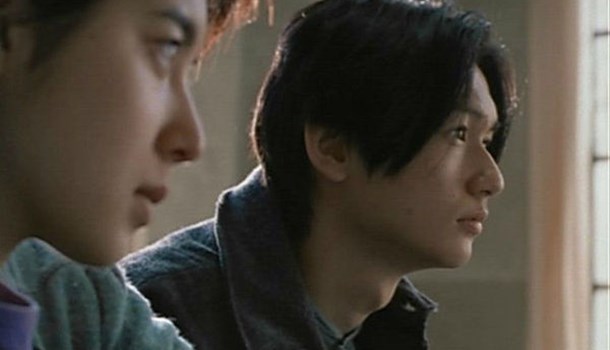 In a plainly decorated, run-down building in a vague region between the realms of the living and the dead, a hard-working group of people carry out a vital service for those who are making the final journey to The Other Side. The newly-dead souls have just three days’ worth of interviews and personal reflection to choose one memory from their lives that will be recreated and played back to them so they can relive that one moment for all eternity.

A theme I see coming back time and time again as I watch the films of Hirokazu Kore-Eda is that of a simple and/or strange premise, and his uncanny ability to draw out profound meaning and almost overwhelming levels of heartfelt emotion from that premise in a way that is seemingly effortless.  After Life (originally titled Wonderful Life domestically) takes its straightforward setup and shows us a cross-section of human experience in today’s world, featuring a wide range of life experiences from directionless adolescents to regretful middle-aged people and the wistful elderly.

A waystation for the deceased may sound like a religious or morbid affair, but due to the matter-of-fact and everyday portrayal of events its spiritual leanings are very vague, and no particular belief system is hinted at very strongly. For all its talk of death and ascent to Heaven, After Life is very much a story about life itself and the things that really matter to people most. In many cases the memories selected are quite simple ones, which offer some poignant moments as the roll-call of newly-deads decide what made them most happy and fulfilled during their lifetimes.

Of course, this decision is not necessarily an easy one. Some, especially the younger ones, have such limited life experience that they are unsure; some older ones require coaching and counselling to draw out the happy memories scattered within long lives that were full of hardship and heartbreak. Apparently some of the minor characters’ segments were improvised remininiscences of the actors’ own lives, which heightens the realism and "documentary" feel of the production. The main cast is a strong one though, featuring the likes of Susumu Terajima and Arata Iura, and the performances are without exception heartfelt and believable.

The film concentrates on a small number of the interview segments; particularly those that strike a chord with the ‘social workers’ who are in charge of documenting and organising the recreation of the memories. I won’t spoil things by explaining the details, but one of the "clients" causes two of them to re-evaluate their work and even explains a little of why they’re doing the job that they do. It breaks up the fly-on-the-wall interview format, as well as providing some narrative structure throughout the duration of the film.

The ramshackle setting, the benevolent bureaucracy that processes the dead souls, the low-tech and improvised methods used to recreate the memories and the small cinema room used to play the memories back to their deceased audience are quaint and charming, but also suggest that this was made on a low-budget (a suspicion that’s reflected in the lacklustre video transfer of this particular release). Not that an array of flashy special effects would improve what is already an outstanding film anyway; it would I think make an effortless transition from the cinema to the stage with few changes to the script or setting.

The little quirks, minor flourishes of the metaphysical, along with the emphasis on trivial events and understated emotion, reminded me a lot of the works of Haruki Murakami; as mindful as I am of his legendary status as a storyteller, I don’t feel afraid to mention Kore-Eda’s name in the same sentence.

Perhaps there’s a cultural difference at work here in that individual societies often have different philosophies in regards to life and death, but I personally found it very refreshing to see a film approach this subject matter in a way that doesn’t dwell on the finality of the characters’ respective situations. By which I mean: for a film that features dead people, it’s very much a story about life.

9
As humble and low-key as it is, After Life is a deeply affecting character study that takes a premise that’s as downbeat and ‘final’ as they come, but turns that sad event into something life-affirming and full of hope.
LATEST REVIEWS
Daimajin Collection