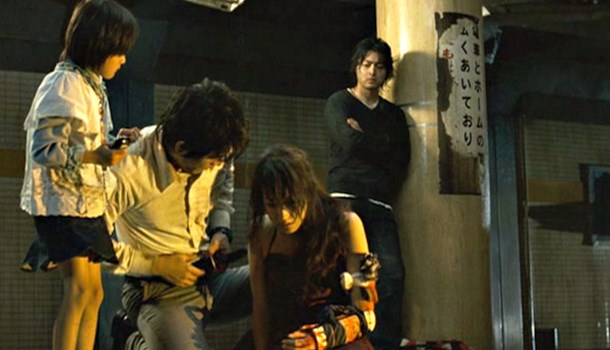 A mega-typhoon bringing devastating winds, destructive hailstorms and torrential rain hits Tokyo, and the helpless victims who escape the resulting floods find themselves trapped under the rubble of a ruined city. Their only ray of hope is the heroism and tenacity of the emergency services, who are led to the unmistakeable distress call of "252": the recognised signal that there are survivors in need of rescue...

To be perfectly honest, 252: Sign of Life walks very well-trodden ground and as a result is an easily-recognisable brand of disaster movie blockbuster. Things don’t bode well when the first tidal wave roars over Odaiba, because it’s so clearly rendered using the artificial-looking CG we’d expect from certain SyFy channel offerings and other movies whose budgets can’t cover their lofty ambitions. Fortunately the special effects do improve later on so by the time Ginza is pummelled by hailstones and Shinbashi station is awash with floodwater it starts to look chillingly convincing.

After this, the film goes into familiar territory as it rolls out the clichés and lays on the melodrama with a trowel. This aspect is definitely one of those ‘your mileage may vary’ cases, because subtlety is one thing that 252: Sign of Life doesn’t seem to recognise... which is both its greatest strength and its greatest weakness at the same time.

It’s almost as though the film was written with a checklist pinned up nearby to ensure none of the obvious plot devices and tropes are left out: the premise of a family split up – resulting in the father becoming the hero of the piece to rescue his daughter and be reunited with his wife – is an obvious one, and sure enough that’s exactly what happens (and you could guess the outcome without me having to spell it out for you). Add to this the fact that the daughter is even more vulnerable and in need of rescue because she’s deaf and unable to speak and you end up with a movie that has no intention of doing things by halves.

In some ways, this approach is really rather manipulative because it pulls the viewer’s heartstrings and shamelessly wrings as much drama out of any given scene as possible... despite the presence of some established names, the acting skills of its cast are nothing to write home about either. That said, Ayane Omori’s performance as the young girl is a stand-out, and one of her character’s defining features is her lack of dialogue!

As easy as it is to make fun of the film’s numerous shortcomings, I feel as though I ought to give it a bonus point or two for effort. Despite my cynical mind’s best efforts to highlight how the acting is overdone, the plot progressions too convenient and the drama forced to within an inch of its life, it did manage to hold my interest and I often found myself on the edge of my seat and wanting the hapless victims to be rescued... although I felt annoyed at myself for letting its clumsy magic work on me. Perhaps it’s a guilty pleasure in that sense.

In terms of being a candidate for a night in when you want to simply pour yourself a glass of something cold, get a takeaway or pizza and not think too hard, you could do far worse. Perhaps the easiest way to decide whether or not 252 is up your alley is to ask yourself “do I enjoy Roland Emmerich-style disaster movies?” If that’s the case, switch off your brain and enjoy. Otherwise, don’t waste your time.

5
A melodramatic and derivative effort among many others, but it at least does what it sets out to do while looking visually impressive.
LATEST REVIEWS