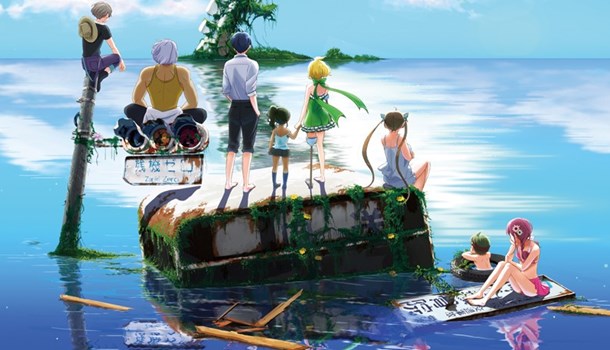 Wouldst thou compare a summer day to a winter night? While I don’t wish to compare this game to other titles by Spike Chunsoft, at first glance the setting and story reminded me a little too much of Danganronpa 2. Awaking on a city ruins tropical beach, surrounded by a diverse set of strangers who also don’t recall how they got there, you are dragged to a static retro television screen with two uncanny comic relief mascot characters Mirai and Sho telling you that you are the last survivors of humanity and give you continuous updates and instructions. Sound familiar?

Although I was worried the premise of the game would be too similar to Danganronpa, things quickly take a satisfying and intriguing turn through the game's prologue, which might I add took me a whole hour to complete! As you progress through the story setup and are introduced to different game mechanics, it’s apparent that this game definitely takes elements from (and goes beyond) a simple visual novel dungeon crawler to a dynamic and in-depth story driven survival game.

One of the first tasks you are given is to construct a toilet. This is a cleverly made tutorial to encourage you to explore the island, introduce the control scheme and get to know the diverse cast of characters who will later become your party members. You are also presented with the core mechanical tasks; you must monitor your water intake, food, mental health, collect supplies and take bathroom breaks often if you don’t want to leave any questionable puddles on your travels.

As a Danganronpa veteran, there is a familiar free-roaming aspect I have come to associate with Spike’s previous games, but this time you are on a tiled grid. While, initially, it can be quite fiddly to get your bearings and navigating effectively, it is an interesting visual change which soon becomes a bit more apparent later in the game when you experience the grid based real-time combat. When you have a party, it is a traditional dungeon crawler feeling with a first person perspective, but the dynamic combat is seamlessly integrated, rather than clunkier turn-based random encounters. This change may also be a bit jarring for people who expect the map system to be more like the Danganronpa games, but for me it quickly turned into an arbitrary yet somehow deeply satisfying ‘fill-in-all-the-tiles-of-the-map’ side quest!

What really sets this game apart from others is it's unique generational life and death system. As the plot develops, you soon discover that everyone on the island is a clone, a revelation made apparent by their metal ‘x’ shaped belly buttons. This makes for a unique, yet compelling game mechanic where each character, including yourself, not only has all of these personal hindrances such as their food needs and weight capacity but every character (except one, mysteriously) ages rapidly towards their inevitable death on the 13th day of their life!

Your party has these thirteen days, in which they can ‘live’ progressively aging towards the end of this timeline. Not only does this affect your character stats through their different life stages, Being old will make you weaker, but it also means you have to and are almost encouraged to kill characters and allow your party to die. If you are to kill off a member of your team they can, and must, be ‘reborn’ as a child with a stat boost, depending on how your character died (meaning you gotta be creative with how you kill off your crew!).

While it can be quite satisfying to kill off your cast members, you are given a credit style score system dictating how many times you can revive your teammates, something that can only be earned from killing enemies or hunting. This incentivises you to progress through the dungeons and by doing so, the story. As you progress through floors of dungeons, time will progress forcing you to keep tabs on how many days left your party members will have left to live to keep you under pressure.

The aging mechanic also creates different storytelling dialogue depending on where people’s life cycles are at the time, making each person's interaction to the game slightly unique and encouraging you to revisit areas when your characters are in certain stages of their physical life.

The visuals of this game are surprisingly stunning, featuring 3D models that seem to still give the same appeal of 2D character icons often used in visual novels, cleverly animated to mimic the 2D format. The environments feel compelling, the beaches are bright and relaxing contrasting the dark and atmospheric dungeon segments where even seeing a room with brightly lit window feels like a treat. The use of 2D scenes in the game are usually a clever storytelling method, showing a contrast in visual style for more prominent moments. While I am not one to personally be squeamish of horror content, I must say that the initial shock value of this game’s darker moments made Danganronpa seem like a family friendly horror in comparison and should be avoided if you are not one for more shocking or gruesome visuals.

The western release of this game does have some censorship due to the younger character forms, removing some of the more ‘controversial’ imagery, but keeping the core dialogue and story development there - it's just used at different times in the character’s life cycles. After looking into the changes, it’s clear that it’s more to do with perception of the game rather than the reality of the actual content that has been changed or removed, though this is of course a subjective take. However, I believe overall this is a very close adaptation to the original Japanese version with great english and original japanese voice acting with only minimal cultural localisation letting you know you are playing an Americanised game. Outside of these references however, the translation is a high quality affair which flows well.

It is incredibly difficult to write this review with as few spoilers as I can, as I am a firm believer that this is the type of game you should go into as blind as possible. From my own gaming history, I would say this game feels like a hybrid of the Shin Megami Tensei/Persona games, with a Danganronpa-esque scenery, character cast and atmosphere. This experience brings about the mystery and thriller story elements of the Danganronpa games with a diverse and complex party based dungeon crawling mechanic and management system I’ve come to associate with Persona and satisfies my personal itch for a more truthful rendition of a modern dungeon crawler.

If you are a fan of either series, or just maybe want a more something a bit more in-depth than a standard visual novel experience this could be the thing for you. Just be willing to really dedicate time to it as I have spent around five hours or so on it so far, and still feel like I’ve only scratched the surface.

9
An outstanding effort from the team behind Danganronpa with the slight censorship controversies failing to overshadow an outstanding story.
LATEST REVIEWS
13 Sentinels: Aegis Rim (Switch)