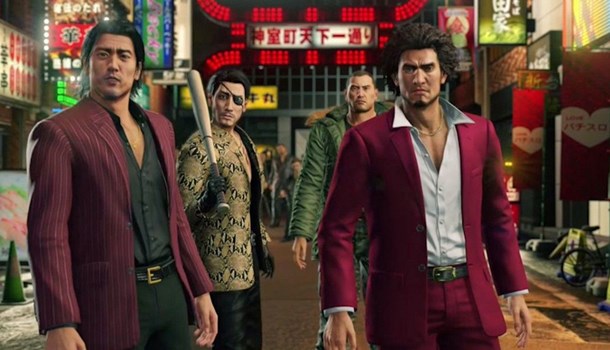 And to think we all thought it was just an April fools joke. Certainly it was staged as such when the team behind the brilliant Yakuza series announced on that the 7th main title in the series, the first to feature a new lead taking over (at least for now) from Kiryu Kazuma, would be swapping out brawling for turn-based combat. As it turns out they were certainly not kidding and brought us Yakuza 7: Like a Dragon, fully transforming the series into a JRPG! Clearly there are risks here and the term ‘alienating your audience’ is floating around in the background somewhere, but one has to laud them for taking such a gamble if nothing else!

Ichiban Kasuga is, like many prospective Yakuza, from a poor background. The son of a prostitute and a random John, he was raised in the Soapland where he was abandoned. He turned to a life of crime pretty quickly, and the fates shined upon him when he found a Yakuza captain he could dedicate himself to. In fact Ichiban is so dedicated that, like Kiryu before him, Ichiban willingly takes the fall for a murder committed by someone else. Upon his release 19 years later, he finds the world of the Yakuza is very much changed. The Tojo clan is all but gone, and after a few run-ins he finds himself homeless on the streets of Yokohama with no resources to speak of. And so he seeks out the usual goal of these games – revenge!

The plot is classic Yakuza and, as you’d expect, it goes classically off the rails at every possible turn as Ichiban and his new ‘party’ uncover all the craziness going on throughout Yokohama and Kamurocho. Despite fears to the contrary Ichiban is a great new lead, trading Kiryu’s stoicism for full-on enthusiasm as he gleefully dives in head first into everything that comes his way dragging and his new friends along with him.

But what you really want to know about is how the transition to turn-based combat has worked out right? Well, in an age where Square-Enix has spent over a decade trying to persuade people that turn-based combat is so last millennium and that their more real time system (which is as rubbish in this year’s FFVII Remake as it was when they first introduced it) is the way forward, and everyone else in the turn-based games business has just shrugged their shoulders and carried on as usual, it’s such a breath of fresh air to find out that Yakuza 7 has finally cracked how to modernise the combat!

On first glance it plays out exactly as you’d expect - everyone takes their turn via menus with special attacks, summons etc. and it all feels very intuitive and familiar. What makes things feel so incredibly different is the fact that time and location are now vital elements in how to make the battle system work for you. As a basic example, your attack knocks down one of the enemies, then you switch to the next characters turn. You now have a decision to make – do you try and attack that enemy as you’ll deal extra damage whilst they’re on the ground, go for a special attack, or attack someone else? Well, you’d better make up your mind quickly because they’ll get back up whilst you’re making your mind up and another enemy might move into the way which means they might counter you whilst you’re making your attack! You see both enemies and party members move around the battlefield in real time but they only attack and take actions on their own turn, meaning that there is a constantly changing variable of choice in your actions – attack now or wait and see if they group up to use that AOE attack? Perhaps they might move a bit closer to that bicycle which your character could then pick up and hit them with. A bit to the left and you might be able to knock them into the road or a street sign for more damage. These two variables feel like a huge game changer in the way that they’re implemented here and alongside making timed button presses part of all the the special abilities and part of blocking enemy attacks mean that you have to be constantly engaged in a way that isn’t normally a part of turn-based combat!

Complimenting the new combat mechanics is a classic job system, where each character can swap between jobs at certain points in the game. Of course this is a Yakuza game so no red mage, warrior etc here. Instead here comes the Idol, the Night Queen, the Chef and the Homeless to name but a few. Each job comes with a unique skill set, it’s own set of stat buffs/experience and it’s own set of weapons and outfits. They’re a lot of fun to play around with if only for the hugely varied set of animations and appearance combinations that are available (though we do wish that the characters reacted more to being assigned jobs which would be pretty funny - ‘why do I have to be the Night Queen Ichiban? Perhaps I should see how you like wearing the corset!’) though the fact that the roles are gender specific is perhaps a bit of a missed opportunity and occasionally a little sexist (at least two of the female job roles use handbags as weapons for example).

As if this weren’t enough this is very much still a Yakuza game at heart, which of course means wacky side stories and dozens of mini-games to play. The usual shogi, mah-jong and casino games are all present, as is the arcade (though disappointingly they haven’t added in any new games to the arcade…) are all present and accounted for this time accompanied by a mad game of riding a bicycle around an area collecting cans against the clock, a business simulator (yes fans, there IS a chicken!) and a full-on Mario Kart clone! Frankly we’re surprised that this all fits on one disc!

Honestly we could sing the praises of Yakuza 7 all day long and we haven’t even gotten to talking about the graphics (stunning and frankly better than most of the PS5/Series X launch games), the voice acting (spot-on), or the enemy design (utterly hilarious). Is there some room for improvement? Well, of course there are things that could do with a little tweak here and there – a few more cosmetic items and weapons would be good and it would be nice if Dragon Kart didn’t copy the bad bits of Mario Kart (i.e. rigging the races and making collisions slow only your kart down). We’d also like it if the game took back a bit more of the...sleaze I suppose… as for a game full of brothels, homeless camps, red light districts and drugs everything feels a bit clean. But these are would-be-nice-to-haves, and it’s human nature to always want a little bit more.

Whether this formula will work for more games or if the team will hasten the inevitable return of the Dragon of Dojima is certainly a question, but the quality of this instalment is unquestionable. Having thought long and hard there’s only one conclusion that can be drawn. This is the best JRPG ever made.

10
The crown jewel of JRPGs