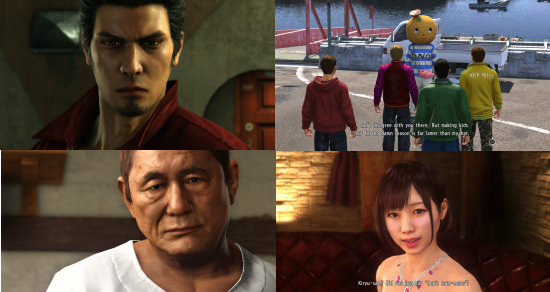 Yakuza 6: The Song of Life

The Yakuza series is arguably the best franchise Sega have ever produced [Ed: Oh reallly? ;)] and now a turning point has been reached in the franchise as popular lead Kiryu is set to be retired after one last adventure. Sega is on a mission to send him out with a bang and perhaps... a cry? At any rate, if nothing else the vicious gangs of Kamurocho are about to be royally disturbed as the Dragon of Dojima, Kiryu Kazuma is unleashed upon the city's crime families once again in Yakuza 6: The Song of Life.

Three years after the events of Yakuza 5, Kiryu has been released from his latest prison term (after which he still manages to look like the manliest man in all of videogamedom). As you might expect he walks straight into a sea of problems as he finds his adopted daughter in a coma following a hit and run which leaves him with a whole bunch of mysteries. Why was she attacked? What has she been doing for the past three years? And what is the story behind the bouncing baby boy she was found with? It’s a good thing Kiryu likes kids as he sets off to unleash chaos upon anyone who gets in his way!

The Yakuza franchise has always hung its hat on a solid two-pronged front. First make the story and its various characters as nutty as possible and secondly fill the game world with so many side activities that the player will end up spending hours on them before remembering what they were supposed to be doing. That holds true here too, but at the same time there's definitely a sense that the team haven't really brought their A game this time around.

A lot of the problem stems from the existence of Yakuza 0 which is a shining example of how this genre works at its best. As Yakuza 6 is the newer game, the expectation is that it will deliver more than ever before but instead the whole experience feels somewhat... smaller. Yakuza Kiwami had the same issue too but that got a pass given that it was a remake of the original game. Song of Life doesn’t really have that excuse.

Kamurocho, which has been almost as much a character in these games as Kiryu himself actually feels smaller even though it’s more explorable and more full of life than ever given the fact that construction workers block off large chunks of the city and it seems like there are far less in the way of mini games and side stories to play around with. The collectible keys and photos are also disappointing both because there doesn't seem to be all that many of them and because they’re intrinsically less interesting. I have fount that they are also less rewarding to collect than the phonecards of Yakuza 0 which at least had a use by unlocking things rather than the occasional piece of equipment to sell to the nearest pawn shop.

The second playable city of Onomichi is even worse and feels positively barren by comparison. Accurate perhaps for a rural Japanese city but not exactly thrilling to play around in with only around three actual mini-games to find by my reakoning.

Worst of all however is baby Haruto, who is just nightmarish because, well, he looks and acts just like a baby. [Ed: I think you just don't like children...] I'm not sure who thought that anyone would enjoy playing these sections of the game where Kiryu is restricted to a slow walk and heading out on thrilling missions like ‘find milk’ but they certainly don't do anything for the game (my suspicion is that someone on the development team recently had a child and wanted others to share in his suffering).

Even worse, the game's third chapter is borderline unplayable as Kiryu walks painfully slowly round a near deserted town forced to stop seemingly every few seconds to play an awful mini game to stop the baby crying. Something which, by the way, you can’t not hear thanks to the game deciding that the cry will come out of the speaker on the PS4 controller if you choose to mute the TV to avoid it (for the record we refused to play the mini game at all in protest though we still had to sit through the timer anyway to move along). This part of the game came very close causing me to launch the game disc sailing out the nearest window!

Also, in our opinion the game is desperately lacking in appearances by Majima, the franchises greatest character!

This would have been a real shame but fortunately, whilst the game isnt as good as Yakuza 0, it's still a really solid game for the most part. The cities are more alive than ever as Kiryu can now enter most shops and buildings seamlessly without requiring to load new areas and can climb ladders and leap from the top of buildings.

The new streamlined combat is fluid and the experience and upgrade systems are better than ever as they allow Kiryu to wreak havoc upon the many, many foes he encounters without it ever feeling repetitive. It is of course, as awesome a feeling as always to watch Kiryu wade in amongst 30 enemies single-handedly and smash them to pieces with bare-fists, bikes and giant novelty traffic cones. Hack and Slash fighting games like God of War can only wish that their combat could be half this much fun!

The characters you meet throughout are as dynamic and fun as ever too from the surprise return of some old favourites to wonderful new characters including ‘Beat’ Takeshi Kitano as the loopy old head of a Hiroshima Yakuza family.

The whole game looks better than the series has ever done before, in fact it's spectacularly good looking in terms of both location and character design. I can't think of any other game that looks better! The characters in particular are great with some great facial detail going on although we have to admit that Haruka’s design still feels like that of a twelve-year-old girl which makes certain story elements feel a bit...icky if we’re honest. Once you’re let off the baby's leash, the gameworld is thrilling and fun and utterly immersive and interactive as NPCs run, clap, take selfies and get annoyed at you in ways other open world games could only dream of pulling off.

The game doesn't forget to innovate its minigames too even if the results are mixed. The arcades disappointingly only offer two new games (come on Sega, your back catalogue is huge!), but there's a whole new baseball team simulator to play around with. Kiryu also finds himself at the head of a street gang in a tower defense style game which allows online raids to enter the mix which is an interesting diversion even though you might wonder why Kiryu doesn't just step in himself and plow through the enemies rather than wait around (online against anyone but friends is an exercise in pain though as you’ll inevitably end up matched against someone in Japan who's spent the last year levelling their team.) There's also a crazy fishing game which sees you in a first person rail shooter blasting away at fish with a spear gun!

Racier elements are introduced in an intriguing new chat simulator which sees Kiryu hitting on cam girls. The minigame works as a proof of concept more than anything showing how the videos can be mixed and matched with the use of a simulated interrupted connection to mask the switch between the videos, and it's hilarious to see the normally urbane Kiryu acting out like a perv whilst he hammers keys with two fingers in the corner of the screen. It still needs polish though as there are too many repeated videos as you play through and only two girls to chat to. The franchise also still fails to commit to how it wants to deal with its more erotic elements. Realistically the game needs to go either full on with farcical/satirical humor or commit to the erotica. Games like the Witcher have shown that sex and nudity in games can be mainstream nowadays and if the game isnt going to commit to sex and nudity then why waste the money of the porn stars they're always hiring to perform these roles? One assumes there are women who’d sit around in a bikini for much less and look just as good!

All in all the Song of Life doesn't succeed as the great send-off that Kiryu deserved and it instead acts more as a stepping stone to whatever Yakuza 7 ends up as (it’s gonna have a barmy new lead in any case though his hair is as wonderful as Kiryu’s! Still, never say never especially these days and call me crazy but I don’t quite believe Sega when they tell us the Dragon of Dojima’s story is truly done. Ultimately Song of Life encompasses a little of everything you’ve loved about the franchise, and adds a lot of great new improvements along with the wonderfully bonkers plot and characters we've come to expect. It's not perfect though and there are admittedly some big issues but if you're at all a fan of the franchise then you won't want to miss this.

8
The Dragon of Dojima will be right with you...after he's finished changing a nappy.