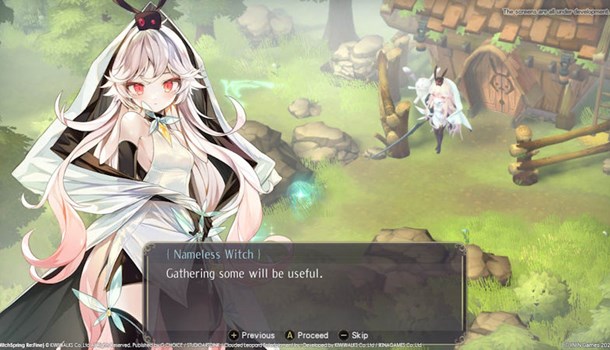 A port of the Korean mobile game by Kiwi Walks, WitchSpring3 Re:Fine is marketed as a standalone game in the franchise, in which you'll take on the role of the marionette-making witch Eriudy. Bringing the game over to the Nintendo Switch ensures a much larger audience, but also far more competition, so does Eriudy's adventure have what it takes to stand out?

Well, yes and no.

Presented in a charming chibi-style, Eriudy herself is a lovely piece of character design, with a beautifully impractical outfit gloriously complemented by one of her own creations (Failur) as a hat. The game's art style is certainly captivating, and call me a shallow tart, but that's usually enough to pique my interest. The pastel hues throughout the adventure lend the game a story-book feel which is entirely appropriate for the genre, and while it won't be challenging the graphics chips, it's perfectly pleasurable to look at. Never moreso than when it pops character art onto the screen, and you get a good look at the intricate character designs - I would love a figure of Eriudy herself, I think she's stunning.

Looks aside though, or protagonist is a bit of a dour character. Surrounding herself with magical puppets that can't speak hasn't done wonders for her charm, and as such she's rather deadpan throughout, which makes her hard to engage with. It's really a personal preference thing, but I do prefer my heroines to be a bit more fun, by and large. She finds her insular world somewhat shattered when soldiers enter her woods, and a chance encounter with a young man sets her on a path of adventure. It's a classic hero’s journey, and the game does its best to use all its charms to keep you interested. 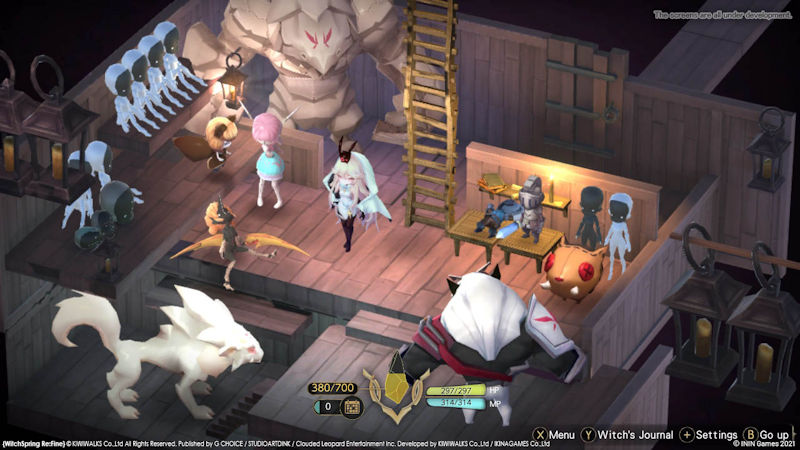 That said, her adventure is a little uninspired, with Atelier style fetch quests in order to craft items and turn-based battles that are the standard fare for this type of game, aesthetics aside it has little to make it seem particularly memorable. The magic attacks are also a bit of a chore at first, with two magic circles controlling the action - the first is your main circle, while the second controls buffs and effects that can alter the spell you're casting. It takes a bit of study to really get the most from it, and the game isn't necessarily charming enough to demand that you spend time learning detailed commands. It is great to see a main character weilding magic and a sword though, it's really rather kick-ass for such a cutesy game.

On the flipside, the turn-based and familiar nature of the action in a broader sense means that you'll be able to get the basics down pretty quickly, so it's both familiar and frustrating in equal measure. The game does introduce you to many of the mechanics via the story, so you'll be led by the hand while discovering the wider world Eriudy inhabits. She also keeps a journal as the story unfolds, so you'll be able to refresh your memory if you take any extended breaks from the game.

I mentioned that Eriudy's character was a bit dour, and that's largely down to the restrained performance of Marika Kouna, who has an extensive portfolio which includes parts in Re:Zero, Rail Wars, Overlord, We Never Learn and many others). Perhaps its becuase I'm working in Korea, but I felt the Korean artist gave a more nuanced performance. Happily you get the chance to pick from either, so have a play and see which Eriudy works best for you.

The game seems more at home in mobile mode on the Switch, no small irony given its heritage. The game design seems a little dates, only teh smooth graphics and light effects making it seem modern compared to a PS2 RPG in the same vein.  There are good ideas here that fit the theme, such Eriudy's ability to summon her marionettes in battle to use for buffs, but her sluggish movement and lack of any real challenge serve to dull these highlights somewhat.

Neither the script nor the characters are particularly memorable, which is a shame becuase I love the style of the game, it's just hard to get invested in it. Ultimately this is a cute but flawed and slightly confused RPG that doesn't do enough to stand out against the aboslute deluge of competition on the Switch platform.

Ironically, despite the games shortcomings, I may yet spring for the special edition for the artbook, as the art style is just sublime.

The latest trailer is below so you can see what I mean:

6
It's cute, but it lacks focus and drive to make it a true contender in a crowded marketplace.