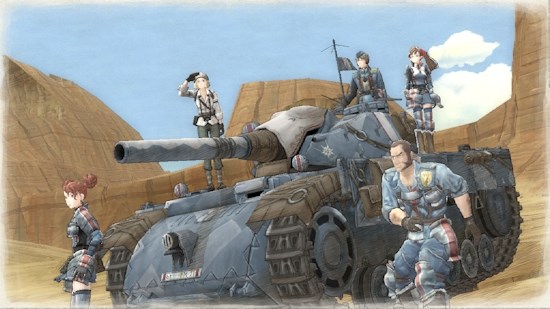 I am going to tell you a little story...

Once there was this little nerd who lived in a shoe. (It’s not a shoe, but it is a small flat!)

He had a PS3 but didn’t know what to do! (I do actually, but this rhymes!)

So he went down to Tesco and took out his card,

and discovered a game that was really quite hard (and beautiful, and addictive, and...)

That game was Valkyria Chronicles and it is honestly, from the bottom of my heart, one of the most difficult, satisfying, strategic and beautiful games I have ever come across. Want to know more? Read on.

The game is set on a completely fiction version of continental Europe which they refer to as Europa, in the year 1935. It follows a group of Gallian soldiers, Squad Seven, defending their small neutral country from the invading forces of the Imperial Alliance, to the east, which is using their small country as a stepping stone in order to attack the Atlantic Alliance to the west. I like to think of Gallia as Switzerland at this point.

The game revolves around three core characters; Welkin, who becomes the commanding officer of squad seven due to his university education; Alicia, a hot little redhead who is his love interest and is firey and just so damn cute, and Welkin’s Dark-haired adopted sister, Isara. In addition to these core characters there are many other members of squad seven who get equal amounts of character development thanks to the interviews (including cut scenes), reports and video cut scenes provided throughout the game.

The story is played out in what is referred to as the Book mode and is unlocked section by section in episodes as each mission is completed. The story unfolds entirely from the viewpoint of the members of squad seven with additional information being provided by the press as the story progresses.

Each of the members of squad seven can permanently die and can be replaced from a never-ending pool of recruits. Each character has individual attributes which makes them function better under specific circumstances, giving them individual damage and health bonuses and with the use of friendships between each of the characters, there can be additional bonuses simply for the way you put your squad together. IE, if you have friends together, their bonuses will compound.

The game itself uses a unique control system which allows for a mixture of real time and turn based strategy referred to as the BLiTZ (Battle of Live Tactical Zones) system. The game uses a Command Mode view which provides the top down layout of the map and the positioning of the enemies and friendly characters, and an Action Mode which provides a third person view where the player positions their characters. Within the Action mode there is an additional Target mode where the player can directly aim each character in order to get headshots and aim mortars and grenades where necessary. Command points, based on the number of command units and units on the battlefield; control the number of units you can move per turn and the number of Target modes you can perform per unit, as you can only take one shot per character for each command point and these points are replenished each turn.

The twist on all of these turn based features is that as you move your characters on the battlefield, you can and will be shot at as you enter the enemies line of sight thus giving a slight real time strategy feel to the game.

Long story short, and a summary of all that jargon above, is that the game uses a unique but completely intuitive control mechanism to allow for full strategic planning and movement on the battlefield.  The single most useful feature of this method of game play is that for every move you make, if you save the game correctly and between turns and movement turns, you can, in theory, never actually go wrong. As if something doesn’t work, you simply reload and try again during the battle. For me, this is simply a godsend.

The battlefields themselves are incredibly varied with the first 8 missions varying from a quiet meadow, to an urban environment, to the woods and a desert environment. Each of the various environments allow for the use of cover, limited line of sight and the various attributes of the environment to vary the style of game play between each mission.

As if this utterly compelling game play wasn’t enough, you have the artwork of the game which is entirely rendered using the CANVAS engine to resemble cell shaded art. The visuals of this game frankly have to be seen to be believed as they are just that beautiful. I mean, it’s almost cinematically good (well, enough for a OVA anime series). A good example of what can be achieved with oodles of RAM and processing power which the PS3 provides.

Combine this with the lovable and emotive character acting and the highly amusing dialogue (provided in both Japanese with English subtitles and English) and you have the perfect complete single player game and a game which has finally beaten Bioshock for pure enjoyability. Heck, take out the battles and make them cut scenes instead and you will have an anime series. And fingers crossed, that’s what the up and coming Valkyria Chronicle anime will be when it is released later this year.

If my above comments, blithering and the myriad of 90%+ review scores throughout the intarweb haven’t already made you visit an online store and place a purchase for the game, then perhaps this stern order will...