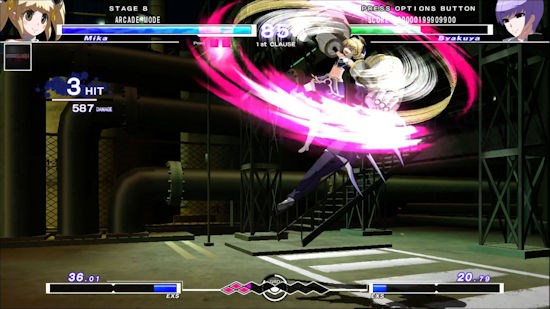 Created by software group French Bread and released by Arc System Works, Under Night In-Birth Exe: Late[st] (which is a bloody nightmare for our URL generator!) is the latest iteration of the popular Under Night franchise. The usual abbreviation for the game is UNIST, so let's use that to make everyone's lives a little easier.

The game first came to my attention on a trip to Tokyo, where it started eating all my yen. Despite this atrocious behaviour, I did come to love UNIST somewhat. The character designs are absolutely beautiful, with a creepy, Halloween style aesthetic that gives the game it's own tone. Presentation, music and graphics are all top tier (with the obvious downgrade for the portable Vita version which we'll get to).

Looks aside, this is a very deep and layered fighter, which may be easy to get into (auto combos abound), but has a lot to master, and here we have our first divisive issue.

Technical players are going to love this game. It has many combo-strings that are designed to knock an opponent in the air and keep them there. The branching nature of the pummelling you can deliver will absolutely delight those that play fighters like chess, and it delivers a number of mechanisms that will tantalise the hardcore.

On the flipside, casual gamers are going to find this very, very overwhelming. Going up against anyone who knows what they're doing is going to be an intensely frustrating experience where you will be treated very much as fodder, so this is a game you need to embrace or reject, depending on your playing preferences. UNIST is game designed for tournament play, and it cares not for your button mashing ways, filthy casuals.

With 20 characters to choose from, the game also has a wealth of variety on offer, from grapplers like Waldstein, distance beam-attack characters like Vatista and pugilists like the very cute, but big-fisted Mika. The arcade mode gives a story-line for each character, and serves as a nice warm-up to online combat that up until recently Street Fighter V was sorely missing.

If you are the target audience for this game, then the idea of meters and grids determining power levels and super-abilities will be very exciting. I have to admit that I'm slightly overwhelmed by these mechanics on initial play of these things (oh for the simple days when all you had to worry about was a health bar!) but with some study of I can usually take advantage of them. Thankfully UNIST was fun enough for me to stick with the game until these mechanics became more natural.

This is aided by the main additions to this version of the game - there's a vast tutorial mode that works very well and a Mission Mode that requires you to complete specific combos to pass, and these are excellent tools for those who wish to study the game's depth of play. For those who like to get to know the world of their game characters, there's even a visual novel nestled away in there, though the translation and spelling occasionally raises an eyebrow.

The cast includes 4 newcomers - the aforementioned Mika (a personal favourite - how many game characters that look 12 offer to "kick the shit out of yuuu!") who is a brawler, a whip wielding distance-master called Phonon and 2 more characters that are specific to the console release, martial artist Enkidu, and Wagner, a dash-style character replete with sword and shield. These are nice inclusions and from what I've played, all mix seamlessly with the rest of the ensemble.

The game comes in 3 flavours on PS Vita, PS3 and PS4 - digital, vanilla physical release and End of Dawn Edition, which was so good that despite receiving a review copy, I decided to buy it on pre-order anyway. Look for the video unboxing shortly! If you're going physical I can highly recommend the extra £10 for the special edition. It's yummy.

I also laid down for the Vita edition, as I like to play on the go. The only noticeable difference between this and the home versions is the graphical downgrade on the character models. Frame-rate seems solid and the core gameplay is still there but for a premium experience with those lovely, detailed character designs, the home versions are still king.

There's clearly a lot of value in this game - the single player content alone raises it above many other titles that see online and tournament players as the way forward, so as someone who shuns paying for PSN access, I find much to enjoy here. The anime aesthetic will doubtless appeal to readers of this very site, and given the way the game eases players in via arcade mode, frustration is at a minimum.

The launch trailer below will give you some idea of how the game flows, but for me, this is a winner.

9
A beautiful, kinetic game full of energy and character with enough depth to hold it's own in a fight against the big franchises