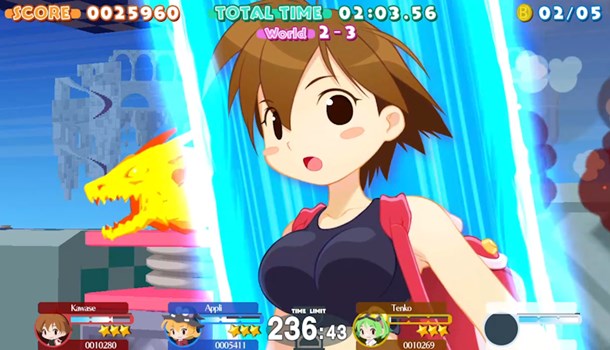 It's been 25 years since I played Umihara Kawase on the SNES, the distinct Japanese style and fun platforming action made it a bit of a niche favourite. Now, the franchise is back on the Nintendo Switch, utilising a single-screen classic-arcade setup, wherein your character has to clear the screen of enemies using their special skills and an enemy-ingesting bazooka!

The game seemingly doesn't lack for variety - 22 characters, each with their own special moves, are instantly available to you. Over 40 challenge stages are available, with a variety of traps, moving platforms and increasingly resilient enemies to dispatch, some of which require you to attack in specific ways. This can be frustrating if you need certain enemy types to enable an attack, and waiting around for one to appear can damage the flow of the game. However, it can become somewhat balletic once you master each level.

You'll need to collect a certain number of coins on each level before you can progress instead of clearing the screen. This makes coin collection your main priority instead of just clearing a set number of enemies, and in multiplayer games, this makes competition that much more fierce.

There are multiple control options available to master the fishing rod mechanic that's a staple of the series, but go for the simplest as it's really only used as an attack device and over-complicating the control scheme can make the game awkward. 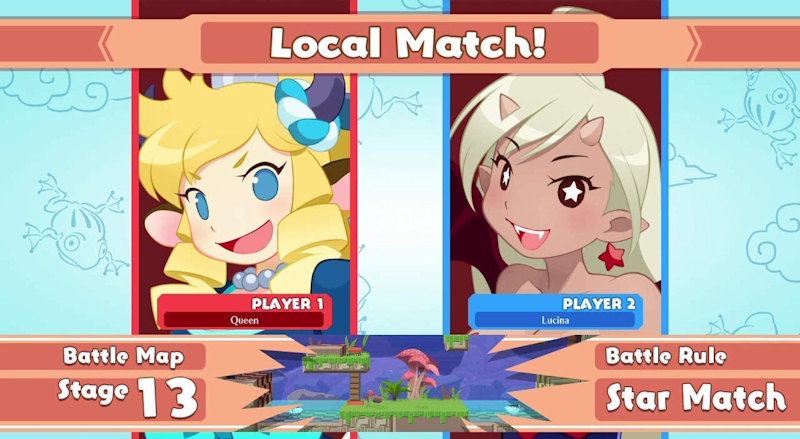 While the single player mode is fun, the multiplayer mode is where the game really puts in the effort, and this is fun in short bursts. Co-op mode requires you to avoid friendly fire, adding an extra element of danger, and versus is far more fun as you go all out against friends. It's very fast-paced and with so many characters to choose from, it'll take some time to master them all. If there's an issue here, it's with balance, and some characters are noticeably more powerful than others. While this allows you to potentially handicap more experienced players, it lacks the more balanced roster of Smash Bros., but let's not kid ourselves that Nintendo's game doesn't have the occasional overpowered character or two. 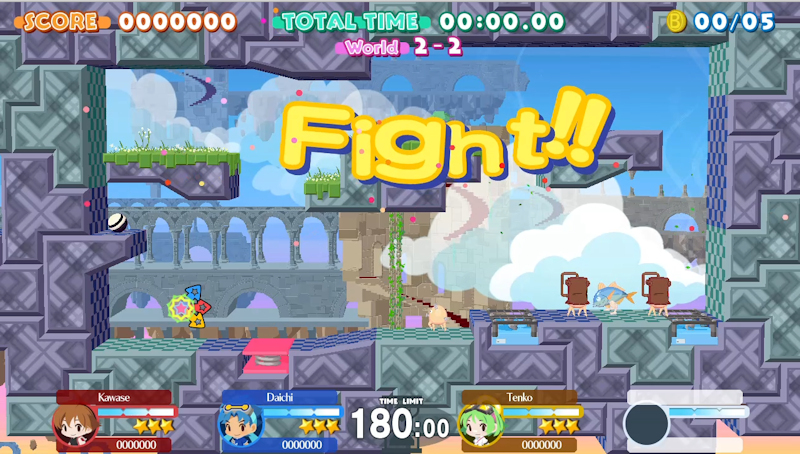 The game's pastel colours and friendly presentation belies how tough it can get...

The bright and lively presentation is very welcome, and while the levels may look like something you'd find on a mobile game, the anime stylings help maintain interest.

The real issue with BaZooKa! is that it isn't really a Umihara Kawase game - traditionally it's a series of intricate platform levels that require real skill with the rod to navigate. As a party game, this struggles to justify itself against very tough competition, be it the aforementioned powerhouse that is Smash Bros or even other classics like Bubble Bobble, which throws in 100 levels against Kawase's 40.

It's always good to see niche Japanese titles translated and released in the West, and there is fun to be had with the title. It has some issues, operating outside of its comfort zone and the sheer weight of competition on the platform. It's good, just not quite good enough to be a frontline contender.

However, if you're looking for something new for you and your friends to get into, this is a cute, fun little game that'll entertain in short bursts.

7
A fun but ultimately shallow and outmatched title on a platform bustling with multiplayer arcade fare.